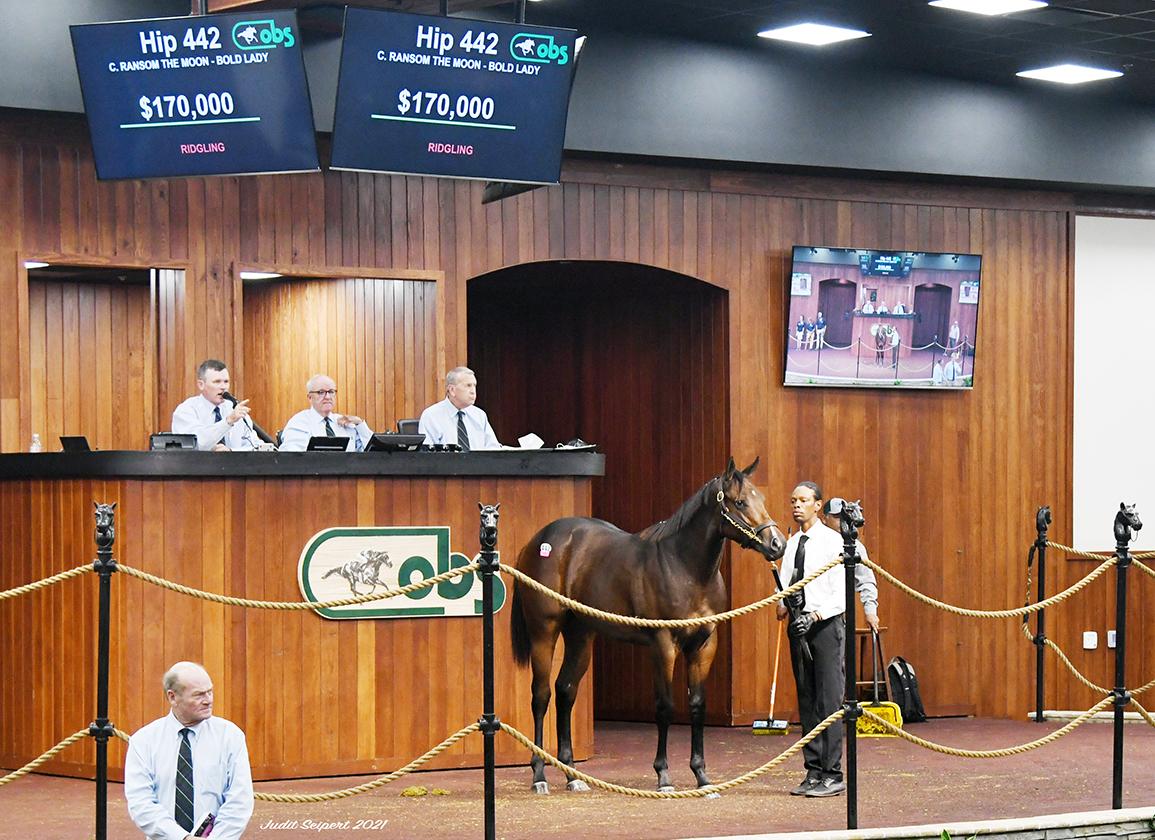 A colt by Ransom the Moon (Hip 442) topped the day's trade at the OBS October Open Yearling Sale Wednesday, bringing $170,000 from Redwings, a pinhooking group led by Ciaran Dunne and Paul Reddam.

Redwings was the top buyer by gross with their single purchase and Grassroots Training & Sales LLC was next with six yearlings bought for a total of $135,000.

“I think it just demonstrated the strength of both days,” OBS Director of Sales Tod Wojciechowski said. “It was a good day overall. There was a lot of activity from a variety of buyers.”

Hip 442 is out of Bold Lady (Aikenite), who is a half-sister to SW & GISP Mambo in Seattle (Kingmambo) and the dams of GSWs Stay in Seattle (Stay Gold) and Sky Kingdom (Empire Maker). The Apr. 10 foal, who cost just $11,000 at last year's Keeneland November sale, hails from the extended female family of the legendary A.P. Indy, Summer Squall, Wolfhound, et al.

Wednesday's most expensive filly was a $100,000 daughter of Awesome Slew (Hip 406), who was purchased by Brandon and Ali Rice's RiceHorse from the consignment of Camelot Acres Racing and Sales, agent. A late May foal, hip 406 is a half-sister to two-time turf-sprint stakes winner Hear My Prayer (The Big Beast), victorious in a salty Del Mar turf sprint allowance for owners David and Holly Wilson and trainer Vladimir Cerin Aug. 26.

Jill and Robert Jones's Endsley Oaks Farm, based in Brooksville, Florida, typically has about 10 homebreds to look forward to each year, but with only weanlings on the ground this year and no mares in foal, the couple decided to try out the yearling market. They were able to acquire a filly by Kantharos (hip 2087) for $25,000 at last month's competitive Keeneland September sale and purchased an additional seven yearlings at this week's Ocala Breeders' Sales Company's October sale. The most expensive of the group was a $62,000 daughter of Kantharos (hip 28) and a $60,000 daughter of first-crop Florida sire Tunwoo (Medaglia d'Oro) (hip 49).

“We have been involved in racing, mostly in Florida, but also some other states, for about 10 years,” Jill Jones said. “I grew up with Thoroughbreds because I used to get them off the track and do eventing when I was younger. In the '80s, my husband had a string of Thoroughbreds to race in Massachusetts. So when we moved to Florida, we thought, 'We're here, we both like Thoroughbreds, so we decided to slowly get into it. And the next thing you know we have a huge stable of horses.”

Endsley Oaks, a 1200-acre farm in Hernando County, is home to some 80 horses, including broodmares, lay-ups and retirees. The operation has about 25 horses in training.

“We just came back from Monmouth for the summer and we are giving them a break before Tampa Bay Downs,” Jones said of the racing stable.

The star of the Endsley Oaks stable is the multiple stakes placed No Mercy Percy (Put It Back). The 7-year-old homebred mare has earned over $121,000 to date.

Rafael Schistl trains for the couple and was involved in picking out the OBS yearlings. A licensed trainer in the U.S. since January, the Brazilian former jockey rode in Norway, Denmark, and Sweden, as well as Dubai, Germany, France, New Zealand, Italy and Switzerland.

“I met up with him when he came to my farm to ride some of my horses and I just really liked him,” Jones said of the trainer. “He did really well for us at Tampa and pretty well for us at Monmouth as well.”

Of the yearling buying spree, Jones explained, “I breed a bunch, but I didn't breed any last year. So I have weanlings, but I wanted something coming up. I have bought 2-year-olds–and I can't tell you I haven't had good luck with them–but I don't really like the 2-year-olds in training sales. I think it puts too much stress on the 2-year-olds, so I thought I would try the yearling route to see how that worked out. So I guess it's a little bit of a new direction.”

The Joneses are semi-retired from Composite Motors, Inc., a company founded by Robert Jones which produces high-quality and high-precision electronic products for extreme environments.

“My husband started it and I am the General Counsel,” Jill Jones said of the company. “He's the brains behind it, but we are both a little older so his kids are running the day-to-day of it. So he and I have more time to enjoy the farm.”