Raising Racehorses in the Desert 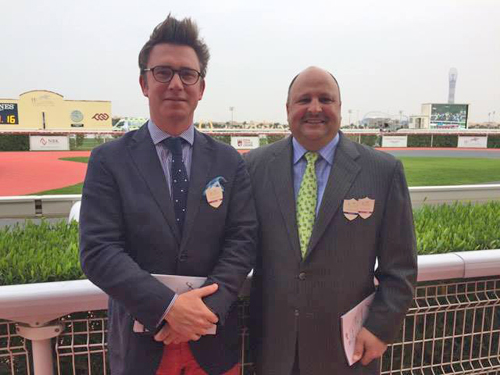 DOHA, Qatar–The Thoroughbred has its heritage in the Middle East, tracing back to the Arabian horses that originated and thrived in the desert so many years ago. Raising modern Thoroughbreds in these regions poses challenges; however, numerous nurseries in Qatar are doing so with success. Even across the Gulf in Dubai, a small breeding program run for a few years by Sheikh Mohammed bin Rashid Al Maktoum produced American Grade I winner Balletto (UAE) (Timber Country).

Sheikh Mohammed bin Khalifa Al Thani's Al Shahania Stud is among the latest nurseries undertaking the challenge of breeding Thoroughbreds in the desert. Al Shahania has about 500 horses under its banner worldwide, comprising Thoroughbreds, Purebred Arabians and show horses. Its colours have been carried successfully in Europe and the U.S. by the likes of Group 1 winners Flotilla (Mizzen Mast) and Vorda (Fr) (Orpen), and on Saturday Ebraz (GB) (Amer) showcased the best of its Purebred Arabian program when winning the HH The Emir's Sword, the world's most prestigious race for that breed.

“The quality of racing continues to get better and better here,” said Dean Lavy, who has served as assistant manager of Al Shahania Stud for four years. “When I came here, a pretty good handicap-type Thoroughbred could win a lot of these big races and we weren't actively involved in that part of it. Now that we are, it truly takes a consistent Group 2, Group 3 horse to come in here and win these big races. The quality and quantity of horses has probably doubled at least since I've been here.”

“A few of these owners–Sheikh Abdullah with Umm Qarn, Sheikh Joaan with Al Shaqab–these guys are going big and buying nice horses and it has really improved the quality and is making everyone step up. Now we have to step our game up. We brought 12 Thoroughbreds here this year and we've got a couple that are nice, but you need to focus on what's right for Doha.”

Given his background in the Thoroughbred industry, it's a good bet that Lavy's contributions will help Al Shahania and Doha make great strides. As the former manager of the Maktoum family's Gainsborough Farm in Kentucky, Lavy had his hands on some of the world's best stock and best property, and he admitted raising horses in Qatar is quite different. He said the most important thing that needs to be managed is the heat.

“The weather is a big concern and you have to manage that because it's so hot,” he said. “Here in the summer it doesn't necessarily get reported a lot–they don't always tell you how hot it is, sometimes it's 50 degrees [celsius], so that's pushing 130, 140 [fahrenheit] with the humidity. So the horses have to be managed differently that time of year. They can still go out at night but they'll get extremely hot. All our stables are air conditioned.”

The landscape in Qatar is understandably in stark contrast to the rolling Kentucky bluegrass, and the low levels of rain and sandy terrain means all grass is heavily irrigated with deep wells. As such turnout space is much more limited, meaning young horses have much less opportunity to run and develop strength. Lavy pointed out that one development since his arrival at Al Shahania has been the addition of larger paddocks. While the farm traditionally had smaller sand paddocks of about a tenth of an acre, about 20 paddocks have been added, some two to three acres on grass.

“A lot of horses are confined a lot more than they would be in the States, so we've tried to expand that to get the young horses out,” he explained. “You don't get that concussion at an early age and I think it makes a big difference, so that's one thing we're trying to improve. A lot of the areas they'd go out in in the past were very small areas, so they couldn't get a big run in.”

While adding paddocks may not seem the most tedious task on farms in Europe or America, it is an arduous task in Qatar.

“Building paddocks at home in Kentucky, you put the fence in and get the grass ready and it's ready to go,” Lavy said. “Here, you're dealing with sand. Fence posts have to be concreted in. You have to bring in black dirt, which is basically broken down cow manure, you have to bring in a clay product, you have to lay all your irrigation lines to water everything, and in the summer it's watered every day. We're lucky at Shahania–we have a very good ground water source there. We have about 21 wells we operate off of and it's very good water.”

As the local grass–a Bermuda grass supplemented a few months of the year with rye grass–has no nutritional value, high-quality feed is imported: hay from the U.S. and grain from Europe. Lavy said the main concern with this process is keeping tabs on supply.

“Keeping a good supply is crucial because it takes anywhere from four to six weeks for a container to come from the U.S., so you really have to have a constant order in process, and then it could come here and get hung up in customs,” he said. “Most everything we get comes from Europe and the U.S.–that's any horse product, equipment, anything, so logistically you have to learn how to manage that.”

Lavy added, “I brought a nutritionist here from the States that we used to use at Gainsborough and we tested everything to get a baseline to know what we're dealing with and everything is pretty good. Nothing is super nutritional, but there's nothing wrong with it. So you just have to balance it, because we don't get the rich grass.”

Varying environments naturally lead to different health concerns, and Lavy said there are a few things to watch out for with Qatari foals.

“They're a little more prone to rhodococcus and pneumonia here as young babies because they don't get to go out in the heat so they're in AC a lot,” he noted. “Sand colic, we don't get that many. It's very rare. We get gas colics because we swim a lot of horses, from the pressure of the swimming pools. But to raise a horse here hasn't been too bad.”

Having spent his life in America, a land of instant gratification, Lavy said the general change of pace in Qatar has been one of the greatest adjustments.

“Dealing with all the government issues, the ministries; it's a different world,” he said. “We don't have all the conveniences [like in America]. Vet care and medicines aren't that accessible. You can get them, but again timing is an issue. The quality of vet care is getting better all the time, but it's not at a level it would be at in the States and in Europe. That's something you have to have in the back of your mind in case something goes wrong.”

Lavy said the Al Shahania team has made a conscious decision to build its Thoroughbred holdings slowly, focusing on quality and waiting until it has the proper infrastructure in place. Al Shahania's 12 Thoroughbreds in Qatar include three broodmares due to foal this year and two 2-year-olds.

“They're a smaller horse; when you see them in the ring you'll see that there's a size difference. It's the challenge of being able to grow them properly and having the facilities to do that. We kind of wanted to wait with the local-breds until we were ready for them. And we're still not quite ready, but we're close. We're dabbling in it a little bit. Hopefully we'll eventually have 10 to 15 mares here that we breed locally.”

Due to the rapid growth of the Qatar racing industries, there is also talk of a new racetrack in the near future.

“They have big plans, they're moving in the right direction,” Lavy said. “I think the next 10 years will be very interesting here.”

The latter statement can be applied to Qatar as a whole. Everywhere one looks there is construction, giving the feeling that big things are on the horizon for the country.

“There's a huge construction boom here,” Lavy said. “You drive around and it doesn't look like they've got anywhere, but they have. It's very similar to what Dubai was 20 years ago; literally everywhere you go here is under construction.”

So after four years, what is it like as an American living in Doha?

“A lot of people think it's an unsafe environment, but it's been really friendly; I literally have not even seen a fist fight here,” Lavy stressed. “The crime is virtually none–laws for that are very strict. There are no weapons here–you can't own a weapon. I'm sure there are drugs at a high level, but the common people don't have them. It changes everything. They're super, super friendly people. They're very soft, the Qatari people, very genuine and trustworthy. I've done really well here, and my wife loves it. I will go back home someday, because Kentucky is my home, but it's worked out well for me here. We live down at the marina at The Pearl, which is absolutely beautiful down on the ocean. The quality of life here is very good. A lot of people say there's nothing to do here, but it's what you make of it.”

Indeed, it seems that Al Shahania, and Qatar racing as a whole, is making the most of every opportunity.