Rain a Fitting Tribute to Violette 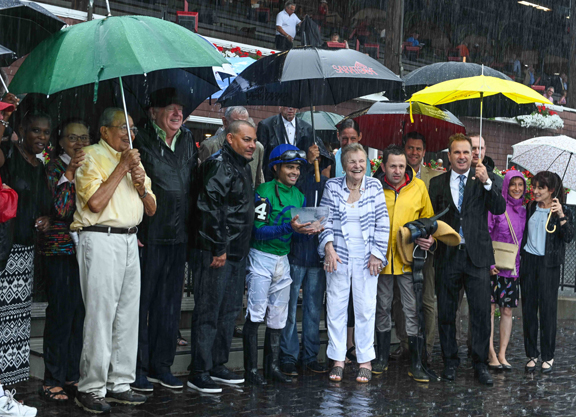 Saratoga Springs, N.Y. – Deja vu? Oh, yeah. A couple of weeks shy of a year after he saddled Diversify (Bellamy Road) to win the 2018 GI Whitney S., the late trainer Rick Violette was honored Wednesday on another very wet and stormy day at Saratoga Race Course.

Led by his mother, Bea, members of Violette's family and his friends gathered in the winner's circle in a driving rain following a race carrying his name. Violette, a skilled horseman who died of lung cancer.

The New York Racing Association moved the Rockville Center for 2-year-old New York-breds from Belmont Park this year and renamed it to salute Violette. Sky of Hook (Tapiture), trained by Rudy Rodriguez, prevailed by a nose over the sloppy, sealed track, the same type of surface Diversify relished in the Whitney.

Bea Violette said NYRA officials offered to move the trophy presentation under the stands behind the winner's circle, but she was undeterred by the rain.

“It doesn't matter,” she said. “They said, 'We can stay inside and you don't have to go out, but it won't be televised in here.' I said, 'No, I want to go outside. So many people know that I'm here and they expected to see me. We'll go outside.'”

So they did. The group gathered around winning jockey Luis Saez smiling for photos under umbrellas included Violette's brother Chris, retired trainer Mike Hernandez, Violette's longtime assistant Melissa Cohen and retired track announcer Tom Durkin. Some folks, unprepared for the deluge that prompted NYRA to cancel the steeplechase that was the first race on the program, watched from under cover.

Cohen spent 15 years working for Violette and handled the barn when he was busy with NYTHA duties and when he was ill. She was upbeat as she talked about her feelings during the event.

“Just a lot of good memories,” Cohen said. “It's a day to celebrate Rick's life and what he has accomplished and how he made this industry and everyone around him better people.”

Cohen acknowledged the weather parallel with the Whitney and nodded to the people gathered under the stands.

“It's a good crowd,” she said. “It just seems to want to rain on Rick's parade quite a bit and it still does, but we make the most of it. It's still a day of celebration for everybody.”

Bea Violette made the trip from Boynton Beach, Florida for her son's race. She described him as very modest–called him “a perfect son”–and said he did not tell his family about his accomplishments, on the track or in the boardroom, where he was a fierce advocate for horsemen and backstretch workers.

“When he was sick, he was like that, too,” she said. “He never complained about a thing. Everything was fine. He was just so good. He was just so patient. He never complained about a thing. And that's not like him. He wanted the best of everything. The barn better be clean. Everything should be neat. When he was sick he said, 'I don't want any drama.'”

Earlier in the day, NYTHA pledged $25,000 to Mercy House of Saratoga, Inc., a new non-profit created to provide temporary residences for a wide range of people in need. The money will be used for the construction of a 6,000 square-foot suite of rooms–named for Violette–to serve backstretch workers from Saratoga Race Course, within a four-story, 30,000 square-foot building to be built on Washington Street by Bethesda Episcopal Church.

A monumental storm forced NYRA to delay the running of the Whitney while the horses and their connections waited in the saddling shed. When the weather improved, speedy Diversify rolled through the mud to give Violette the final graded stakes victory of his career.

“We weren't there, but it had to be the biggest moment in his life,” Bea Violette said. “He didn't intend to have him run. He said, 'The horse is telling me. Listen to the horse.' And he did.”