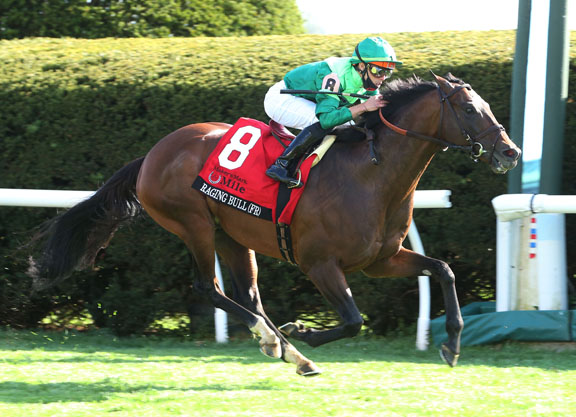 Having last tasted victory in the GI Shoemaker Mile last May, Peter Brant's Raging Bull (Fr) (Dark Angel {Ire}) exploded from off the pace to comfortably best 8-1 chance Ride a Comet (Candy Ride {Arg}) in Friday's GI Maker's Mark Mile at Keeneland. Settled in a rail-hugging fifth behind Get Smokin (Get Stormy) through opening fractions of :22.47 and :45.65, the 7-2 chance made a big move to get into contention approaching the quarter pole, swung out three wide to take control at the head of the lane and drove clear to score by two lengths over the game Ride a Comet. Chad Brown-trained stablemate Sacred Life (Fr) (Siyouni {Fr}) was third.

“He was traveling so good down the backside,” said Ortiz Jr. “I was close to the leaders. I tried to stay in contact with the field. He broke sharp today. I had an advantage there. The first turn, I let him run then I slowed him down. He relaxed so well. He was like three or four lengths behind the leaders. I said I'm just gonna wait until it's time to go. By the three-eighths pole, I saw some separation, so I went for it a little early. He responded well, so I just went for it. He still had something at the end.”

“Both horses [Raging Bull and stablemate and third-place finisher Sacred Life] ran great, especially given the layoffs they were facing,” added Brown. “Raging Bull got a great trip and setup. He's much more effective with a solid pace in front of him. Irad deserves a lot of credit for getting him into the race early and securing a great spot into the first turn.”

Winning four of six to start his career as a 3-year-old, including victories in the GII Hall of Fame S., GIII Saranac S. and Manila S., the 2016 Goffs September buy recorded his first win at the highest level in the 2018 GI Hollywood Derby at Del Mar. Despite failing to score in five starts as a 4-year-old, he earned second in the GI Fourstardave H. and third in the GI Manhattan S. before getting promoted to third via DQ in that season's GI Woodbine Mile. Kicking off 2020 with a confident score at the Grade I level at Santa Anita, the French bred was a close-up third in last year's renewal of this race before finishing fifth in the Fourstardave at the Spa. A good second in the GI Shadwell Turf Mile in Lexington in October, the 6-year-old finished 10th in his latest start in the Nov. 7 GI Breeders' Cup Mile.

Pedigree Note:
Raging Bull, one of seven Group 1/Grade I winners for Dark Angel, holds the distinction of being the Yeomanstown Stud stallion's second North American Grade I winner, following Hunt (Ire) in 2018. One of two winners from four foals to race thus far out of his French SP dam, Raging Bull is a grandson of Rolly Polly was an Italian highweight filly at two and annexed both the GII Senator Ken Maddy S. and GIII Las Cienegas S. going down the hill at Santa Anita. Bought by Brant's White Birch at Goffs November in 2016, Rosa Bonheur is responsible for an unraced juvenile full-brother to Raging Bull named Bobbie D (Ire) and a yearling brother by Dubawi (Ire).