Raging Bull Much the Best in Shoemaker Mile 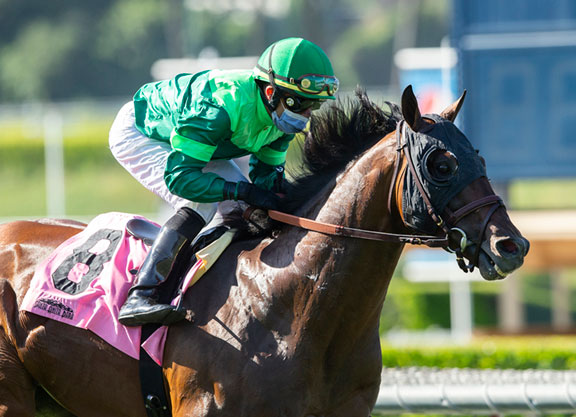 Taking advantage of a scorching pace in front of him, Peter Brant's Raging Bull (Fr) (Dark Angel {Ire}) produced a slingshot, wide move on the far turn and kept on going to dominate the GI Shoemaker Mile S. Monday at Santa Anita, the first Grade I event at the Arcadia oval since it reopened for racing. The victory in the Win & You're In event punched Raging Bull's ticket to the GI Breeders' Cup Mile.

Winning four of six to start his career as a 3-year-old, including victories in the GII Hall of Fame S., GIII Saranac S. and Manila S., the 2016 Goffs September buy shipped west to score his previous top-level victory the GI Hollywood Derby at Del Mar in his sophomore finale. He failed to find the mark in five starts as a 4-year-old, however, finishing fourth in both the GI Maker's 46 Mile S. and GI Old Forester Turf Classic S., third in the GI Manhattan S., second in the GI Fourstardave H. and a troubled fourth–elevated to third via DQ–when last seen in the GI Woodbine Mile S. Sept. 14.

Let go as the close 29-10 second choice behind 2-1 stablemate Without Parole (GB) (Frankel {GB}), the bay broke near the back of the field and settled third-last as Voodoo Song (City Zip) and Neptune's Storm (Stormy Atlantic) went at it through a sizzling :22.16 quarter with War of Will (War Front), making his 4-year-old bow, a close and tugging third. Those three, plus GI Frank E. Kilroe Mile S. hero River Boyne (Ire) (Dandy Man {Ire}), bunched up past a :44.75 half, and Raging Bull and Without Parole started to draw in midway around the far bend. Looping around rivals under Joel Rosario while Irad Ortiz, Jr. tried to thread the needle aboard the favorite, Raging Bull stormed to the lead in the five path passing the furlong grounds and kicked clear to a convincing win. Without Parole only found room in the final sixteenth and was edged in a photo for second by 18-1 Next Shares (Archarcharch).

“He broke well and it looked like there was a good pace, he was very controlled,” said Rosario, who has ridden Raging Bull in 11 of his 13 career starts. “He just came with his run like he does all the time. He put in a nice run. It's beautiful, nice to be back here and be back in action.”

Raging Bull is one of seven Grade I/Group 1 winners for Yeomanstown Stud's star sire Dark Angel, as well as one of his 58 stakes winners and 31 graded/group stakes winners. He is Dark Angel's second North American Grade I winner, following Hunt (Ire), who won this very event two years ago, and one of two winners from four foals to race thus far out of his French SP dam. Second dam Rolly Polly was an Italian highweight filly at two and annexed both the GII Senator Ken Maddy S. and GIII Las Cienegas S. going down the hill at Santa Anita. Bought by Brant's White Birch at Goffs November in 2016, Rosa Bonheur is responsible for an unraced 3-year-old Siyouni (Fr) filly named Siyoubaby (Ire) and a yearling full-brother to Raging Bull.