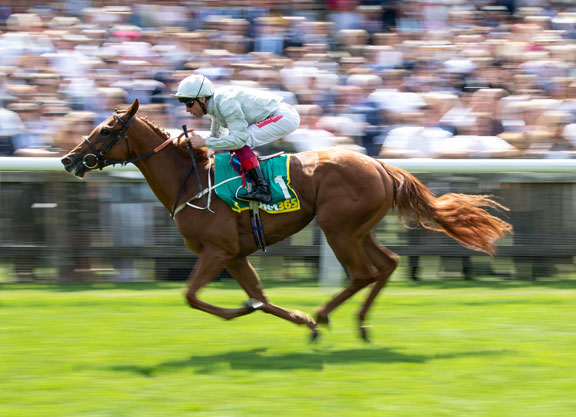 Sheikh Hamdan bin Mohammed’s Raffle Prize (Ire) (Slade Power {Ire}), winner of the G2 Queen Mary S. and G2 Duchess of Cambridge S. and a neck second to Earthlight (Ire) (Shamardal) in the G1 Prix Morny, is set to line up next in the G1 Juddmonte Cheveley Park S. at Newmarket on Sept. 28.

“The Juddmonte Cheveley Park S. was the only place we wanted Raffle Prize to go after her run in the Morny,” said Charlie Johnston, assistant to his father trainer Mark Johnston. “She’s in great order and it’s been ‘all systems go’ with her since France. She did everything bar win a very good renewal of the Morny. That performance proved that she was the leading filly in Europe and we’ve not seen anything since, in the Lowther S. or anywhere else, that might scare us. If she turns up at Newmarket in the same form as we had her in France she should take plenty of beating.

“Raffle Prize handled the heavy ground in the Morny simply because she is very good, but I’m pretty sure that testing ground does not play to her strength as she has so much speed,” Johnston continued. “It was Earthlight’s stamina that came into play and won him the day in the last 100 yards. She’s only had five starts and they’ve been nicely spaced out, so she’s not had a crazily busy campaign and we are looking forward to Newmarket. Win, lose or draw, that is almost certain to be her last start of the season.”

Looking ahead to next year, Johnston said, “Her potential stamina over more than six furlongs is a question for next spring, though I would like to think that any filly who wins the Cheveley Park would be given a Guineas preparation with the option of then dropping back in trip for the Commonwealth Cup.”