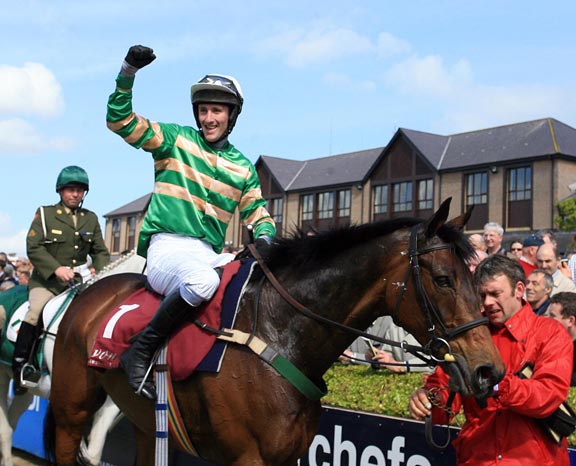 Tributes have been paid to former leading amateur rider John Thomas 'JT' McNamara, who died on Monday night at his home in Co Limerick at the age of 41.

Considered one of the best amateurs of his generation, the Irishman won major races at Aintree and the Cheltenham Festival, including the 2012 National Hunt Chase aboard Teaforthree (Ire). Twelve months later he suffered severe paralysis in a first-fence fall from Galaxy Rock (Ire) in the 2013 Fulke Walywn Kim Muir Challenge Cup at Cheltenham.

Remembering his colleague in a broadcast on BBC Radio, the most successful jump jockey of all time, Sir Anthony McCoy, said, “JT was a very tough man, very mentally tough, and has been for the last three and a half years since his accident. He was a brilliant amateur jockey and a great horseman.”

British Horseracing Authority Chief Executive Nick Rust added his voice to the tributes, saying, “None of us will forget his four Cheltenham Festival winners, in which his remarkable talent was so clearly highlighted. Nor will we forget the day of his accident. The entire sport shared in the concern for JT. Nowhere was this more evident than among his fellow riders, who came together to show support for a popular colleague and a great horseman.”

He added, “JT rode over 600 winners in a wonderful career and brought joy to so many along the way. Today all our thoughts are with his family and friends.”

McNamara is survived by his wife Caroline, sons Dylan and Harry, and daughter Olivia.