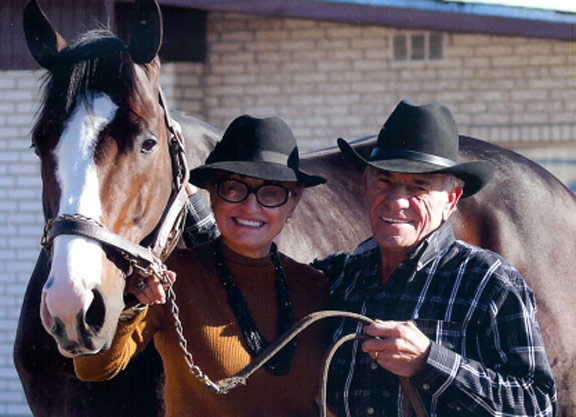 A love of horses is in the blood of every member of the Asmussen family and their roots in racing run deep, from Marilyn and Keith Asmussen’s days in Quarter Horse racing back in the early 1970s to their sons Steve and Cash, who are both Eclipse Award winners. Even their grandchildren are all involved with horses in one way or another.

Keith and Marilyn Asmussen transitioned from Quarter Horses to Thoroughbreds decades ago and since then have produced some of the industry’s brightest stars at their El Primero Training Center in Laredo, TX, from 1991 G1 Prix de l’Arc de Triomphe Suave Dancer to leading sire and Grade I winner Tapit and his champion daughter Untapable.

“My husband was a [Quarter Horse] jockey when we got married 56 years ago,” Marilyn Asmussen explained. “I got my first training license in 1974 in New Mexico and that is probably around when we got some Thoroughbreds. We were living in Laredo and training mostly Quarter Horses, but the airport closed, the peso devaluated and the cattle business went down. A lot of our Quarter Horse people went out of business, so we thought if we were going to continue to make a living in the racing industry, we had to change our strategy a little bit. We left the racetrack and built the training center in Laredo in 1980 and broke and trained Thoroughbred yearlings to send to other trainers, which is something we still do.”

At age 76, Marilyn Asmussen has turned her focus to the administrative side of their business, focusing on advertising, public relations, foal registration, etc. Meanwhile, Keith Asmussen, also 76, supervises the daily training of all the youngsters at El Primero. The couple also runs the Asmussen Horse Center, where they keep their mares, two stallions, and a plethora of riding horses; and offer a yearly consignment at the Fasig-Tipton Texas 2-year-olds in training sale.

“We generally get the yearlings between September and January,” said Marilyn Asmussen. “After the sales, and a little before sometimes, Keith likes to ride them for 30 or 40 days and give them a little basics. Then he will give them a 30-day rest and put them back in training. About Feb. 1, he x-rays the knee closures and the 2-year-olds that have A knees, he goes on with; and the ones that have B and C knees, he just kind of goes on without giving them any extended work until their knees are closed. That is basically how the 2-year-old is developed here.”

About three-quarters of the horses broken and trained at El Primero go to the Asmussens’ son Steve, who was inducted into the Racing Hall of Fame last year.

“The majority of our horses are for people we have trained for for quite a while and Steve has developed horses for,” Marilyn Asmussen said. “A lot of times Steve will buy horses, particularly at in training sales, that need gate experience or work on the track and he will send them down here for a while. It works out very well for everybody.”

Some of those longtime clients include Vern Winchell, who has been succeeded by his son Ron. The Winchells recent successes with the Asmussen family include Tapit, GI Kentucky Oaks and GI Breeders’ Cup Distaff heroine Untapable and MGSW and GISP Tapiture (Tapit).

“We trained for Vern and sent horses to Ron McAnally since 1981,” Marilyn Asmussen said. “He has stood by Steve. He has been loyal and supportive, and we have had a lot of luck for him with Tight Spot, Olympia, Sea Cadet just to name a few, who have all made a million dollars or more. We also had Tapit, Untapable and Tapiture.”

His parents’ facility has also produced some of his more recent stars in GII Saratoga Special S. winner and “TDN Rising Star” Copper Bullet (More Than Ready) and stakes winners Buy Sell Hold (Violence) and Direct Dial (Too Much Bling).

When asked how his parents’ training program compliments his own, Asmussen said, “My program is an extension to what my dad does. For lack of a better term, it is the common sense approach he has to it and how well he relates to the horses. I try to continue to do that. The whole barn implements that into how we handle the horses. That is the core of what our barn does and will try to continue to do.”

The conditioner continued, “You are talking about Laredo, Texas, and Tapit himself, as well as Suave Dancer, an Arc winner. For them to have their early schooling there, speaks for itself. The [GI] Belmont S. winner [Tapwrit]’s sire [Tapit] and dam [GISW Appealing Zophie (Successful Appeal)] got their start in Laredo. That is one of the beautiful things in racing that you have these legacies and are able to add to them.”

The Asmussens have produced a total of five Eclipse winners at El Primero, but not all of them of the equine variety.

“We have had five Eclipse award winners, including [our older son] Cash Asmussen [who was leading apprentice jockey] and Steve Asmussen twice. We have had 13 millionaires and at least 250 stakes winners, including an Arc winner, Suave Dancer, who Keith purchased him for Henry Chalhoub, broke and sent to France. One of the slogans I use for advertising is, ‘an internationally known family tradition in racing.'”

The family tradition in racing started at a young age for Steve and Cash Asmussen, who hung up his jockey silks in 2001 and now trains a string at his parents facility.

“Cash and Steve went to the barn everyday because daycare wasn’t available and even if it was, we wouldn’t have been able to afford it anyway,” Marilyn Asmussen said with a laugh. “They started their ‘college’ education very young.”

Steve Asmussen, who has trained the likes of Hall of Famers Curlin and Rachel Alexandra and likely Horse of the Year Gun Runner (Candy Ride {Arg}), credits the education and foundation his parents gave him with his success in the industry.

“Everything I do relates to my upbringing and my childhood being around the barn,” he said. “Cash and I grew up in the barn and learned how to do things right, which has everything to do with the success that we’ve both had.”

Asmussen continued, “I now know how blessed I was to be around such incredible horsemen. It’s tough to put into words, but as far as a horseman, there is no substitute for my father. It is amazing to watch. My mother is actually the sweetest person in the world. I am positive that everything good that happened in my life, happened because of something she did. For mom and dad to have raised two kids and both of them to win an Eclipse and everything with the training center is rare and I hope they are proud of that accomplishment”

Marilyn Asmussen’s immense pride in her sons’ accomplishments can be heard in her voice when she speaks about them.

“It is very satisfying and heartwarming for parents to see their children be able to pursue careers and a way of life that they would absolutely choose to do,” she said. “I don’t have to tell you, in order to be successful in the racehorse industry you have to have a tremendous amount of determination and dedication and you have to love the horse.”

The Asmussen family matriarch still gets overwhelmed with emotion when talking about her son Steve’s greatest accomplishment, his 2016 Hall of Fame induction.

“It still chokes me up to talk about it,” Marilyn Asmussen said. “That is the height of acknowledgment of his accomplishments to be honored by his peers. For a parent, it is very gratifying.”

The Asmussens may not have set out to make racing the family business, but they have done that and then some, creating a lasting legacy that will impact the Thoroughbred industry for years to come.

“I don’t think we started out with [a family business] as a goal, but the love of family is one of God’s greatest gifts,” Marilyn Asmussen said. “As that family grows and develops, you want to keep them close to you. What better way to do that than through a business that you all love? I supposed you would have to say horses were kind of inbred in Cash and Steve.”