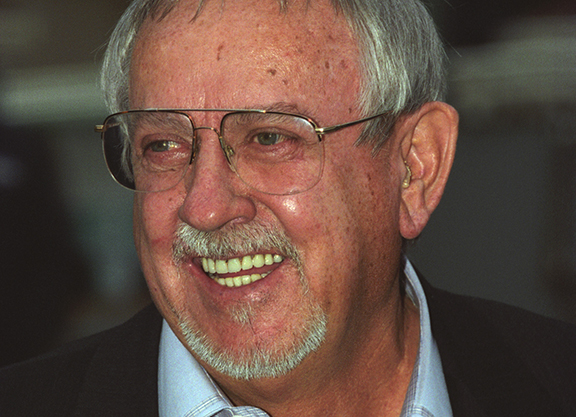 R.D. Hubbard, who honed his work ethic in Kansas wheat fields and at his family’s ice house and then parlayed a wealth of hands-on experience into a long run as an internationally acclaimed auto glass entrepreneur, visionary racetrack operator, and an enthusiastic owner and breeder of Quarter Horses and Thoroughbreds, died Wednesday night at his home in Palm Desert, California. He was 84 years old.

Hubbard’s death was confirmed by his family.

Hubbard leaves a legacy rooted in the power of hard work, optimistic tenacity, and a knack for knowing how and when to seize opportunities. He made his own breaks and was unafraid to gamble his own money on unorthodox business ideas that he felt strongly about. As a mentor to others, “Dee” often underscored the need to have a driving passion for what you do in your career.

For decades, Hubbard was one of the most visible boosters of Quarter Horse racing, and he achieved Hall-of-Fame status within that sport by campaigning 14 champions and scores of stakes winners while serving in numerous capacities that advanced the industry. He was known for his transformational majority ownership of Ruidoso Downs, which now hosts the world’s richest Quarter Horse race, the $3 million All American Futurity.

Although Hubbard had also been involved in the Thoroughbred side of breeding and racing, it wasn’t until his 1990 takeover as the Hollywood Park majority shareholder that Hubbard registered as a pioneering pari-mutuel maverick by introducing a number of customer-centric concepts that, in retrospect, now seem years ahead of their time.

One of the reasons Hubbard achieved self-made success in his many ventures was a genuine interest and willingness to listen to both employees and customers. In his early days at Hollywood, he could be found most mornings astride his pony, Mr. Paint, making rounds on the backstretch. Afternoons he’d chat amicably with two-dollar bettors in the grandstand to get a better idea of what they wanted.

“R. D. Hubbard was truly a larger-than-life human being,” said Tony Allevato, the Chief Revenue Officer for the New York Racing Association who got his first full-time job in the industry from Hubbard in 1993 when he was hired as Hollywood’s Broadcast Publicist. “When I asked to see him, there was no job available, so I was just pitching myself for a position. They had told me I’d have a half-hour with him, but when I got there, they told me that he was behind schedule, and I’d only have four minutes. I had memorized my opening line, but after that, I think I started to babble. When I was done, he asked me how much it was going to cost him to have me do all of these wonderful things for him, and I said that it didn’t matter what he paid me, I just wanted the opportunity to show him what I could do. Years later, I found out that’s why hired me.”

“He had an amazing presence that was noticeable the moment he walked into a room,” Allevato continued. “Whether it was a C.E.O., a politician, a colleague or a custodian, Hubbard treated everyone he met with dignity and respect. He was so impressive, yet so approachable.”

At his glass factory it was no different: Hubbard liked to walk the production line, stopping to ask for feedback from longtime workers and often inquiring about their family members by name.

Randall Dee Hubbard was born during the Great Depression in Smith Center, Kansas, on June 13, 1935. He was the eighth child of his family, and by age 11, he was lugging 50-pound blocks of ice to neighbors from the family-owned ice house.

When refrigerators rendered that business obsolete, Hubbard, at 14, strung power lines to farm houses for the Rural Electrification Agency. In high school he worked building highways, and after graduation, Hubbard took whatever work he could, washing bottles, toiling as a farm hand from Texas to North Dakota, and selling brushes and shoes door-to-door.

In 1954, Hubbard enrolled at Butler County Community College in Kansas. After two years, he accepted a position as a teacher and basketball coach in Towanda, Kansas, for $3,200 a year. In 1959, married for the first of three times and to better support his children, he became a salesman for a glass company in Wichita.

Hubbard worked his way up from that $90-a-week job to becoming the president of Safelite Auto Glass. In 1978, he formed his own glass company, AFG Industries, by acquiring two debt-ridden companies and merging them. Eventually, AFG grew to be the second-largest glass manufacturer in North America.

According to a 1991 Sports Illustrated profile, Hubbard bought his first Quarter Horses in 1969, eventually adding in Thoroughbreds and building the stable to over 100 horses in training, plus breeding stock.

With a partner, the late Edward Sczesny, Hubbard established the 235-acre Crystal Springs Farm in Paris, Kentucky. Either as a solo owner or in one of over 20 Thoroughbred partnerships he was involved in, Hubbard over the years campaigned horses like Corwyn Bay (winner of the 1988 Cartier Million in Ireland); Fire The Groom (winner of the 1991 GI Beverly D. S. at Arlington Park), and multiple graded stakes winners such as Gentlemen and Spring House.

Hubbard owned breeding shares in a number of Thoroughbreds, including Alleged, the two-time winner of the Prix de l’Arc de Triomphe, and the leading sire Danzig. At the 1984 Keeneland November sale, he partnered in selling a filly for $750,000, at the time the highest price of any weanling ever sold at auction.

“There’s nothing like the feeling of seeing your own horse win. Nothing,” Hubbard told the Los Angeles Times in 1995. “The greatest thrill, of course, is winning when you’re not supposed to, when the odds are against you.”

When Hubbard bought into Ruidoso in 1988 (he would end up retaining an ownership interest in it for 30 years), he expanded the track configuration and created a separate chute to be used exclusively for Quarter Horse races, a unique first. When he was granted a license to build a track in Kansas, he designed the Woodlands so it could accommodate both horse and greyhound races, another novel concept. He was eventually an executive of Multnomah Kennel Club and Turf Paradise, and in 2003, he headed a group that was awarded the license to build Zia Park.

Some Thoroughbred traditionalists didn’t quite know what to make of Hubbard when he took over Hollywood Park for the final decade of the 20th century, and horsemen in particular were initially leery about his then-outlandish idea of marrying racing with other forms of gaming, which he launched in the pre-racino era by getting a card club legalized on the track’s grounds.

Yet Hubbard eventually proved to be ahead of his peers in believing that horse tracks needed to embrace the Las Vegas model of identifying and rewarding their best customers. He was also an early adopter of simulcasting. Even Andrew Beyer of the Washington Post, a tough critic of racetrack operators, wrote in a 1994 column that because of Hubbard’s efforts, “Virtually every Southern California horseplayer now thinks of Hollywood as the track that cares most about its fans.”

Hubbard helped to create the National Thoroughbred Racing Association, and as a member of that organization’s board of directors, he co-founded its Racing Integrity and Drug Testing Task Force. He also served on the Breeders’ Cup board of directors.

“Holly and I got to know Mr. Hubbard–I always called him Mr. Hubbard–when we worked for Barry Weisbord (read tribute here)‘s Executive Bloodstock ,” said Craig Bandoroff. “To say that he was a larger-than-life figure doesn’t really do him justice. He loved to have a good time and he commanded and lit up the room wherever he happened to be. He was the best example of the American Dream that I have ever known. If he could do something for you, he went out of his way to do it. When Holly and I bought our first house in 1986, Mr. Hubbard arranged the mortgage for us. He was one of the first to give Holly and I a chance and help launch our careers at Denali Stud. His definition of good luck is one I think of often. He said, `Good luck is when hard work and opportunity meet.’ He was one of the opportunities in our lives and in many others.”

Hubbard had a keen interest in fine art, and a collection of 19th-Century Western art that he bought for $15 million in 1989 went on a display at a museum he constructed for it at Ruidoso. His family also sponsored a $250,000 annual prize for an art competition. Other philanthropic endeavors included the formation of the R.D. and Joan Dale Hubbard Foundation (dedicated to providing and improving educational opportunities) and the Shoemaker Foundation (named for legendary jockey Bill to raise funds for horsemen suffering from catastrophic accidents or illnesses).

In 2014 Hubbard was presented with a Horatio Alger Association of Distinguished Americans award, which recognizes exceptional leaders who have overcome significant personal challenges to achieve success.

“From a racing standpoint, he was as equally passionate as he was innovative,” said Allevato. “I never sought to have a mentor in my life but I am fortunate enough to call R. D. Hubbard that. For me personally and for many that he came in contact with, he taught us the importance of work ethic, accountability, the willingness to take chances and most important of all: loyalty. There will never be another R. D. Hubbard. Horse racing and I are better because of him.”

Hubbard is survived by his wife, Joan Dale McLain Hubbard, and three children.