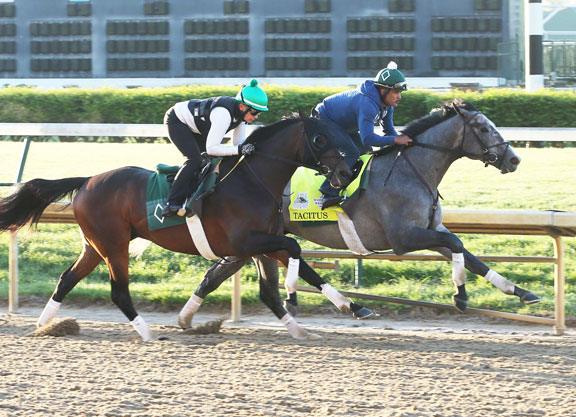 Tacitus (inside) breezing in company | Coady

Four contenders for next Saturday's GI Kentucky Derby recorded official breezes Monday at Churchill Downs, headlined by Juddmonte Farms' Tacitus (Tapit), who went an easy half-mile in :50 flat (50/79) under exercise rider Juan Quintero. The gray colt sits at the top of the Derby points leaderboard with 150, coming by virtue of scores in the GII Wood Memorial S. and GII Tampa Bay Derby.

“It was his first work since the Wood Memorial and I thought it was very good,” trainer Bill Mott said. “He doesn't work fast; he does what his companion does. I thought his gallop out was very good.”

Mott, whose first Derby starter came in 1984, will be trying to win the Run for the Roses for the first time. Hofburg's seventh-place finish last year produced Mott's best result from eight starters.

“You always want to feel like you have a chance, even if you are 20-1,” Mott said. “You always think that and I think that way for him. He is very well bred, has a good race record and seems to be a horse on the improve.”

WinStar Farm and China Horse Club's Improbable (City Zip) breezed a half-mile as well, which drew a surprise appearance from trainer Bob Baffert, on his way to Ocala for Tuesday's OBS April Sale. The Grade I winner covered the distance in :48 flat (4/79), clicking off fractions of :11.80, :23.40 and :35.60 and galloping out five furlongs in 1:01.40.

“I haven't seen press like that since Santa Anita closed,” Baffert joked as he met a large contingent of the news media. “I picked a beautiful day here. He went really nice. I liked the way he bounced over the track. Everybody is happy with him.”

Improbable breezed without blinkers after getting agitated while wearing them prior to his runner-up finish in the GI Arkansas Derby Apr. 13. Baffert confirmed that the shades would be removed for the first Saturday in May.

Also on the worktab for the Derby were Allied Racing Stable's GII Louisiana Derby upsetter By My Standards (Goldencents), who went six furlongs in 1:12 4/5 (2/5) and Willis Horton Racing's Long Range Toddy (Take Charge Indy), who drilled five panels in 1:02 3/5 (29/35).

“That was about as good as you can get two weeks out from the race,” trainer Bret Calhoun said of By My Standards. “This horse is just hitting his best stride and I think that's what we'll see from him going into the Derby. I put the work off a little bit due to weather but he really showed his stuff this morning. I'm not taking a sigh of relief yet but I feel really pleased by the way he went this morning.”