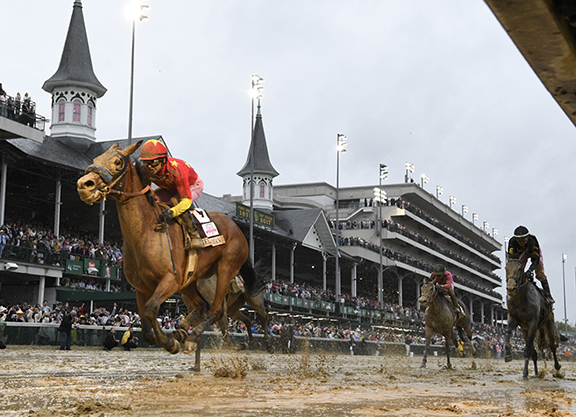 Pace truly did make the race for the China Horse Club and Clearsky Farm's Abel Tasman (Quality Road), who showed why you can never count Hall of Famer Bob Baffert out on a big day, especially when teamed with “Big Money” Mike Smith, with a resounding last-to-first victory in Friday's GI Kentucky Oaks. Let go at 9-1 while adding blinkers for this start, the bay stumbled a step as she exited post 13 and caboosed the field early as heavily favored “TDN Rising Star” Paradise Woods (Union Rags) was hard-pressed by MGSW Miss Sky Warrior (First Samurai) through taxing early splits of :22.79 and :46.24. Creeping up the three path with 5/8ths left to run, Abel Tasman began to pick up steam approaching the far turn and was way out in the center of the track, but not too far off the dueling leaders, turning for home. Paradise Woods called it a day at the top of the stretch and Miss Sky Warrior briefly tried to go on with it, but was quickly overtaken by Abel Tasman and Vexatious (Giant's Causeway) on her outside and Lockdown (First Defence) to her inside. Abel Tasman was always going best of the three, however, and powered clear in the final sixteenth to take home the lillies. Daddys Lil Darling (Scat Daddy), winner of this venue's GII Pocahontas S. last term, came flying late up the outside to complete the exacta.

“It's just exciting to win the Kentucky Oaks,” Baffert remarked. “We'd like to have a horse in the [GI Kentucky] Derby but I'm so happy for the China Horse Club. They trusted me with the filly. And 'Big Money' Mike, what can you say? Incredible ride. We knew she was doing really well coming into this race. We got a nice, hot pace and it worked out. They were going pretty fast but I have a lot of respect for Paradise Woods and she was getting a lot of pressure. About the three-eighths pole he started moving and I thought we might have a shot. She's a beautiful filly to train. She shipped beautifully and we knew we had a chance.”

“Immediately after her second-place finish in the Santa Anita Oaks, [Bob and I] both realized she probably needed a slight blinker,” Smith commented. “I hit the front a little sooner than I wanted and I was afraid she'd pull herself up, but she stayed focused and galloped out even better. If you surround yourself with good people, good things happen. It's just like your mom always told you. I surround myself with Bob Baffert and other great trainers and owners and this is the outcome.”

As for beaten favorite Paradise Woods, who faded to 11th, Hall of Famer Richard Mandella said, “What are you going to do? That big race at Santa Anita [the GI Santa Anita Oaks] might have taken a little too much out of her.”

Breeder Clearsky Farm decided to keep Abel Tasman to race after the filly RNA'd for $65,000 at the 2015 Keeneland September yearling sale. Placed in the care of trainer Simon Callaghan, she checked in fifth behind subsequent GI Chandelier S. third Zapperkat (Ghostzapper) in her six-furlong unveiling at Del Mar Aug. 20, but rebounded to earn her diploma next out when extended to a mile at Santa Anita Sept. 30. Capturing a Del Mar allowance Nov. 18, the bay continued that win streak with a 12-1 upset of the GI Starlet S. at Los Alamitos Dec. 10.

Abel Tasman certainly did not disgrace herself when a game second behind “TDN Rising Star” Unique Bella (Tapit), who was considered the divisional leader at the time, in the GIII Santa Ysabel S. back in Arcadia Mar. 4. Teo Ah Khing's China Horse Club bought into the filly following that effort and she was subsequently transferred to Baffert. The conditioner called on fellow Hall of Famer Mike Smith for Abel Tasman's debut for Baffert in the GI Santa Anita Oaks and she checked in a game second once again behind a powerhouse performance from Paradise Woods, who ran away to a 11 3/4-length victory.

Harvard-educated architect Teo Ah Khing, whose design firm is responsible for the Meydan Racecourse grandstand, founded the China Horse Club in 2010. It is a lifestyle club whose goal is to connect the Chinese, not only to racing, but to industry leaders around the world. They have found quick success on an international level, campaigning the likes of MG1SW Australia (GB) (Galileo {Ire}), GI Frizette S. heroine Yellow Agate (Gemologist), MGSW Exaggerator (Curlin) and Australian Group 1 winner Fast Seal (Aus) (Fastnet Rock {Aus}). Click here for a TDN Weekend feature on Teo (page 43).

“We have over, I think, about 800 million people reaching out in China,” Teo said. “And we hope that today's race, which is very significant, will put the geographical location and the significance of Kentucky Oaks in the mind of the Chinese, to understand the significance of this race and being here with my family, Ivy and Johanna. And we are very, very happy, I would say.”

It has been an exceptional recent few months for Abel Tasman's breeder, the Cleary family's Clearsky Farms, which bred champion and Longines World's Best Racehorse Arrogate (Unbridled's Song). They are also the breeder of MGISW sprinter Lord Nelson (Pulpit) and GIII Fantasy S. winner and “TDN Rising Star” Ever So Clever (Medaglia d'Oro), who finished ninth in the Oaks.

Baffert and Smith's accomplishments speak for themselves. The two have enjoyed plenty of success as a team in the past six months thanks to exploits of “TDN Rising Star” Arrogate, last seen scoring an unbelievable victory in the G1 Dubai World Cup Mar. 25. It was the third Oaks win for the Triple Crown-winning trainer, who took the 1999 renewal with Hall of Famer Silverbulletday and the 2011 edition with Plum Pretty. Smith took his first Oaks just four years ago when upsetting four-time Eclipse winner Beholder with 38-1 shot Princess of Sylmar (Majesticperfection).

Abel Tasman is the most recent produce out of Vargas Girl, who was purchased for $130,000 at the 2010 Keeneland January Sale carrying her third foal by Sky Mesa. The winner's year-older half-sister Moonlight Sky, also by Sky Mesa was purchased for $285,000 by Mark Casse on behalf of John Oxley at the 2014 Keeneland September sale. Winning one of nine starts, she sold to Triton Stables for $240,000 at last term's Keeneland November sale, just a few weeks prior to Abel Tasman's first Grade I victory. Vargas Girl is a half-sister to GISW Bevo (Prospectors Gamble) and GSW Moonlight Sonata (Carson City), who produced GSWs Wilburn (Bernardini) and Beethoven (Sky Mesa), as well as SW La Appassionata (Bernardini).