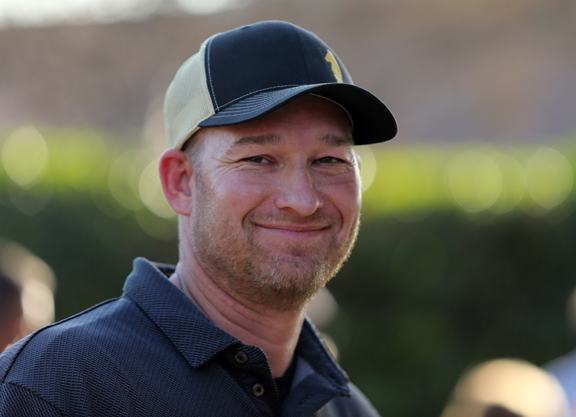 Topping the sale was a $120,000 colt by the red-hot Quality Road consigned by Adrian Gonzalez's Checkmate Thoroughbreds LLC as hip 164. He was scooped up by O. J. Jauregui, agent for Highland Yard.

Checkmate sold three of the day's top four offerings. All were purchased at Keeneland September as part of a pinhooking partnership.

Hip 164, just an $18,000 KEESEP acquisition, hails from the female family of champion and top sire Speightstown (Gone West) and his star-crossed half-brother Irap (Tiznow), a standout sophomore of 2017.

“The sire was a major draw–we were looking for that type of pedigree,” Gonzalez said when asked what the appeal was of hip 164 back in September. “Sometimes they'll slip through the cracks for whatever reason and we were just kind of sitting there waiting. We had purchased probably 15 altogether. We had taken some from that same September sale right into Barretts October, and kept some for this January sale and we also have some for the 2-year-old sales. It's kind of just a matter of finding some soft spots in the sale and seeing if we can find a better spot to put them.”

When asked to describe the colt physically, Gonzalez said, “Physically, he was very, very mature; a masculine, strong colt. He was a carbon copy of his sire–just big, strong–maybe a little coarse, but that's kind of how those Quality Roads come.”

Checkmate consigns horses at almost all Barretts sales, and Gonzalez says it's just a matter of finding the right horse for the right auction.

“We just buy them, get them home and kind of evaluate them as far as when they're going to look the best,” he said. “Some of them just seemed like they needed more time, and some were ready now. I have a good, steady base of buyers out here who I feel like we can sell them a good horse at any time. It doesn't necessarily need to be at a 2-year-old in training sale. If we have a good one ready to present to these buyers, they'll pay us for them.”

Barretts General Manager Kim Lloyd was pleased with the overall results of the sale.

“We're very pleased,” Lloyd said. “Broodmares are a hard sell, but horses who are racing or horses with promise who can go to the track or are close to filling a stall for these trainers are very valuable and there are a lot of buyers for them.”

He continued, “There's a big demand. The $120,000 they gave for that big, good-looking colt was a good price. There were a lot of bidders and a lot of people interested in him. For those type of horses that you can take to the barn or feel like you're going to get to the races with at Del Mar this summer, there's a lot of people to buy those horses.”

Barretts had previously announced that it would donate 10% of its proceeds of the sale to the California Thoroughbred Horsemen's Foundation to go towards relief from the San Luis Rey Downs fire, and auctioned off stallion shares and other items to raise money for the same cause.

For complete results of the sale and more information, visit www.barretts.com.