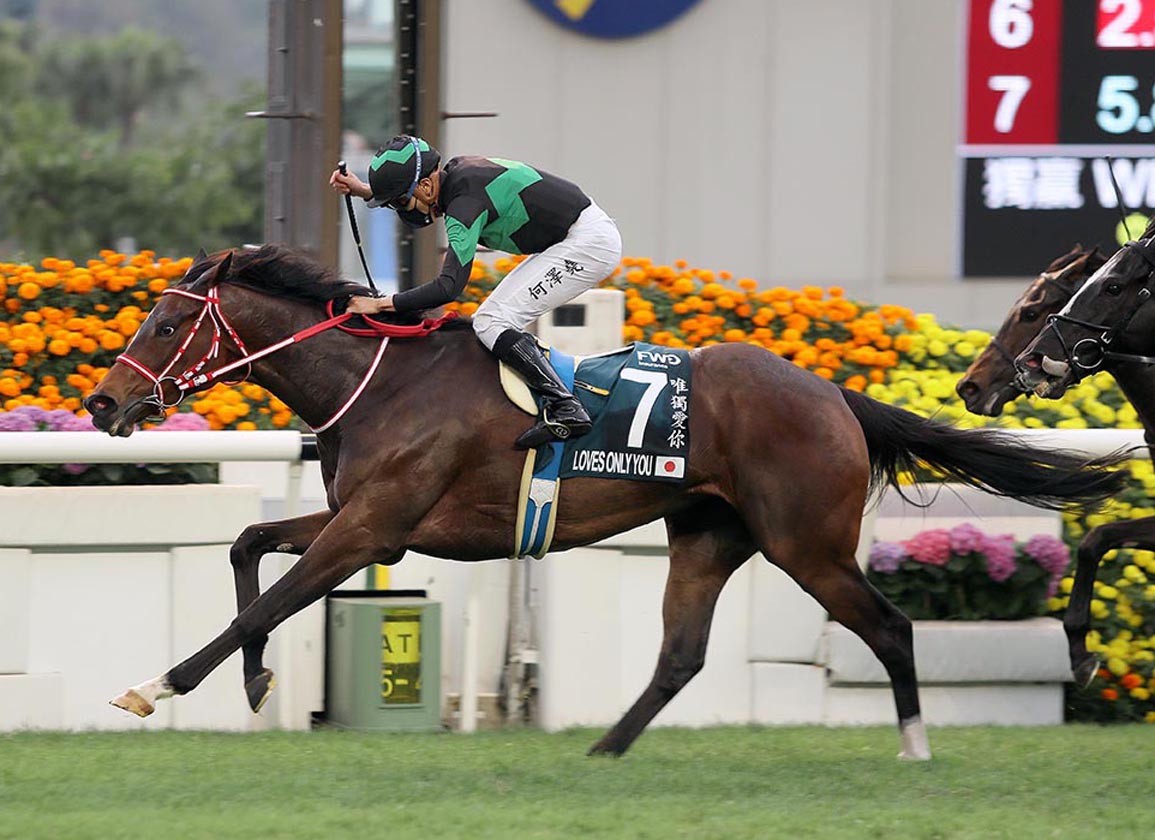 Loves Only You (Jpn) (Deep Impact {Jpn}) and a team of five from Ballydoyle headed by defending G1 Longines Hong Kong Vase hero Mogul (GB) (Galileo {Ire}) are among a list of 49 world-class gallopers that have been extended invitations to the 2021 Longines Hong Kong International Races to be staged Sunday, Dec. 12, at Sha Tin Racecourse. Some 22 of the invitees have already struck at Group 1/Grade I level.

Following her history-making performance in the GI Maker's Mark Breeders' Cup Filly & Mare Turf at Del Mar Nov. 6, the 5-year-old Loves Only You is set to journey from California to the same course and 2000-metre distance over which she won the G1 FWD QE II Cup on her world travels this past April as she swansongs in the G1 Longines Hong Kong Cup. She is set to be joined in the day's richest event by Lei Papale (Jpn) (Deep Impact {Jpn}), victorious in this year's G1 Osaka Hai and perfect in a pair of starts at 10 furlongs, as well as the less-heralded Hishi Iguazu (Jpn) (Heart's Cry {Jpn}).

The Japanese challenge numbers fully 10 of the 21 overseas-based horses and also includes Danon Smash (Jpn) (Lord Kanaloa {Jpn}), one of three horses back to defend their titles from 2020. The 6-year-old, whose sire was a spectacular two-time winner of the G1 Longines Hong Kong Sprint, exits a sixth in the G1 Sprinters' S. behind 3-year-old Pixie Knight (Jpn) and 4-year-old filly Resistencia (Jpn) (Daiwa Major {Jpn}). The former is a son of Maurice (Jpn), winner of both a G1 Long Hong Kong Mile and Hong Kong Cup. While the connections of Schnell Meister (Ger) (Kingman {GB})–Japan's best miler not named Gran Alegria (Jpn) (Deep Impact {Jpn})–have passed on the Mile, four others will have a crack at Horse of the Year Golden Sixty (Jpn), including Danon Kingly (Jpn) (Deep Impact {Jpn}), who upset the recently retired Gran Alegria in this year's G1 Yasuda Kinen. Glory Vase (Jpn) (Deep Impact {Jpn}) looks for a second G1 Longines Hong Kong Vase in three years, having been given a peach of ride by Joao Moreira to score in 2019.

Mogul will try to join former Ballydoyle inmate Highland Reel (Ire) (Galileo {Ire}) as two-time winners of the Vase and will attempt to become the first to go back-to-back in the race since Doctor Dino (Fr) (Muhtathir) in 2007/2008. His Aidan O'Brien stablemates Japan (GB) (Galileo {Ire}, Cup), the year-older full-brother to Mogul and a latest fourth in the GI Longines Breeders' Cup Turf; and Breeders' Cup Turf runner-up Broome (Ire) (Australia {Ire}, Vase) are also among those receiving invitations, though their participation hinges squarely on their performance in and well-being following this weekend's G1 Japan Cup. Bolshoi Ballet (Ire) (Galileo {Ire}), winner of this year's GI Belmont Derby, is also invited to the Vase, while G1 QIPCO 1000 Guineas heroine Mother Earth (Ire) (Zoffany {Ire}) is penciled in for the Mile.

The form of the G1 QIPCO Champion S. will be tested in the Cup by the William Haggas-trained Dubai Honour (Ire) (Pride of Dubai {Aus}), beaten three-parts of a length into second by Sealiway (Fr) (Galiway {GB}) in the Ascot centrepiece Oct. 16, and the third home that day, Mac Swiney (Ire) (New Approach {Ire}), whose trainer Jim Bolger sent out Alexander Goldrun (Ire) (Gold Away {Ire}) to win the Cup back in 2004.

The Vase has lured an additional pair of interesting runners from Europe, including Pyledriver (GB) (Harbour Watch {Ire}), upset winner of this year's G1 Coronation Cup at Epsom who resumed from a five-month break to score impressively in the Listed Churchill S. over the Lingfield all-weather Nov. 13. Aga Khan homebred Ebaiyra (Distorted Humor) was a two-time winner at group level in France earlier this year for Alain de Royer-Dupre and ran Broome to one length in the G1 Grand Prix de Saint-Cloud in July.

PYLEDRIVER proves a switch the the All-Weather is no problem and runs out a classy winner of the Betway Churchill Stakes.pic.twitter.com/h9xAqUGHJh

In addition to Golden Sixty, who figures a prohibitive favourite to run his current winning streak to 16 in the Mile, other top contenders from Hong Kong include Panfield (Chi) (Lookin At Lucky, Cup); the progressive Lucky Patch (NZ) (El Roca {Aus}) and Wellington (Aus) (All Too Hard {Aus}) in the Sprint; and Columbus County (NZ) (Redwood {GB})–second to Panfield in the course-and-distance G1 Champions & Chater Cup–in the Vase. Reliable Team (NZ) (Reliable Man {GB}), who won the G2 BOCHK Jockey Club Cup (2000mT) Nov. 21, stretches out in trip for the Vase.

“The Longines Hong Kong International Races (HKIR) is firmly established as one of the world's principal racing events and this year we will welcome an extraordinary line-up from Japan, Great Britain, Ireland and France which includes 16 individual Group 1 winners,” said Andrew Harding, Executive Director, Racing, for the Hong Kong Jockey Club. “To have runners of this calibre in any year would be notable but once again it is truly remarkable given the challenges of the COVID-19 pandemic.”