QIPCO 2000 Guineas: where did they come from? 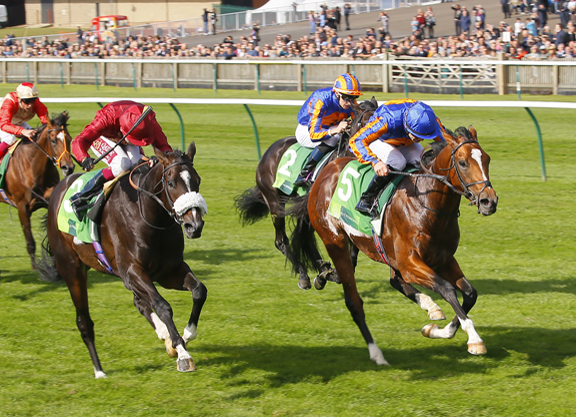 From a $6,000 yearling to millionaires' row, the line-up for the first British Classic of the season features some smart homebreds along with sales graduates for almost every pocket.

Last seen finishing runner-up over course and distance to fellow Guineas contender Military March in the G3 Autumn S. last October, this Meon Valley Stud-bred colt was a 1.1 million gns purchase at Book 1 of the Tattersalls October Yearling Sale. His dam was runner-up in both the Oaks and Irish Oaks and her first two foals are both multiple winners, including Telecaster (GB) (New Approach {GB}), winner of last season's G2 Dante S. A sixth-generation descendant of Meon Valley's blue hen Reprocolor (GB).

The G2 Coventry S. winner who chased home Pinatubo for second in the G1 Darley Dewhurst S., Arizona was bought as a foal by Charles Briere of Fairway Consignment for 65,000gns before being sold on to Coolmore for €260,000 at the Arqana August Sale. His year-older sister Nay Lady Nay won the GII Mrs Revere S. over 8½ furlongs for Chad Brown at Churchill Downs in November. He shares his grandam Bright Generation (Ire) with the G1 Prix Morny winner Dabirsim (Fr).

A maiden winner over seven furlongs of the July Course on his sole start last August, Cepheus was sold privately for €70,000 after being led out unsold at the Arqana August Sale. His dam was unplaced in two starts and is a daughter of Yousefia (Danzig), a sister to the former leading sire and top-class sprinter Green Desert (who is also Cepheus's paternal great grandsire).

Bred by David and Trish Brown and sold by their Furnace Mill Stud for 360,000gns at Book 1 of Tattersalls October Yearling Sale, his dam's listed-winning full-sister has produced the G3 Greenham S. winner James Garfield (GB), who was seventh in the Guineas two years ago. Juan Elcano, named after the Spanish explorer, won his maiden on heavy ground at Haydock over seven furlongs and has twice been placed at Group 2 level over the same trip on good to firm.

Bred in Lexington by Calumet Farm, Kameko represents the same team, same sire and same sale behind the late 3-year-old champion as Roaring Lion. A $90,000 Keeneland September purchase by David Redvers for Qatar Bloodstock, his dam Sweeter Still was bred by Annemarie O'Brien and is a half-sister to G1 Racing Post Trophy winner Kingsbarns (Ire) (Galileo {Ire}). She ran just once in Ireland before being sold to race in California, where she won the GIII Senorita S. over a mile on turf. Like his relative Kingsbarns, Kameko won the race now known as the G1 Vertem Futurity Trophy which last year was switched to the all-weather surface at Newcastle owing to waterlogging at Doncaster.

Cleverly bought by Chad Schumer and Johnny Collins, he was a $6,000 Keeneland September yearling who was resold through Collins's Brown Island Stables at the Goffs UK Breeze-up Sale for £45,000. His grandam Khazayin (Bahri) is a sister to the Arc winner and Derby runner-up Sakhee, while Miesque features twice in the fourth generation of his pedigree, as the great grandam of Karakontie and as the dam of Kingmambo, Lemon Sakhee's grandsire.

Kinross was bred at Lawn Stud by his owner, the TBA Chairman Julian Richmond-Watson, who tasted Classic success in the Oaks of 2008 with Look Here (GB) (Hernando {Fr}). His dam was a listed winner over ten furlongs and is out of a half-sister to the GII Virginia Derby winner Battle Of Hastings (GB) (Royal Applause {GB}). A highly impressive eight-length maiden winner over seven furlongs on the Rowley Mile, he was subsequently fifth in the G1 Vertem Futurity Trophy.

Unbeaten in two starts for Saeed Bin Suroor, including the G3 Autumn S. on the Rowley Mile, Military March is a Godolphin homebred out of the G1 Yorkshire Oaks winner Punctilious who was third to Ouija Board in the Oaks.

Looked a man among boys when posting a jaw-dropping performance to win the Goffs UK Premier Yearling S. by 11 lengths over six furlongs on the Knavesmire and was subsequently down the field in the G1 Middle Park S. Bred by Abbey Bloodstock, he was bought as a foal at Goffs by Joanna Morgan for €26,000 and subsequently sold to Peter and Ross Doyle for £45,000 at the Premier Sale.

The first foal of the G1 Yorkshire Oaks and G2 Debutante S. winner Tapestry, he was bred by a partnership which includes the Niarchos family and Coolmore. Grandam Rumplestiltskin (Ire) was also a Group 1 winner and she is herself a grand-daughter of Miesque. New World Tapestry won a seven-furlong maiden on the Rowley Mile in September but was well beaten in the G1 Vertem Futurity Trophy and appears to have a bit to find to live up to his illustrious pedigree.

Winner of a seven-furlong maiden at Glorious Goodwood, Persuasion was seven lengths behind Wichita (Ire) when second in the G3 Somerville Tattersall S. over the same distance. He was sold for 155,000gns as a foal by his breeder Norelands Stud and resold through Pier House Stud for 220,000gns at Book 1 of the Tattersalls October Yearling Sale to Michael Roy, son of his owner Susan Roy. His half-sister Cristal Fizz (Ire) (Power {GB}) won the listed Radley S.

Homebred by Godolphin, as was his dam, the French ten-furlong listed winner Lava Flow. As the highest-rated juvenile for 25 years he is on paper the one to beat.

A leading light from the first crop of his Guineas-winning sire, Royal Dornoch was third in the G2 Richmond S. before breaking his maiden on soft ground at Gowran Park in September. He was then last of five in the G2 Champagne S. before springing a bit of a surprise to beat Kameko in winning the G2 Royal Lodge S.

Like his father, he is named after a Scottish golf course, Royal Dornoch being a stunning links course in the north-east Highlands.

Just the one winning run for this colt to date over a mile on Kempton's Polytrack in December. Bred by Qatar Bloodstock and Newsells Park Stud from the dual Group 3 winner Purr Along, he was her second foal and was bought by his trainer Hughie Morrison with SackvilleDonald for 125,000gns at Tattersalls October Book 1.

Breeder Max Ervine sold Wichita as a yearling through Keith Harte for 140,000gns to Coolmore at Book 2 of the Tattersalls October Sale. He raced solely at seven furlongs in his four starts last year, which included winning a Curragh maiden on debut in August a month before beating Persuasion in the G3 Somerville Tattersall S. He concluded his season with a third-place finish to Pinatubuo and Arizona in the Dewhurst. Wichita's dam won a listed sprint in Germany for the Moussac family and is a half-sister to GI Woodford Reserve Manhattan H. winner Desert Blanc (GB).

This story was posted in Europe, Shared News Europe and tagged Arizona, G1 QIPCO 2000 Guineas, Kameko, Newmarket, Pinatubo, Royal Dornoch, Where did they come from?, Wichita.