Q&A with Shug McGaughey, Trainer of Code of Honor 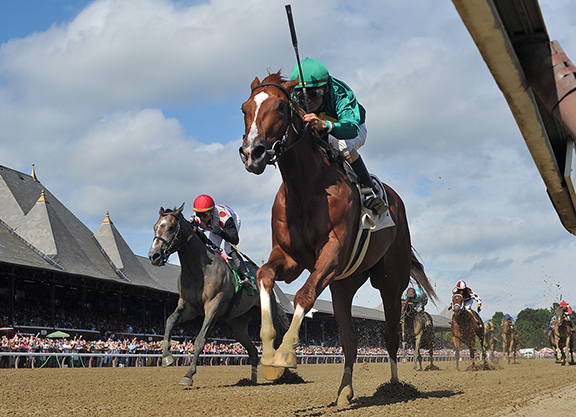 With War Front's War of Will sitting on top of the TDN Triple Crown Top 12, and Noble Mission (GB)'s Code of Honor, second in last fall's GI Champagne S., getting ready to run in Saturday's GII Fountain of Youth S., horses by sires normally thought of as producers of turf runners have shone on the GI Kentucky Derby prep stage. The TDN's Patty Wolfe sat down with Code of Honor's trainer, Shug McGaughey, to talk about the trend, and the upcoming race.

TDN: From the beginning, you have run this horse on the dirt. Why?

SM: He always trained well on it. When I got him from Ocala as a 2-year-old, he went to Fair Hill. He trained well on the dirt and I never had him on the turf. I brought him to Saratoga to get him ready to run and it was the same thing. He trained fine on the dirt. I hope he doesn't force me to try him on the turf. With him being by Noble Mission, it's always an option, but I hope it's one we don't have to use anytime soon.

TDN: It's an interesting year for Derby-trail horses by sires you would expect to produce turf runners.

SM: I think that there's just so much turf influence now that we're seeing that, but it's also reverting back to the grass as well. I've had some that I started out on the grass, and then ended up taking them to the dirt and they were really better on the dirt, broke their maidens in one race on the dirt, where they hadn't on the turf, but by turf sires. But there are so many horses now that have come to the United States or have European-type pedigrees, that we all think are turf that might not altogether be turf. So I'm hoping that with Code of Honor, by Noble Mission, the distance factor works, but the turf factor doesn't.

TDN: Any similarities between him and War of Will?

SM: Well, I think that has been a surprise, too. Most of the War Fronts have been better on the turf, and they tried him on the turf the first few times he ran, and then I think they ran him at Churchill on the dirt and it worked and they kept going with it. So maybe Code of Honor will be the same situation, without ever having to run on the turf. It's surprising that War of Will has done as well as he has on the dirt, being by War Front, who's basically been a turf sire. But, War Front was a dirt horse and I don't know that he ever ran on the turf. I trained War Front's mother, Starry Dreamer, and she did run long, but on the turf. And with Code of Honor being by Noble Mission, maybe he would have been a good dirt horse. Who knows? He raced in Europe. He ran a long way on the turf over there. Frankel, as good as he was, he might have run over anything. So those are things that we really don't know when we come back with that influence. But Code of Honor, right from the get-go, showed an affinity for the dirt, and Noble Mission has gotten off to a really great start here and in Europe, and looks like he's got a good future as a sire.

TDN: What's Code of Honor like to be around?

SM: He's gotten to the point where, once I started training him a little harder, he's gotten a little more aggressive around the stall and the barn. He's an easy horse to train, pretty push button. He does pretty much what you want him to do. Looks-wise, he's never been a big-bodied stature type of a horse, but he's very efficient in what he does, so I think that he sort of makes up for maybe his lack of size and stature in his efficiency. And he's always been really sound, where I can really kind of train him a little bit harder and see if he'd take it or not. You know, it's something you're going to have to do to get to races like the Fountain of Youth and hopefully down the line.

TDN: After the Champagne, you took him to the Breeders' Cup. What happened?

SM: Going to the Breeders' Cup, he did everything great. We were really excited to get him there, but from the day we got him there he started coughing. I think I was a sort of `hoping against hope' to get him there and then on Friday morning of his race, he had a temperature of 103 and some change, so that took care of that.

TDN: He was fourth last out in the Mucho Macho Man S. Any thoughts on that race?

SM: I just don't think I'd done enough with him. I don't know whether having that little bit of a temperature and going through the weather in New York and coming down here had anything to do with it. He seemed to be fine. He had worked fine up there, but I just basically don't think I had done enough with him to go one mile, around one turn here. He went into the second quarter, which was a pretty fast quarter, and the track was tiring and I just don't think he was up to it.

TDN: What are your expectations for the Fountain of Youth?

SM: Well, I wouldn't be running him if I didn't think he was going to run well. I like the post. We got the one post. There's some speed in the race. I think we can break. They break pretty close to the turn, so we can save some ground going around the first turn. Let the race develop in front of him. I think he'd probably be sitting in the middle somewhere. I hope that they go in a hurry and he can make his run.

But I want him to do what he wants to do, and I think what he wants to do is to finish and not be up there sort of contesting the pace, and take it from there. I'm in it to win. If he doesn't win, but makes a really good showing, we can go on in a different capacity, whether it be the [GI] Florida Derby or the [GII] Wood [Memorial S.] or the [GII Toyota] Bluegrass [S.] or what. But if he runs disappointing, we'll back off of him and see where he takes us from there. But I do know he's a horse with ability.