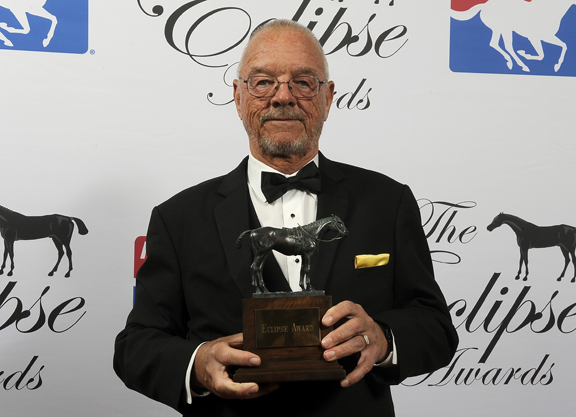 Reigning champ Ray Arsenault try to become the first two-time winner of the NTRA National Horseplayers Championship (NHC) this weekend. Arsenault, who started playing handicapping tournaments in 2003 at Woodbine, was the convincing winner of last year's NHC, amassing a score of $407.70 over the three-day tournament from 53 mythical $2 win and place bets. After a slow start the first day, he took the lead by winning the day two competition with four double-digit winners, including one that returned $100 (worth the maximum $64 for contest scoring), entering the Final Table as the leader and widening his advantage. Finishing second at $361.10 out of the record 654 entries was 2003 NHC winner Steve Wolfson Jr., who posted the best finish ever for a former champion. The 65-year-old Arsenault, who is a transportation broker for freight shipping between Canada and the U.S., is from Thornhill, Ontario, near Toronto, and lives in Fort Lauderdale during the winter.

Arsenault talked with NHC publicist Jennie Rees as he was preparing to start studying Friday's races.

JR: How has winning the NHC changed things for you?

RA: My day-to-day routine and what I do has stayed the same. Money has never really affected me. I was lucky enough to hook up with my buddies Lorne Weiss and (fellow NHC qualifier) Allan Schaffer to work with Frank Stronach on a few things this year. One of them was the Pegasus World Cup Betting Championship. I said, “You have the biggest horse race anywhere now, $16-million race. Why don't you have the biggest contest?” Frank liked the idea. We brought in another fellow, Ross Gallo, after we had a couple of meetings with Frank. Ross actually had the idea years ago to have a contest that the players didn't fund the prize money. We wanted it funded by the track. Frank agreed with that. So everybody put up their money ($12,000 buy-in) and they played with it. There was no takeout to go toward the ($300,000) prize pool; he put it all up. Most places, you put up the bankroll and they take 25 percent or a third and put it into the prize pool.

JR: When did you meet with Frank Stronach?

RA: Last March. Lorne and Allan went out to Santa Anita to play in the contest out there where they had people playing at Santa Anita and Gulfstream. While they were there they saw Frank, because his horse Shaman Ghost (Ghostzapper) was running [in the GI Santa Anita H.], and talked to him. Lorne's family has been really close with Frank and his family over the years. The horse won and he asked Lorne if he wanted to fly back with him and Tim Ritvo on his private jet. Lorne said, “Sure, why not?” They talked about horse racing and how to better the game. Lorne said to Frank, “I know Ray Arsenault well. He just won the Handicapper of the Year. Maybe it would be good to use him to promote the game.” That's how they set up the meeting. And that's how the contest came about.

JR: Paul Matties (2016 winner) has said winning the NHC is beyond what you can imagine and makes you feel a responsibility to be an ambassador for the sport. Have you had the same sense?

RA: Yeah, the winning was surreal, unbelievable. The whole year, it's been great. I've met a lot of new people–that's my favorite part of the game. And I was able to mentor a few people through the NTRA. They came up with a mentor program. So in a way I helped some newbies into the game, the contest game. That was good.

JR: How has the NHC and awarding an Eclipse Award for Handicapper of the Year changed things for the horseplayer?

RA: Oh, it's big. I think it's opened the sport up for us. Years ago they had contests, but they were low-key. I never really heard much about them. Then when they started the NHC (2000), it's growing leaps and bounds since then. The Eclipse Award is a great feeling. It was amazing to get up and talk in front of everybody. And to wear a tuxedo!

JR: When you were mentoring new players, do you have some quick-hits advice?

RA: My main thing is first time new surface or change: the horse has been running with everything the same and now they put blinkers on or geld him, dirt to turf or turf to dirt or stretching out. Surface change is the big one, I find.

JR: Is your philosophy different if you go to the track for a regular day versus playing in a contest?

RA: I probably bet the same way as I play in a contest. I won't bet a favorite out of my own pocket. Most contests I won't bet a favorite, unless it's a mandatory where I think he can't lose. But I'm always trying to beat the favorite. So I don't have a lot of winning days, but when I do, I do well.

I probably don't bet a horse out of my pocket unless he's 4-1, 5-1 or higher. I say to myself somedays that I wish I bet the favorites. In the Pegasus contest I could have done real well if I bet the favorites. Instead I tried to beat them. I put them in exactas and multi-race wagers. But on a win bet, I don't usually bet them.

JR: Knowing how daunting it is to win, how do you feel about your chances to be the first two-time winner?

RA: That would be great. I feel good. I've got to be prepared. That will be the whole key. If I can find time–Vegas is a tough place for me to really concentrate, because I don't sleep a lot there. I do get up and meet my buddy in the sports book around 4 o'clock and we do about four or five hours of studying. You can't walk in there and expect to do well without doing your homework. Unless you're very lucky.

People are so good, and they have so much (information) at their fingertips now. The stats, you used to have what the Racing Form gave you. Now you go online and you can pull up trainer stats with certain age horses, fillies or colts. It's mind-boggling. I'm too old for that, but a lot of guys do that and are very successful. There are so many good players out there.