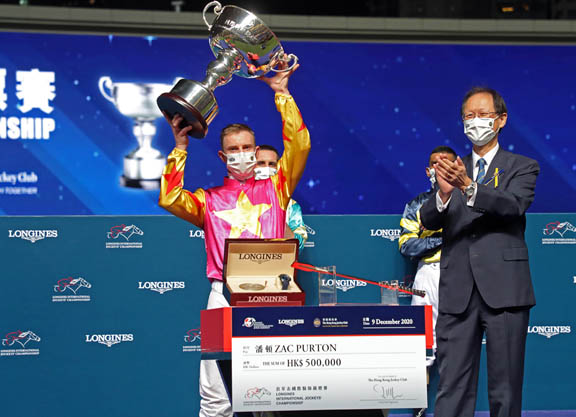 For the second time in four years, Zac Purton, Hong Kong's leading jockey in each of the last three seasons, hoisted the trophy following the Longines International Jockeys' Championship held Wednesday evening at Happy Valley Racecourse. But a fair bit of the spotlight shone upon Hollie Doyle, who capped a fairytale season with a victory in the fourth and final leg of the series, good for a share of third place in the competition.

The 24-year-old, who along with her partner Tom Marquand was part of a six-strong European contingent, was allotted the most promising of the night's 48 runners when barriers were assigned Monday morning and she made no mistakes aboard the David Hayes-trained Harmony N Blessed (Aus) (Magnus {Aus}), racing just outside the leader before pouncing for a 3/4-length victory as the $21 (11-10) favourite (video). In addition to her share of the HK$1.026-million prize money to the winner, Doyle also split HK$100,000 with co third-place getter Alexis Badel, who threw Gallant Crown (Aus) (Hallowed Crown {Aus}) across the line first in the second leg of the IJC (video).

“It's absolutely unbelievable,” said Doyle, whose 116 victories this season established a new record among female riders for a British Flat season.  “I knew I had a good chance on this horse, but you need a lot of things to go right. Just a huge privilege for Tom and I to have been asked and after a great season, it's icing on the cake.”

Purton has finished ahead of Joao Moreira in the jockeys' premiership the last three seasons, but the Brazilian landed the first blow when Gouten of Garo (NZ) (Per Incanto)–one of three winners on the evening for his sire–caused a front-running upset at 14-1 in the opening race of the contest (video). Badel leveled the score with his late surge in race five with Purton picking up six points for second, but the Australian ex-pat drew even with Moreira in the penultimate leg, outfinishing the 'Magic Man' aboard 4-1 Gift of Lifeline (Aus) (Pierro {Aus}) (video). Four winning chances remained among the riders entering the last of the four races, but Purton sealed the deal with a dead-heat for third astride Flying Bonus (Aus) (Snitzel {Aus}), just edging Moreira by a count of 20-18. Purton trails Moreira by about 20 winners in the current season.

Purton, who became just the fourth jockey to reach 1200 winners in Hong Kong earlier on the program, also won the IJC in 2017.

Extra prize money was on offer for the trainer who racked up the most points, and–having saddled Gallant Crown and Gift of Lifeline–a check for HK$200,000 was awarded to Tony Millard. It was the first winner for the Purton/Millard partnership since March 2015, according to Hong Kong racing expert Alan Aitken.

A new system, intended to distribute the IJC rides more evenly, seemed to have worked, as 10 of the 12 jockeys in the competition earned at least one top-three finish.

“There have been a lot of good story lines out of tonight and I think the new system gave a lot of jockeys in the room a bit of confidence,” Purton said. “I could feel the enthusiasm in the room and everyone was keen to go out there and give themselves a chance.

“Hollie winning a race was another highlight and Tony winning the trainers' bonus and me being able to seal it for him. Hopefully we broke ice there and we can put our long run of outs behind us and just get on with business.”