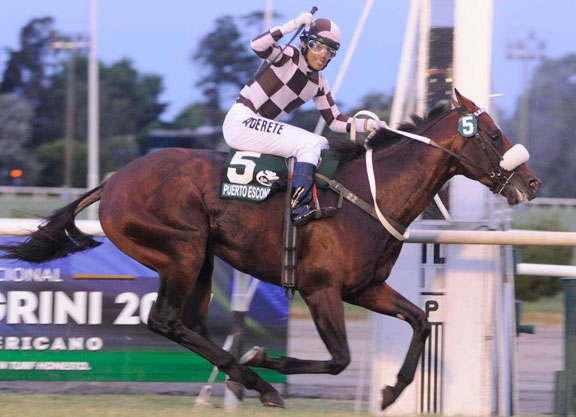 Sent off as the fans’ choice in the field of 13, including seven winners at the highest level, Puerto Escondido filtered his way to the front while racing nearest the fence to pull away clear with 1000 meters remaining en route to a four-length rout under a masterful ride from jockey Osvaldo Alderete.

The win capped off a glorious season for the Pablo Sahagian pupil who broke his maiden late in his 3-year-old season when capturing the G1 Gran Premio Miguel A. Martinez de Hoz in April before scoring in the G3 Clasico Progreso and later posting a six-length romp in the G1 Gran Premio Copa de Oro over the Pellegrini course and distance in October.

“I just told the rider to ride his race,” said an ecstatic trainer Pablo Sahagian, who celebrated his first Pellegrini triumph.

“I knew I had a good horse and a very good chance to win the race,” said jockey Osvaldo Alderete who rewarded the connections confidence with an impeccable ride.

Sixties Song, hero in March of the G1 Gran Premio Latinoamericano in Chile, faltered in the stretch after being in contention early to finish next to last.