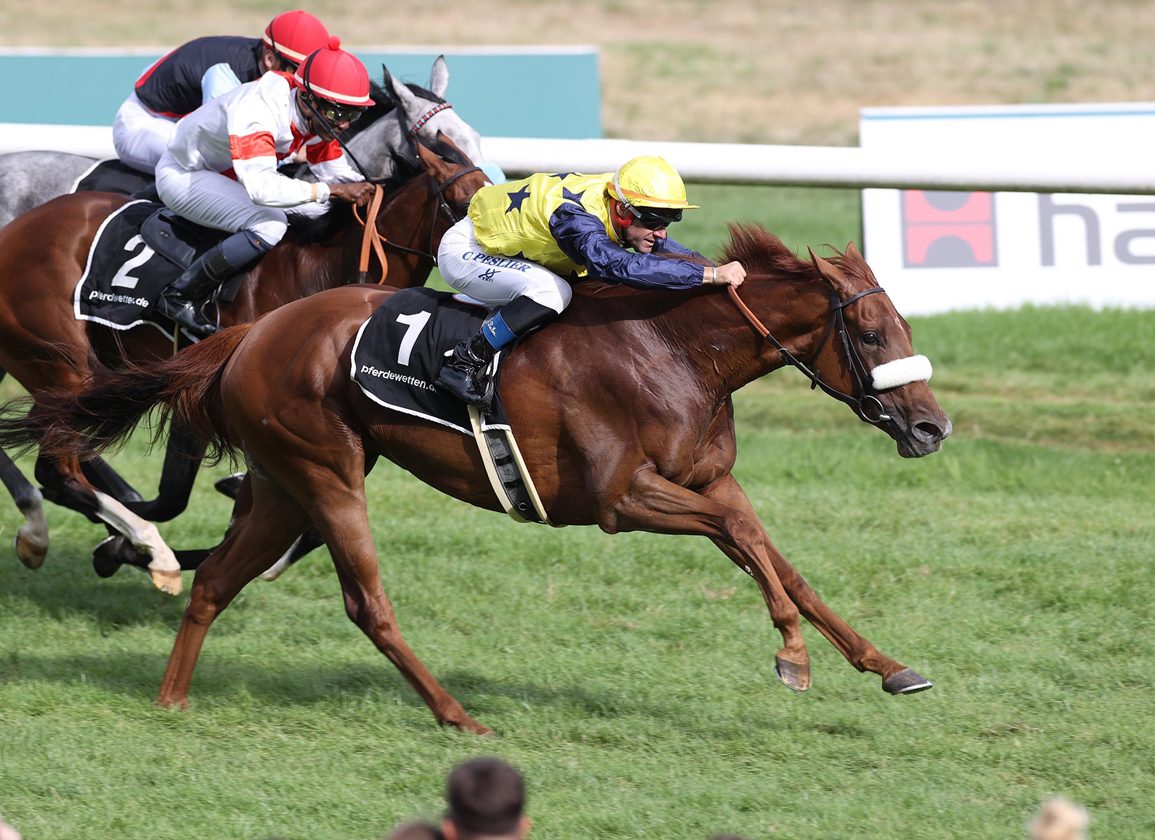 “To finish first and second is a dream result,” trainer Waldemar Hickst to GaloppOnline. “I actually had more of a gut feeling for India because she had improved from race to race, but it was a great ride from Olivier Peslier and I'm extremely satisfied. I was concerned about the distance and the [good-to-] soft ground, but she had no problems with it. Amazing Grace could now head to Canada for the [GI] E. P. Taylor S., while India has an entry for a Group race in Paris on Arc Day.” The winning owner's racing manager Ronald Rauscher added, “We hoped Amazing Grace would be competitive, but the pace wasn't excessively high. She won very convincingly and we now have the E. P. Taylor S. in the back of our minds. Another possibility is the [G1] Preis von Europa in Cologne.”

Amazing Grace is one of two black-type and two group winners for her G1 Melbourne Cup-winning sire. Out of a German listed winning-daughter of Danehill Dancer (Ire), Amazing Grace is one of two winners from three to race for her dam. Amabelle has the unraced juvenile full-brother to the winner in Astaire (Ire), a yearling filly by Gleneagles (Ire) and a foal of this year, once again by Protectionist.

Antonym (Bahri), the second dam of Amazing Grace, also struck at listed level in Germany, while she, in turn, is out of the dual French Group 2 winner Annaba (Ire) (In The Wings {GB}). This is the extended family of G3 Park Hill S. heroine Anna Of Saxony (GB) (Ela-Mana-Mou {Ire}), as well as of Accessories (GB) (Singspiel {Ire}), the dam of a quartet of group winners led by Group 1 winners and sires Epaulette (Aus) (Commands {Aus}) and Helmet (Aus) (Exceed And Excel {Aus}).