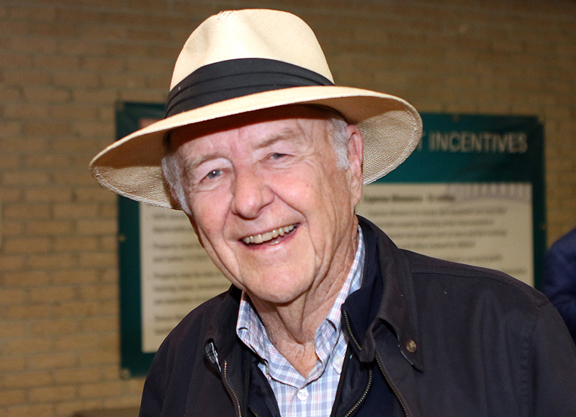 Jon S. Kelly, a successful California businessman who maintained Thoroughbred racing operations all over the world, passed away Saturday morning at his home in Tres Palomas in Rancho Santa Fe. He celebrated his 84th birthday July 24 and passed away following a lengthy battle with cancer. Kelly had been in hospice care and several family members, including his wife, Sarah, were at his side at the time of his death.

A horse owner since the 1960s, Kelly has raced horses in England, Ireland and Australia in addition to the U.S. He most notably raced MGISW Borrego (El Prado {Ire}) with trainer Beau Greely and also had horses with Bob Baffert, Richard Mandella and Christophe Clement. Gingham (Quality Road), a horse raced by Sarah Kelly and Jane Wiltz, won the Angels Flight S. just last month at Santa Anita for Baffert. Kelly and his wife also campaigned Red Vine (Candy Ride {Arg}), a stakes winner and runner-up in the GI Breeders' Cup Dirt Mile and GI Cigar Mile H., with Clement.

“He was quite a guy,” said Dr. Greg Ferraro, chairman of the California Horse Racing Board and a longtime Kelly friend. “He could make anyone laugh. He always lifted your spirits.”

Ferraro told of business associates Kelly had worked with 30 and 40 years ago writing him letters recently sending thanks for his council and guidance and how it had shaped their careers and lives. He spoke personally of Kelly sending him to a Louisville hospital for a life-saving operation, then make a huge donation to the hospital in Ferraro's name.

“He didn't make it in his name, which he should have,” said Ferraro, “but that was John. He did so many good things for so many people and he never bragged or looked for credit. He just was a good person who did good things. He was special.”

Kelly is survived by his wife and six children, as well as many grandchildren.

Those wishing to make a donation in his name are encouraged to do so at two of his favorite projects–the Center for Equine Health at the UC Davis School for Veterinary Medicine or the Gregson Foundation, which services backstretch workers and their families.

At his request, there will be no services.