Progeny of American-Sourced Mares Set to Shine at Gold Coast 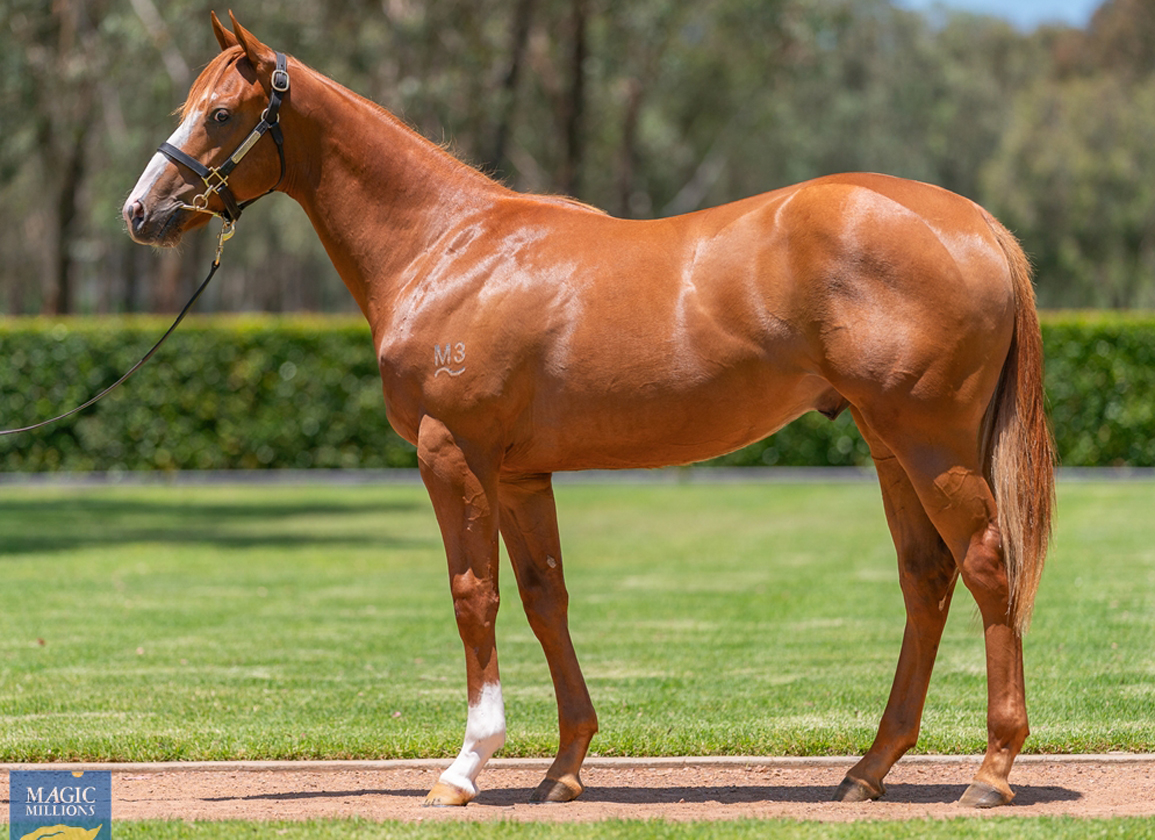 The Magic Millions Gold Coast Sale, one of Australia's two premier yearling sales, was to kick off Tuesday (Australian time) in Queensland, with the cream of the crop of those foals born in 2020. Buyers will relish the opportunity to get not only into some of Australia's pre-eminent female families, but also into some American bloodlines that have been sourced by a variety of bloodstock professionals at auction houses in this country. In today's TDN, we look at horses selling in the first two sessions. Horses being offered Thursday and Friday will appear in Thursday's TDN.

The sixth foal for Canada's Champion 3-year-old filly, who captured the 2011 Queen's Plate S. as well as the Woodbine Oaks three weeks earlier, has the benefit of a Triple Crown winner on the top of his pedigree as well as bearing a striking resemblance to him. From Justify's first Southern Hemisphere crop, the chestnut is a half to graded stakes-placed Miss Canada (Aus) (Exceed and Excel {Aus}) as well as two other winners. The Ontario-bred Inglorious was a $1.35 million purchase from the 2013 Fasig-Tipton November sale by Kia Ora Stud, and her offspring have been well-received among buyers in her adoptive country: her first foal England (Aus) (Fastnet Rock {Aus}) sold for over US$680,000 as an Inglis Easter yearling in 2017. The full-sibling to that one, Off Width (Aus), hammered for over $400,000 at the same sale a year later, and Miss Canada recently passed through the 2021 Magic Millions Broodmare sale, dropping the hammer for over $580,000 the way of Suman Hedge Bloodstock.

The flashy seventh foal from GISW Miss Match with go through the ring as a half-brother to three winners from three to race, including Bandol (Aus) (Snitzel {Aus}), who also has a colt by Shalaa entered in the sale. The half-sister sold for over $500,000 in 2017 at the Inglis Easter Yearling sale. The dam is a half to 'TDN Rising Star' and GI Acorn S.-winning Carina Mia (Malibu Moon) and to a Group 1 stakes producer in Argentina. This is the female family of the late Lord Nelson. Miss Match was purchased by Freyer Bloodstock for $500,000 at the 2010 Keeneland November sale and was exported to Australia in 2012.

Olympic Medal was consigned as a weanling by Hill n' Dale back in 2016 at the Keeneland November sale, going the way of Julian Blaxland's Blue Sky Bloodstock/Aquis Farm for $525,000 and she was immediately exported to Australia. A half to GSW Heavenly Curlin (Curlin), the young broodmare hails from the family of Champion Australian miler turned champion sire, Redoute's Choice (Aus) (Danehill), former 'TDN Rising Star' and sire Rubick (Aus) (Encosta de Lago {Aus}) and G1SWs Platinum Scissors (Aus) (Danehill) and Manhattan Rain (Aus) (Encosta de Lago {Aus}). This colt is from the first crop of his sire, a stakes winner and Group 3-placed at home and later winner in Australia of the G1 Manikato S. and G1 Futurity S. in Melbourne.