Prime Factor Puts Two Hearts Farm Back in the Spotlight 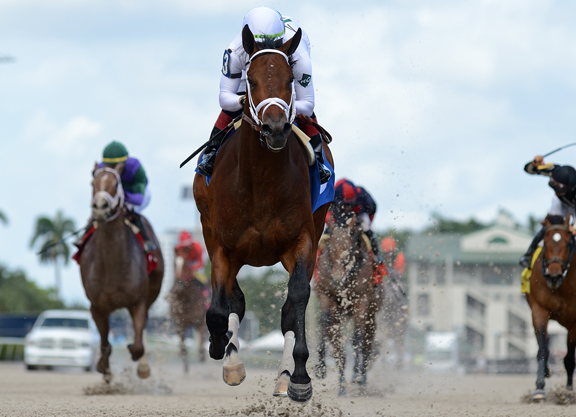 Tony Braddock's Two Hearts Farm made quite a few headlines back in 2015 when their mare Fioretti (Bernardini) marked herself as a Breeders' Cup contender with wins in the Roxelana S. and GII TCA S. With that mare now retired to the Two Hearts Farm broodmare band, talented sophomore Prime Factor (Quality Road) has put his breeder back in the spotlight and looks to add another feather to Braddock's cap Saturday in the GII Fountain of Youth S.

Braddock was interested in horses and racing from a young age, attending fairs near his home in North Bergen, New Jersey, to learn more about the various equine breeds. He later moved to Virginia after retiring from the Army and decided to become part of the racing industry he had long admired.

“I got into the business in 1974 and that is when I met the Hamiltons here in Virginia,” Braddock said. “I resigned from the Army and got into businesses in Northern Virginia. I got involved with horses in Middleburg [Virginia] and began breeding.”

Braddock eventually decided he wanted to expand his operation and purchased a farm in Paris, Kentucky, in partnership with Joe Hamilton, whose son Anthony trained Fioretti.

“The people who owned the better stallions in Virginia passed away and all the big stallions were in Kentucky, so my plan was to move whatever I had at the time to Kentucky,” Braddock said. “I wanted to start at a higher level, so I sold some stock and I bought 50 acres in Paris.”

He continued, “Joe Hamilton passed away in 2015 and now I am the sole owner. I have about 15 mares and keep one or two foals to race. I have three right now in Florida being trained. One is half-brother to Prime Factor by Liam's Map, who I am told is a good horse.”

Prime Factor was the third foal Haylie Brae produced for Braddock and he proved to be special pretty early on.

“Several bloodstock agents come to the farm and look at my current yearlings [leading up to the sales],” Braddock said. “With this colt, when he was weaned, people began to take real notice of him and make some comments about his conformation and how he was growing. He even caught the eye of my blacksmith. He said, 'You've got a good one here. This guy is a seven-figure horse.'”

Braddock's blacksmith wasn't too far off. Prime Factor summoned $900,000 from the powerhouse partnership of WinStar Farm and China Horse Club, who also campaigned Triple Crown hero Justify, at the Keeneland September Sale. It was the breeder's biggest sale to date.

Romping by 8 3/4 lengths in his career bow going six furlongs at Gulfstream Dec. 12, the bay was tabbed a 'TDN Rising Star' for that impressive effort and completed the trifecta next out when trying two turns in that venue's GIII Holy Bull S. Jan. 30.

“It is very exciting,” Braddock said about breeding a colt on the GI Kentucky Derby trail. “He is already graded stakes-placed and I will certainly be watching and cheering him on Saturday.”

Between Prime Factor's potential, his juvenile half-brother Sea Lane (Liam's Map) in training and his yearling half-brother by Distorted Humor pointed to a yearling sale, Braddock has plenty to look forward to in 2021.