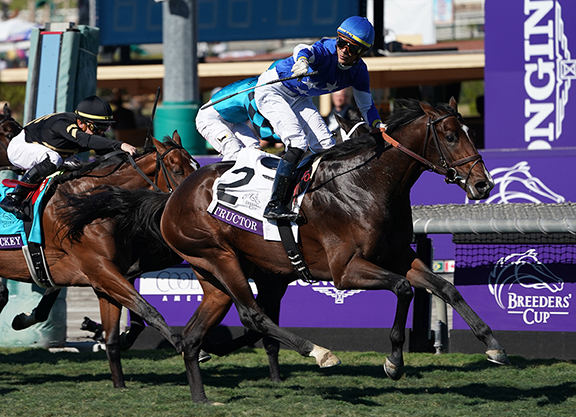 ARCADIA, CA – Structor (Palace Malice), off as the 5-1 third-choice, stayed out of trouble and came rolling late between horses to remain unbeaten in a roughly run renewal of Friday's GI Breeders' Cup Juvenile Turf at Santa Anita. It was 3/4 of a length back to 55-1 longshot Billy Batts (City Zip) in second. Another mega-bomb Gear Jockey (Twirling Candy) was third at 67-1.

It was the first win-hard to believe, isn't it?–in the race for leading trainer Chad Brown, who has quickly racked up five victories in the filly equivalent.

The last out GIII Pilgrim S. winner broke on top from his inside draw and saved ground in a mid-pack sixth through fractions of :23.14 and :47.55. Looking for room at the top of the stretch beneath Jose Ortiz, he began to quicken shortly thereafter from in between horses as the pacesetting Graceful Kitten (Kitten's Joy) bounced off the rail and dropped back sharply. Structor emerged from all the chaos out into the clear and kicked home smartly to get the money.

“He's just improving so much every week, this horse,” Brown said. “We've always thought a lot of him and he's come in here and has been improving week to week. His last race was very impressive to me. We thought he was sitting on another good race. My staff did a great job bringing this horse along. I'm going to try this horse on dirt at some point. He trains very well on it. He deserves it and he's got the right running style to potentially run on both surfaces. He's a class horse. Jose did a terrific job.”

Ortiz added, “He had some traffic, but good horses overcome it, and he did it.”

Hit the Road (More Than Ready), seventh across the wire, was disqualified and placed last of 14 for causing interference in the stretch.

Prior to his hard-fought head success in the Pilgrim at Belmont Sept. 28, Structor won first out going two turns over the Saratoga lawn Aug. 31.

Co-owners Jeff Drown and Don Rachel of Minnesota are longtime friends in the construction business.

Structor becomes the first Grade I winner for freshman sire Palace Malice. He was the most expensive of 36 juveniles sold by the GI Belmont S. winner in 2019 when bringing $850,000 from bloodstock agent Mike Ryan on behalf of Drown and Rachel at OBS March (:21 1/5). Structor is the first foal out of the winning mare Miss Always Ready, a full-sister to 2010 GII Breeders' Cup Juvenile Fillies Turf heroine More Than Real (More Than Ready). Miss Always Ready, a $400,000 KEEAPR 2-year-old purchase by Three Chimneys Farm in 2014, is also responsible for a Malibu Moon filly of 2018 and a Palace Malice filly of this year. She was bred to Gun Runner and Will Take Charge for the 2020 season.