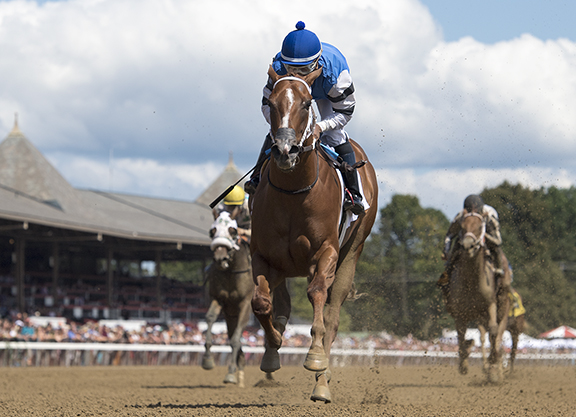 Wicked Whisper (Liam’s Map), the priciest of 64 yearlings by her first-crop sire (by Unbridled’s Song) to sell last year when she cost $500,000 at Keeneland September, began repaying owners Alex and JoAnn Lieblong Sunday at the Spa when she put forth a head-turning debut effort worthy of ‘TDN Rising Star’ status. Having done most of her racetrack preparation down in Kentucky, the Steve Asmussen pupil shipped up to Saratoga to work an easy half-mile over the Oklahoma Training Track in :50 flat (25/48) Aug. 19 and was backed down to 8-5 favoritism facing a well-bred group.

Not off particularly quickly from her rail draw, the chestnut was pushed along by Ricardo Santana, Jr. to rush up and grab the early lead. She doled out splits of :22.41 and :45.64 while always several lengths clear, and hit the lane looking like a sure thing. From there she continued to cruise away under confident handling, and ran up the score to 6 1/4 effortless lengths over the seemingly turf bred Highland Glory (Sky Mesa). Second choice Stop Shopping Tammy (Tapit–Miss Shop) had trouble at the break and checked in fourth.

Wicked Whisper becomes the second winner for Liam’s Map and seventh maiden-breaking juvenile for the Asmussen barn this Saratoga season. The somewhat late-blooming Liam’s Map was second on debut here as a sophomore in August of 2014, and returned to the Spa the following season to finish second in the GI Whitney S. before romping in the GI Woodward S.

Wicked Whisper’s dam Zayanna (Bernardini) is already responsible for Point of Honor (Curlin), GSW & MGISP, $466,375–second in the GI Alabama S. here Aug. 17, the stakes-winning juvenile Velvet Mood (Lonhro {Aus}) and stakes-placed Admiral Jimmy (Jimmy Creed), who broke the 4 1/2-furlong track record at Gulfstream for a winning debut at two in 2017. Zayanna is a half to graded winners Capitano (Belong to Me), Mr Freeze (To Honor and Serve), Dilemma (Grand Slam) and Heavenly Ransom (Red Ransom). She produced a Union Rags filly last term and a Curlin colt Apr. 26.