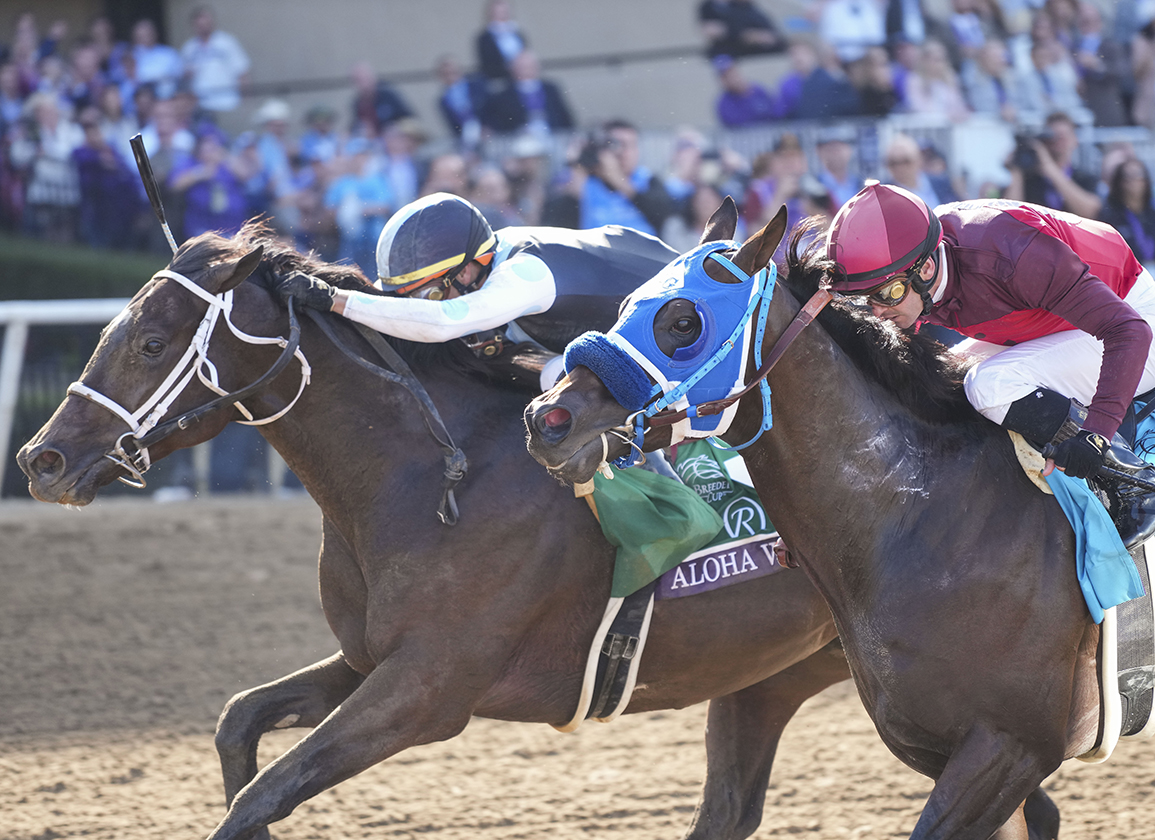 Hard to put a price on a stallion like this. Apart from anything else, he is the parting legacy of Danzig–conceived when the great patriarch was 26–and his maternal line brings a daughter of the wartime foal My Babu (Fr) as close up as third dam. True to that venerable seeding, his stock has emulated both the class and constitution that sustained his own speed–carrying commitment on the racetrack. Though his career was compressed into barely a year, he didn't just “dance every dance,” but turned the pages for the orchestra as well. And while he dropped back to seven furlongs for his Grade I, in the King's Bishop, he had held out for second in the GI Kentucky Derby after setting a pace that summoned the winner and third from as far back as 17th and 14th at the third split.

He has just sired his 12th domestic Grade I winner, to add to three in Australia, and looks booked for the top 10 in the general sires' list for the third year running. He finished fourth in 2019, ninth last year and stands eighth this time round. To take an incontrovertibly high-class stallion as benchmark, Uncle Mo was 13th in 2019, fourth last year and-basking in the brilliance of his 10th Grade I winner, Golden Pal–lies 10th as we turn for home in 2021. Uncle Mo duly stood at $175,000 this year, and will trade at $160,000 next spring.

Is there better proven value anywhere in Kentucky? Okay, so the late bloom of his GI Breeders' Cup Sprint winner Aloha West (unraced until four) confirms that the Jonabell stallion's foals won't always offer what is perceived as “commercial” precocity. But such brilliant acceleration in a dirt dash round a track as dizzy as Del Mar confirms that Hard Spun can get you any kind.

To take a brisk sample: Hard Spun's first crop, which ultimately yielded a record 17 stakes winners, had by midsummer featured a Group 2 juvenile winner in Britain. His biggest earner is a turf sprinter in Australia; he has had a Group 2 winner on the downhill five at Goodwood; and also a GI Arlington Million winner on the grass. At the same time, he has had pour-it-on dirt runners round two turns, like Questing (GB) and Smooth Roller (another who only surfaced at four, but explosively). Spun To Run won his GI Breeders' Cup Dirt Mile from the front, Hard Not To Love cut them down from the rear in the GI La Brea S. But their sire has also had a dual winner of the GII Marathon, briefly a Breeders' Cup race, at 13 and 14 furlongs.

The one thing he hasn't yet managed, unlike another of Danzig's later sons in War Front, is to secure his own branch of the dynasty. Several of his best performers have been fillies and geldings. Spun to Run drew a solid first book of 119 at Gainesway, however; and Silver State, as a GI Met Mile winner, goes to a farm of corresponding resonance in Claiborne-once, of course, home to Danzig himself. Now Aloha West has emerged from nowhere as another feasible heir, so let's take a quick look at his antecedents.

Aloha West was bred in Maryland by Robert T. Manfuso and Katharine M. Voss from the graded stakes-winning sprinter Island Bound (Speightstown). Expectations for the mare appear to have slightly downgraded of late: having been afforded several chances with Kentucky stallions, she has made down with $5,000 covers in Maryland the last couple of years. But her sights may need to be raised again now, as she has transformed her record in 2021. At the start of the year, her sophomore daughter by Nyquist and 4-year-old son by Hard Spun both remained unraced. But Moquist is now unbeaten in four starts for trainer Dale Capuano, the latest a Laurel optional claimer just a week before the Breeders' Cup; and Aloha West, of course, has been thriving for Wayne Catalano since the summer, winning twice at Saratoga before an unlucky defeat when tried in a Grade II at Keeneland. That emboldened a tilt at the big one at Del Mar, and spectacular vindication for local resident Aron Wellman of Eclipse Thoroughbred Partners, who had moved to buy the horse privately after he showed promise (won on debut, messy start next time) in a belated start to his career for Gary and Mary West at Oaklawn last winter.

Now nobody needs to give the Wests any instruction in the ups and downs of this business. In fact, when they won one of their very first Grade Is, nearly 20 years ago, their second runner in the race collapsed on the track with heatstroke. (Happily, he was okay to fight another day.) That was also the year when they had the favorite break down in Derby week. They've seen it all before, they trade to support their program, and one day everything is going to fall right to redress the disqualification of Maximum Security (New Year's Day). In the meantime, however, you have to hope that they're satisfied with the prices they took for the two 2021 Breeders' Cup winners who left their ownership.

One was the devastating GI Dirt Mile winner Life Is Good (Into Mischief), who made $525,000 as a yearling. His dam is still only eight, so here's a rising tide that floats all boats. (Less happy will be the vendors of the Grade I-placed second dam, at Keeneland November two years ago, for just $15,000–exactly one percent of her cost when carrying her first foal, eight years previously! Purchasers SF Bloodstock clearly realized that her yearling grandson, purchased in the same ring a few weeks previously, was something special.)

Hopefully the Wests also got a fair price for Aloha West back in the spring. Their program is oriented towards the Triple Crown and clearly that moment had passed. Regardless, it turns out that he was yet another typically astute discovery by Ben Glass. The long-serving manager of their operation bought the dam of Life Is Good as a yearling, and picked out Aloha West for $160,000 as Hip 1025 at the Keeneland September Sale.

Aloha West's granddam was a three-time winner with some minor black type, but Island Bound represents the only distinction she had achieved in what proved to be a curtailed breeding career. There is, however, real depth in behind.

The next dam, by Afleet, also showed some talent and soundness (3-for-19) and produced two graded stakes winners (and also a Grade II runner-up) including GI Breeders' Cup Juvenile third Rogue Romance (Smarty Jones). The unraced fourth dam was a Manila half-sister to Ogygian, damsire of Johannesburg; and the next dam is also granddam of a huge modern influence in Fappiano. And, best of all, that means that she in turn is out of the Tartan Farms foundation mare Cequillo (Princequillo).

These aristocratic embers have now been stoked up by Hard Spun, whose own background mirrors the shape of Island Bound's family. Both represent a dashing sire-line, Hard Spun as a son of Danzig; Island Bound as a daughter of Speightstown. And both complement that with sturdy influences seeding the bottom line. We've seen that Island Bound was out of an A.P. Indy mare, for instance, while Hard Spun's second dam was by Roberto-and, moreover, shared a dam with Darby Dan champion Little Current (Sea-Bird {Fr}). This, indeed, becomes a very deep well of aristocratic Darby Dan blood for Hard Spun to draw on: his fourth dam is Banquet Bell (Polynesian), dam of two farm legends (both by Swaps) in Chateaugay and Primonetta.

Even the intervention of the hulking Turkoman, Hard Spun's pedestrian damsire, has not diluted the potency of this blood. Hard Spun's stakes-winning half-sister by Stravinsky has further decorated the family as second dam of multiple Grade I winner Improbable (City Zip).

With these auspicious foundations, Aloha West had the best possible start in life. Bob Manfuso has already bred a top-class runner at Chanceland Farm, which he co-owns with Voss, in Cathryn Sophia (Street Boss), winner of the GI Kentucky Oaks in 2016. And for the sale his breeders had the good sense to send this colt to Nursery Place, a privilege no young horse in the Bluegrass can exceed.

So there have been many different contributors to the flowering of Aloha West-both genetically, and in terms of horsemanship. But he is certainly stamped with the Hard Spun brand, as a horse flourishing with maturity and touched by brilliance.

Just imagine if Hard Spun himself had been permitted to remain in training at four! As it was, his new owner was then investing heavily in a reset of his international stallion program. Of course, Darley is a global program and Hard Spun was sent off to Japan for a year at a critical stage, in 2014. That hiatus, leaving him without U.S. juveniles in 2017/sophomores in 2018, was doubtless what allowed his fee to stabilize at such an accessible level. Remember he was $60,000 before he went to Japan, and $35,000 for his return-even though he had dominated the fourth-crop sires' table in the year of his absence, whether by prizemoney, winners or graded stakes success, finishing ahead of no less a trio than Street Sense (who had accompanied him to Hokkaido), English Channel and Scat Daddy.

I am often rebuked, when lamenting the stampede for rookie sires who will rarely command so high a fee again, that there is no alternative but to roll the dice; that the “proven” sires have all put themselves way out of reach. It's a free world, a free market, and we're all entitled to our opinions. But I would say that here is one stallion that makes that view, well, just a little Hard to understand.