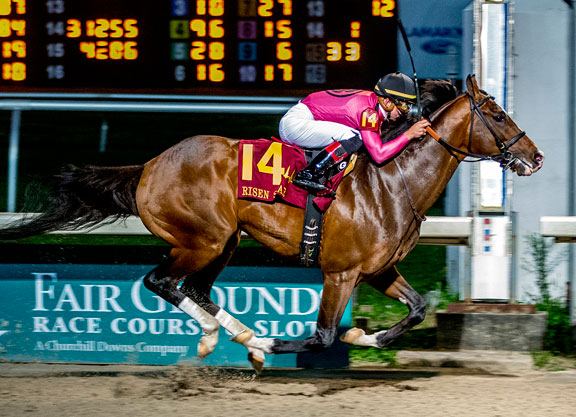 War of Will | Hodges

War of Will (War Front) returned to the track Wednesday at Churchill Downs for the first time since being bumped around and tangling legs with Maximum Security (New Year's Day) in Saturday's GI Kentucky Derby. He crossed the line eighth, but was promoted to seventh after the disqualification of his aforementioned rival.

The flashy bay was scheduled to jog Tuesday, but trainer Mark Casse did away with that plan after he noticed the colt was feeling some discomfort in his right front foot. It was discovered that the shoe had shifted during the race.

“After a day or two, it was starting to bother him,” Casse said. “He was a little uncomfortable [Tuesday] morning. So we pulled his shoe off, soaked his foot, put his shoe back on today. And he was 100% and went out to train today.”

War of Will jogged a mile Wednesday morning and is being pointed to the GI Preakness S. May 18.

“I do a lot of jogging with him anyways,” Casse said. “Obviously, we just missed winning the Preakness two years ago by a head with Classic Empire (Pioneerof the Nile). I never breezed him in between the two races, and I'm not going breeze this one either.”

The conditioner continued, “To me, it's more about getting back your energy level. We don't have to worry about fitness at this point in time. He's not going to do a whole lot of anything. He's going to Baltimore Monday if everything stays like it is today, and everything is perfect and he's happy and his energy level is good. We'll do some blood work on him in a day or two.”

The Bob Baffert-trained Improbable (City Zip), who crossed the line fifth, but was promoted to fourth in the Derby, will return to the track at Churchill Thursday. He will likely ship to Pimlico May 15 for the May 18 Preakness.

“He's walked four days and he'll go back to the track tomorrow,” said Baffert. “I fly back to Louisville Sunday and I'll watch him train Monday. If I'm happy with what I see, then he goes…I don't want to be chasing any ghosts. He's got to be enjoying himself and have that desire.”

Irad Ortiz climbed aboard the 'TDN Rising Star' for the first time in the Derby, but Hall of Famer Mike Smith has the mount for the Preakness. Baffert and Smith won last year's renewal with Triple Crown hero Justify (Scat Daddy).

“The other guys [Ortiz and previous rider Drayden Van Dyke] didn't do anything wrong, but Mike and I have had a little luck together,” Baffert said.

Live Oak Plantation's Win Win Win (Hat Trick {Jpn})–who crossed the line 10th in the Run for the Roses, but was promoted to ninth–may join War of Will in the Preakness. He returned to the track at trainer Mike Trombetta's base at Fair Hill Wednesday morning and his conditioner will make a final decision on the Preakness Friday.

“I have the luxury of being close to home for a change,” he said. “I just want to see the horse train for a couple of days and figure there is no reason to make that decision before I see that. It's only fair to the horse at this point.”

He continued, “Today was his first day back on the track for a light jog. It was fine. Everything seems fine. I just want to observe and make sure that I am completely happy before I go in that direction and make that commitment. It was a hard trip and it was a bit of tough circumstances with the race.”

Also possible for the Triple Crown's middle jewel is GI Florida Derby runner-up Bodexpress (Bodemeister), who finished 14th, but was placed 13th and was one of the horses affected by the incident in the lane. The bay also returned to the track at Churchill Wednesday, jogging two miles accompanied by a pony.

“He was one of the affected ones,” said Gustavo Delgado, Jr., assistant to his father. “We think he could have hit the board if it wasn't for that, the way he was developing. The most important thing is that the horse came back in good shape and is doing well.”

As for when the final decision will be made on the Preakness, Delgado, Jr., said, “I've got to wait for Pops to get here to see his horse. He'll make the decision. But the owners would like to run.”