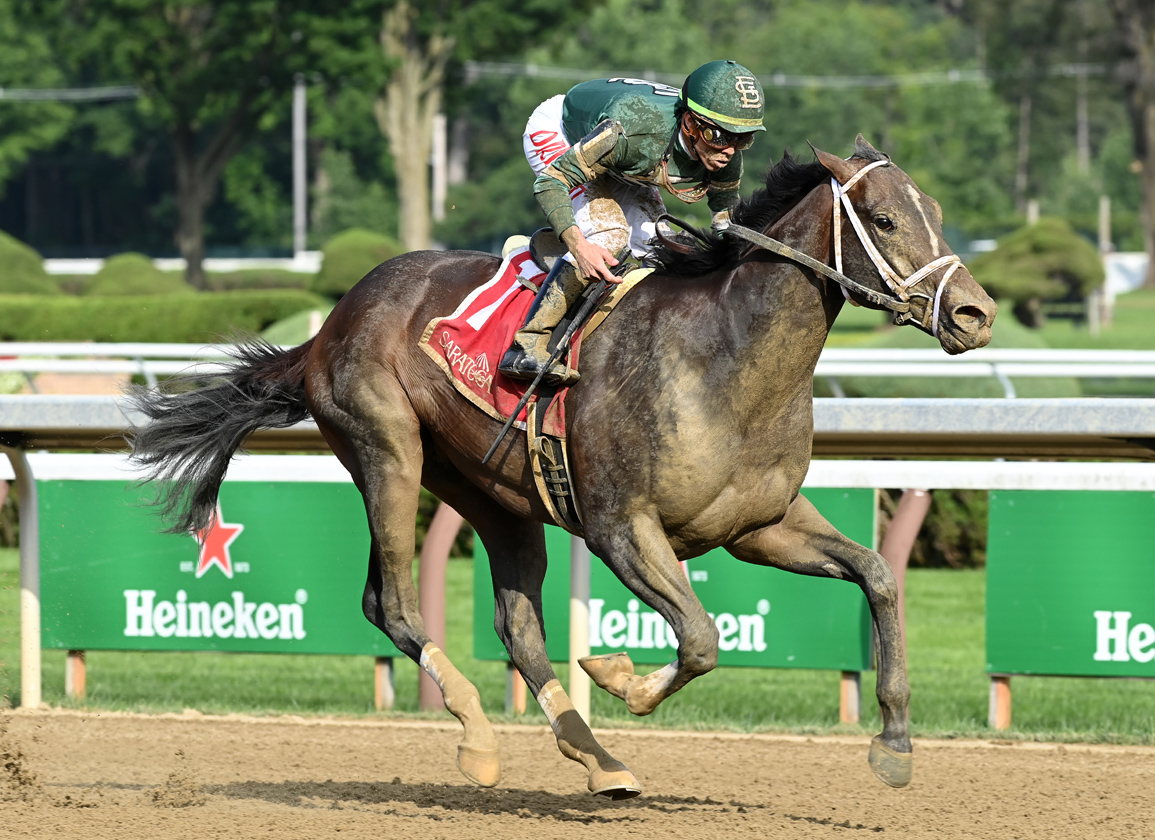 Wit romped home an eight-length winner of the GIII Sanford S. at Saratoga Saturday, becoming the first stakes winner for his highly touted freshman sire (by Into Mischief). The dark bay colt, who broke last before romping home to a six-length 'TDN Rising Star' victory in his 5 1/2-furlong debut  at Belmont June 5, was again away from the gate slowly and settled off the pace as longshot Trust Our Journey (American Pharoah) set the early tempo. The pacesetter was some three lengths in front through a quarter in :22.68 as Wit rated in midpack along the rail. Wit made rapid progress on the bend, rolled up three wide at the top of the lane and surged powerfully to the lead before gliding home an effortless winner.

“He's not a great horse breaking out of there,” admitted winning rider Irad Ortiz, Jr. “I gave him the time to find his stride, and he did. By the half-mile, he started getting into a rhythm and he wanted to improve his position, so I started letting him do it by his own. By the three-eighths pole, I had to call his attention and he responded right away. For a 2-year-old, that was very impressive. He's a nice horse.”

“He broke a little better from the gate today, then Irad hustled him away from there, gathered him up and the horse took him there,” Barry said. “He probably had to move a little earlier than he wanted just to get to that outside position, and then he flew on by from there. He's a very nice horse. I loved what he did.”

Wit is one of four first-crop winners to date for freshman sire Practical Joke, who won the 2016 GI Hopeful S. and 2017 GI H. Allen Jerkens S. over the Saratoga strip.

The unraced Numero d'Oro, not bred in 2019, produced a colt by City of Light this year. The mare, a daughter of stakes winner and multiple graded placed Numero Uno, is a half-sister to the dam of graded winner and multiple Grade I placed Ivy Bell (Archarcharch). She was purchased by breeder Rosilyn Polan for $175,000 while in foal to Frosted at the 2017 Keeneland November sale. The resulting Frosted colt sold to Gatewood Bell's Cromwell Bloodstock for $105,000 at last year's OBS July sale.