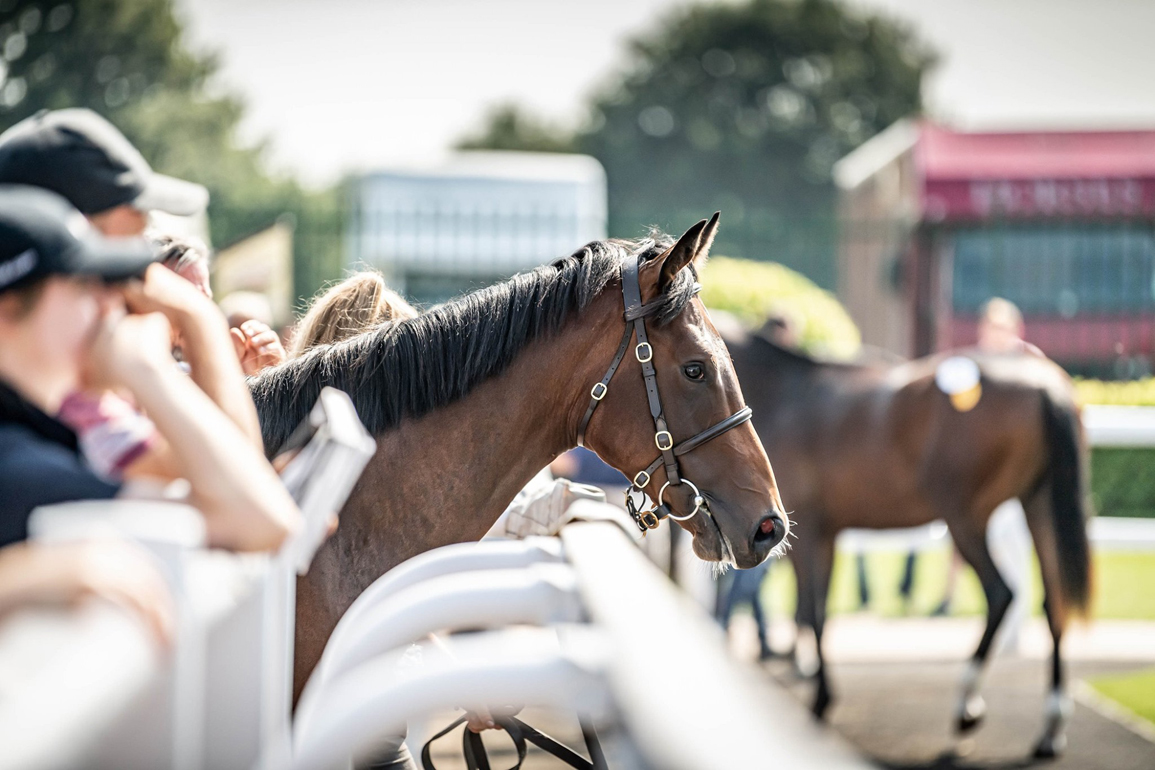 The opening hour of last week's Yorkshire Oaks card was about as good as it gets for a sales firm just days out from its flagship stand. Thirty-five minutes before Goffs UK was firmly in the spotlight with the running of its time-honoured Premier Yearling S., Premier Yearling Sale graduate Zain Claudette (Ire) (No Nay Never) provided a welcome introduction with victory in the G2 Lowther S. Bought for what now feels like a staggering bargain (£20,000) last summer, Zain Claudette has won three of her first four starts including two group races and has compiled earnings of £123,411 for owner Saeed H Al Tayer and trainer Ismail Mohammed.

Michael Owen has been a staunch supporter of the Premier Sale in recent years, and in the aftermath of his syndicate the Dandy Boys winning the Goffs UK Premier Yearling S. with Ever Given, Owen confirmed he would be back shopping this week. And he comes armed with a £34,007 voucher, thanks to the new 'Premier Prizes' incentives attached to the race for the first time this year. The Premier Prizes include a voucher for a 'free horse' for the race's winning owner-a voucher of value equal to the average of the prior year's Premier sale-plus a day of hospitality at York Racecourse, and a free six-month rental of a horse box for the winning trainer, in this case Tom Dascombe.

“When we are talking about ways to improve racing, ultimately it all comes down to owners,” said Goffs UK Managing Director Tim Kent. “The Goffs UK Premier Yearling S. is often targeted by the leading syndicates. Happy Romance won the race last year and the owners of Happy Romance were first-time owners, and it was a great story. So we thought, 'how do we add a bit more to that race to try to incentivize ownership?' We felt this was a way to bring people back in and hopefully help those syndicates. Not only does [the race winner] have a good 2-year-old, they now also have the chance to buy another one for the following year.”

Kent said he hopes the added incentives now attached to the sale race will encourage buyers to have an extra bid or two.

“Hopefully it causes people to think a bit differently,” he said. “The race has been very popular, and some good horses have won it: the likes of Acclamation, Dark Angel and Wootton Bassett are the headline horses for it. Hopefully it has something for everyone and gets people thinking a bit differently.”

The Goffs UK Premier Yearling S., of course, is just one reason for buyers to shop the Goffs UK Premier Yearling Sale: others include the numerous Royal Ascot 2-year-olds, Group 1-winning sprinters and Classic winners, like the six-time Group 1 winner Laurens (Fr) (Siyouni {Fr}), to have emanated from the sale's ranks. This year has proven another very fruitful one for Premier graduates on the track, its star graduates in addition to the aforementioned Zain Claudette including Dream Of Dreams (Ire) (Dream Ahead), the popular winner of the G1 Diamond Jubilee S. after twice finishing second in the race; Happy Romance (Ire) (Dandy Man {Ire}), last year's sale race winner who has won a pair of Group 3 sprints since; Fev Rover (Ire) (Gutaifan {Ire}), last year's G2 Prix du Calvados winner who was third in the G1 1000 Guineas; Mystery Angel (Ire) (Kodi Bear {Ire}), the Listed Pretty Polly S. winner who was second in the G1 Oaks and, like Fev Rover, was bought here by Nick Bradley; and multiple group-winning 3-year-old sprinter and Royal Ascot victor Rohaan (Ire) (Mayson {GB}). Supremacy (Ire) (Mehmas {Ire}) also won last autumn's G1 Middle Park S. From last year's sale, there are currently more than 50 individual 2-year-old winners.

“It's been another good year on the racetrack and that's what this sale is all about,” Kent said. “It's less about the pedigree and more about the type of the horse. Buyers want to get there and see a ready-made racehorse. That's what people expect when they come to us and that's certainly what plays out on the racecourse. We've had a very good year, we've had some good winners and good runners and hopefully there is more of the same to come. People come to Doncaster expecting to see a certain type of horse and we're confident those in are play.”

While, as Kent alluded to, there will be numerous star graduates to come from the sale that may not have lit up the catalogue page, there are nonetheless plenty of pedigrees in the book that fit the advertisement of fast, powerful racehorses. Those include lot 40, a Dark Angel (Ire) half-brother to G2 Coventry S. winner Rajasinghe (Ire) (Choisir {Aus}); lot 57, a Kodiac (GB) half-brother to G3 Superior Mile scorer Balty Boys (Ire) (Cape Cross {Ire}); lot 88, a Hot Streak (Ire) half-sister to champion 3-year-old sprinter Total Gallery (Ire) (Namid {GB}); lot 125, a Showcasing (GB) son of the listed winner Fig Roll (GB) (Bahamian Bounty {GB}), already a stakes producer thanks to the G3 Prix d'Arenberg scorer Al Raya (GB) (Siyouni {Fr}); and lot 291, a full-brother to G2 Duchess of Cambridge and G3 Albany S. winner and G1 Cheveley Park S. second Illuminate (Ire) (Zoffany {Ire}).

Describing the typical Donny yearling, Kent said, “It's going to be a 2-year-old, and it has to have a good walk; that's one thing people really want to see in a Doncaster yearling. It's got to be an athlete and it's got to be ready to go. It's got to show a bit of speed and it's likely to be running over sprint distances as a 2-year-old and may progress up to a mile as a 3-year-old, but really a mile is the maximum capacity for the sort of thing we're selling. They have to have a toughness and determination about them that means you can get the tack on them and get on with them and get running. They're not just whiz-bang 2-year-olds, but they're 2-year-olds that can give you a shot at Ascot and those big 2-year-old meetings and train on. Something like a Guineas horse would be what we'd like to aspire to in the future.”

Premier graduates are going on to success not only on the racecourse, but also in the breeding barn. Acclamation and his son Dark Angel, as well as Wootton Bassett, have been excellent ambassadors for the Goffs UK Premier Yearling Sale as sale race winners that have gone on to success at stud. Those looking to follow in their footsteps include Group 1-winning Premier graduates Advertise (GB), Golden Horde (GB) and Harry Angel (Ire). Champion sprinter Harry Angel, a son of Dark Angel, has five first-crop yearlings catalogued to this year's Premier sale.

“It's great to see them come full circle like that, to see a graduate of the sale's progeny coming through,” Kent said. “We've seen some lovely horses by Harry Angel, I've seen a couple lovely yearlings by him and I know my colleagues have done the same. He's an exciting one; he was a brilliant racehorse. Clive Cox did a wonderful job with him and hopefully he can continue that line going forward.

“If you look at what Acclamation has done, he's been a phenomenal stallion. Dark Angel has re-written the history books in many ways and to be honest, there aren't that many stallions in the world that are hotter than Wootton Bassett after his move from France to Ireland. It gives the whole team an immense amount of personal satisfaction that a horse that won our sales race can go on to win a Group 1 in France and has now been bought by one of the leading stallion operations in the world and has been given the very best chance at stud.”

The European yearling sale caravan rolls into its second sale of the season with vibes positive after the Arqana August Yearling Sale 10 days ago, and Kent's enthusiasm is palpable heading into Goffs UK's headline sale.

“It's the physical that really will get people going when they get here,” he said. “Whatever you see on the page, we think it will be even better in real life, and that's what is exciting us. We've seen videos and photographs of these horses and seen how they've improved since we saw them however many months ago. All of the nominations team have horses they think will top the sale, and we're having a bit of fun between us, telling each other that we're going to do better than our colleagues. It's great that we all have horses we're really excited about. They're a great bunch of physicals and these horses do what it says on the tin. It's athletic racehorses we're looking for and we think we've chosen almost 500 horses that fit that mould over two days and we're excited to show them to purchasers at Doncaster.”