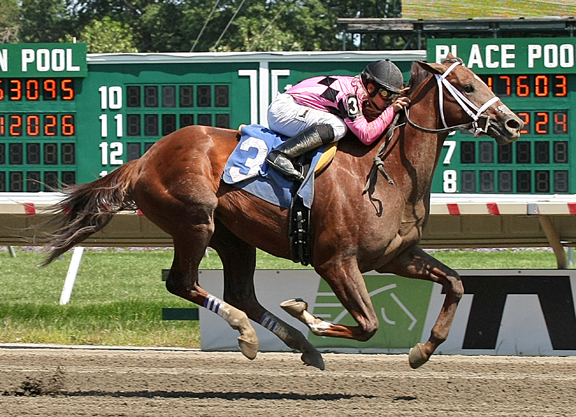 Full of Run (Power Broker) was slow to get going, but lived up to his name in the stretch, uncorking an extremely powerful run to don cap and gown at first asking by a widening 3 1/2 lengths and be named a 'TDN Rising Star' at Monmouth Park Saturday. The $70,000 KEESEP buyback took nibbles in the wagering, but ultimately went off at 4-1. Away sluggishly, he was far back in second-last early, but started to come alive around the bend. Gobbling up ground with giant strides after spinning very wide into the stretch, he catapulted past rivals to score with authority in 1:03.77. Todd Pletcher firster C K Dexter Haven (Stay Thirsty) and pacesetter To the Hilt (Congrats) were second and third, respectively. The winner becomes the sixth for his freshman sire (by Pulpit), who carried Garry and Mary West's hot pink silks to victories in the 2012 GI FrontRunner S. and 2012 GII Indiana Derby. His dam, who earned $154,080 in a useful 13-win career, hails from the family of GI Stephen Foster H. Bradester (Lion Heart) and GSW Here's Zealous (Dehere). She was picked up by Ben Glass, advisor to the Wests, for $16,000 at the 2014 Fasig-Tipton February sale. Full of Run has a yearling full-sister. Bringingdown Babel failed to get in foal to Power Broker the following year, and was bred to both he and Flashback this past season.