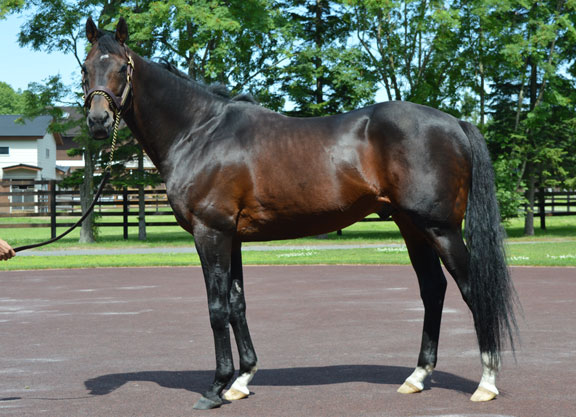 For the first year since 2008 there will be no Deep Impact (Jpn) foals born this season, but the late Shadai resident was still Japan's champion sire in 2020, a title he has held without pause since 2012. That was the year his eldest runners were four; he had also been champion first-season sire in 2010.

He had already been responsible for former Horse of the Year Gentildonna (Jpn) but Deep Impact's crowning glory among his many talented colts has come posthumously, with his son Contrail (Jpn) having become his sixth Derby winner–and third in a row–on the middle leg of taking the 2020 Triple Crown. Bred by Koji Maeda's North Hills Farm, Contrail has been beaten just once in his eight starts when finishing second at the end of November in the Japan Cup to the country's retiring champion Almond Eye (Jpn). There's no shame in being defeated by the Horse of the Year and Contrail ended 2020 with a rating of 122, just two behind Almond Eye.

The 5-year-old Almond Eye has a huge following even beyond Japan and she is very much the star performer for her sire Lord Kanaloa (Jpn), who was the leading active sire of 2020. The 13-year-old sired Group 1 winners in three different countries in 2020, with Almond Eye being backed up by Tagaloa (Aus), winner of the G1 Blue Diamond S. in Australia, while Danon Smash (Jpn) took the G1 Hong Kong Sprint.

Like Deep Impact, Lord Kanaloa has been graced with huge books ever since his retirement to stud. From 2014, when he covered 254 mares, he climbed to a high of 307 in 2018.

While Deep Impact's dominant father Sunday Silence still features as either sire or grandsire of six of the top 10 stallions in Japan in 2020, Kingmambo's influence remains strong. That comes essentially through his late son King Kamehameha (Jpn), who was champion sire in the two years before Deep Impact's long reign started and was fifth this time around, and through King Kamehameha's sons Lord Kanaloa and Rulership (Jpn).

Sunday Silence's 20-year-old son Heart's Cry (Jpn) was runner-up in 2019 and slipped a place to third in 2020. His leading performer, Salios (Jpn), chased home Contrail to be second in both the Japanese Derby and 2000 Guineas and won the G2 Mainichi Okan.

The 2011 Triple Crown winner Orfevre (Jpn) was next in the table and among his group stakes winners in 2020 was the durable mare Lucky Lilac (Jpn), who has won at the highest level as a 2-year-old and at four and five. In 2020, she recorded her second win the G1 Queen Elizabeth II Cup as well as victory in the G1 Osaka Hai, beating subsequent G1 Arima Kinen winner Chrono Genesis (Jpn) (Bago {Fr}).

The aforementioned Rulership (Jpn) is another among the Japanese ranks to have previously been represented by a top-flight international performer with his son Mer De Glace (Jpn) having won the 2019 Caulfield Cup. The 14-year-old's sixth place finish in the sires' championship helped boost the sire-of-sires claim of King Kamehameha, who, like Deep Impact, died in the summer of 2019.

Of note among the younger sires bidding to establish themselves, last year's freshman champion Kizuna (Jpn), a son of Deep Impact, was 12th overall. He improved on his previous season's tally of 27 2-year-old winners to make it 31 this time around. His second crop of foals, though still large at 138, was down from 184 in his debut season. He is yet to sire a Group 1 winner but had two Group 2 and two Group 3 winners last year.

His contemporary in the stallion ranks, Epiphaneia (Jpn), by Symboli Kris S, may have notched 50 fewer winners than Kizuna but he has the distinction of having a first-crop winner of the Fillies' Triple Crown, Daring Tact (Jpn), who was also third behind Almond Eye and Contrail in an epic running of the Japan Cup.

Japan's first-season sires' list was headed by King Kamehameha's Japanese Derby and Guineas-winning son Duramente (Jpn), who covered almost 300 mares in each of his first two seasons at Shadai Stallion Station and recorded 35 winners from his first group of runners. Close behind him on 32 was the good-looking Maurice (Jpn), a son of Screen Hero (Jpn) who won six Group 1 races in Japan and Hong Kong and has also shuttled to Arrowfield Stud in Australia.