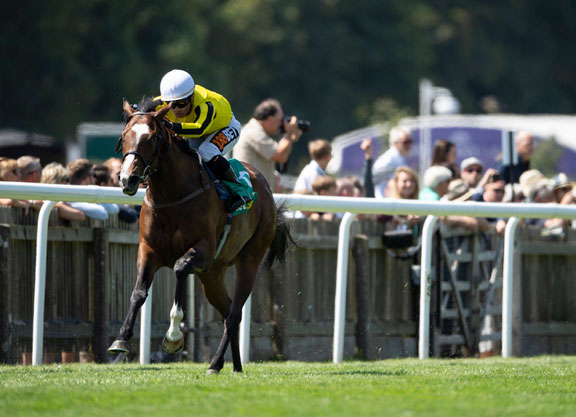 Prior to Sunday, all five of France's pattern races for juveniles have gone to British raiders and there is little reason for expectation that Deauville's G1 Darley Prix Morny will stay at home. In a damning verdict on the state of the health of the country's 2-year-old scene, only two domestic representatives line up with both having already been upstaged by the visiting Signora Cabello (Ire) (Camacho {GB}) in the 5 1/2-furlong G2 Prix Robert Papin at Maisons-Laffitte July 22. A neck and 1 1/4 lengths behind that G2 Queen Mary S. winner when second and fifth in that contest respectively, Sexy Metro (Fr) (Diamond Green {Fr}) and Simply Striking (Fr) (Kheleyf) have it to do in the face of an even stronger cross-channel raid.

Chief among the overseas threat is the Gredleys' Pretty Pollyanna (GB) (Oasis Dream {GB}), who was remarkably impressive in the G2 Duchess of Cambridge S. over this six-furlong trip at Newmarket July 13 and is already the number one Classic prospect for 2019 among her sex. Her seven-length defeat of the subsequent G3 Princess Margaret S. winner Angel's Hideaway (Ire) (Dark Angel {Ire}), with the G3 Sweet Solera S. first and second Main Edition (Ire) (Zoffany {Ire}) and La Pelosa (Ire) (Dandy Man {Ire}) well behind, stands up to the closest inspection and this is simply at her mercy if she reproduces that. Trainer Michael Bell is no stranger to success in this prestigious affair and said, “Taking on the colts is ambitious, but we've won it with a filly before in 1994 [Hoh Magic]. She had been showing plenty, but the Duchess of Cambridge performance definitely caught me on the hop. You don't ask them at home to do that, the only time you want them to do anything like that is on the racecourse.”

If Pretty Pollyanna fails to shake off Phoenix Thoroughbred and Zen Racing's Signora Cabello, few would argue against the latter in a fight as she proved in the Queen Mary at Royal Ascot and the Robert Papin. Trainer John Quinn hopes she can stay close enough to make her prime asset count. “It's another step up, but we're very happy with her. She seems very well,” he commented. “We've always felt six furlongs would be well within her compass and she wasn't stopping over five and a half furlongs last time. She's done nothing wrong and we're hoping for a big run.” Aidan O'Brien relies on the hardy colt Land Force (Ire) (No Nay Never), who is re-opposed by Marie's Diamond (Ire) (Footstepsinthesand {GB}) after they finished first and second in Goodwood's G2 Richmond S. last time Aug. 2.

In the G1 Darley Prix Jean Romanet, Al Asayl Bloodstock's G1 Prix Vermeille heroine Bateel (Ire) (Dubawi {Ire}) will be a warm order coming off a return success in the G2 Prix Corrida over 10 1/2 furlongs at Saint-Cloud May 21. Intriguingly, the G1 Fillies' Mile, G1 Prix de l'Opera and G1 Lockinge S. scorer Rhododendron (Ire) (Galileo {Ire}) is tried in blinkers having flopped when last of six in the G1 Nassau S. at Goodwood Aug. 2 and it was notable how well-supported she was on that occasion despite Ballydoyle's stable form. Barnane Stud's July 1 G1 Pretty Polly S. winner Urban Fox (GB) (Foxwedge {Aus}) was second in the Nassau and is probably the main danger to Bateel, while 'TDN Rising Star' Lady Frankel (GB) (Frankel {GB}) is a fascinating contender from Andre Fabre's stable. Successful in the G3 Prix de Lieurey here last August and third to Rhododendron in the Opera, Gestut Ammerland's homebred shaped with real promise when second on her comeback in the July 8 Listed Prix de la Calonne over this venue's straight mile last time.

A card of quality action also features the G2 Darley Prix de Pomone over the unusual trip of 12 1/2 furlongs, where Highclere Thoroughbred Racing's May 1 G3 Prix Penelope winner Luminate (Ire) (Lawman {Fr}) has a go at a trip that connections feel will bring out the best in her. Only 12th of 13 in the G1 Prix de Diane over two furlongs shorter at Chantilly June 17, she has subsequently been freshened up and Harry Herbert is confident she will be seen in a better light here. “Everything went wrong in the Diane, but it turned out she had a sore back after that race,” he explained. “Thankfully she has come back fine and it will be interesting to see how she runs on Sunday. She is in very good form, according to Freddy Head, and is moving well. If the ground is soft we are hoping for the best. It is a very tough race but she is in good shape.”

The British pair God Given (GB) (Nathaniel {Ire}) and Precious Ramotswe (GB) (Nathaniel {Ire}) follow each other around and after third and fourth placings in Haydock's 12-furlong G2 Lancashire Oaks July 7 they were then fourth and sixth respectively in the G3 Lillie Langtry S. over an extra quarter mile at Goodwood Aug. 2.