Poet’s Word Downs Cracksman In the Prince of Wales’s 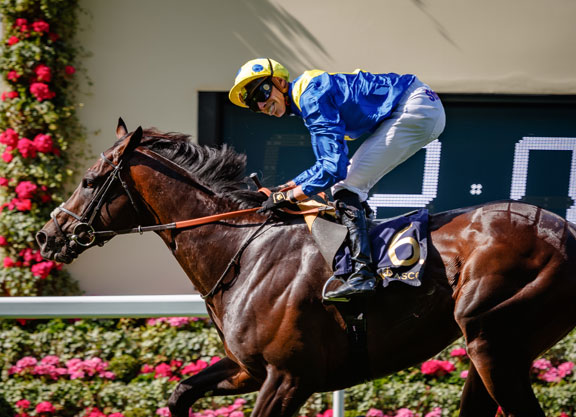 Sir Michael Stoute had been waiting two years to exceed the late great Sir Henry Cecil’s record of 75 Royal Ascot winners and the genie of Freemason Lodge chose some stage to do it as one of the dyed-in-the-wool improving older horses he is so famed for, Poet’s Word (Ire) (Poet’s Voice {GB}), took the feature G1 Prince of Wales’s S., a “Win And You’re In” qualifier for the GI Breeders’ Cup Turf at Churchill Downs in November. Sent off the 11-2 second favourite with all the focus naturally on Cracksman (GB) (Frankel {GB}), the G3 Brigadier Gerard S. winner travelled beautifully for James Doyle tracking that 2-5 favourite who gave out contrasting signals from the very beginning with yet another sluggish display to match his Epsom effort. When it came down to a fight in the straight, it was short-lived as Saeed Suhail’s 5-year-old readily brushed him aside passing the two-furlong pole en route to a convincing 2 1/4-length success, with eight lengths back to Hawkbill (Kitten’s Joy) in third. “It’s a relief, as we were stuck on it [75] last year and we’ve been very lucky to have some good horses down the years,” Stoute said. “Maybe Cracksman isn’t at his very best now, but we’ve beaten the others comprehensively and he’s a consistent, brave and sound horse.”

First successful in this in 1981 with Hard Fought (GB), four years after his first Royal Ascot success, Stoute had only won it again once in the interim which is surprising given his stellar record with older horses in this category. It is established fact that he is the foremost trainer of at least the last three decades at honing talent incrementally and building a horse towards an ultimate goal which is always judged within its compass. A longheld believer in the notion that in racing there is no such thing as surprise, only disappointment, he obviously had his keen eye trained on Poet’s Word from an early stage as anybody would with a 300,000gns Tattersalls October graduate. Instead of contesting the 2016 Derby, the bay was instead placed in the 10-furlong handicap that Stoute had won with Conduit (Ire) (Dalakhani {Ire}) but he came up short in fourth and consequently stayed in handicap company for the rest of that campaign.

Finally let loose in pattern company last May, Poet’s Word was a neck second to Deauville (Ire) (Galileo {Ire}) in Chester’s G3 Huxley S. over this trip before taking the 12-furlong G3 Glorious S. on testing ground at Glorious Goodwood in August. There were strong vibes about him prior to the G1 Irish Champion S. at Leopardstown the following month and he lived up to them when a half-length second to Decorated Knight (GB) (Galileo {Ire}) in that feature, but Cracksman beat him seven lengths in the G1 Champion S. here with no obvious excuses. Kept on the go throughout the winter after his relatively light 4-year-old season, he was sixth in the G1 Hong Kong Cup at Sha Tin Dec. 10 and second to Hawkbill in the Mar. 31 G1 Dubai Sheema Classic at Meydan prior to becoming the 10th stable winner of the Brigadier Gerard.
With Cracksman never happy at any stage despite the strong pace set by the over-keen Eminent (Ire) (Frankel {GB}), James Doyle enjoyed a straightforward trip through the race tracking the Oppenheimer homebred at two lengths distance throughout. Rounding for home, Frankie was rowing away on the market leader whereas his adversary was still sitting pretty and the writing was soon on the wall. Dettori went for his whip even before they reached the two pole and Doyle was quickly on him baying for blood, but Poet’s Word had his head lowered and running with resolution while Cracksman was galloping in the air. For the winning jockey, the result was never in doubt. “I could see even after a furlong that Cracksman was under pressure to hold his pitch and all the way up from Swinley Bottom to the home turn I was travelling all over him, it was just a case of hanging on,” he explained. “They went a hell of a pace all the way and I was going easy, but in the back of my mind I knew this horse stays a mile and a half so I still wanted to press the button early enough. Sir Michael is a master trainer with horses like this, as he is just very patient with them. It is nice to ride a landmark winner for him like this.”

Stoute reflected on his achievement and was quick to praise his stable team and the legend he finally eclipsed. “Henry [Cecil]’s record was formidable, because he accumulated those numbers when there were four days of Royal Ascot for most of his career and the five-day meeting hasn’t been implemented for that long,” he said. “Nobody respected him greater than I did as a trainer. We are very glad it has happened and it is a great reflection on the staff. Last year at Royal Ascot, we had plenty of runners and had five beaten favourites, so I’m pleased to just win any race as we only needed one winner! I love the game and we have great staff and very supportive owners, so I’d like to keep going for a little while more. Certain horses that stick out include, of course, Etienne Gerard who was our first winner and Shareef Dancer, who was a very expensive 1981 yearling and won the King Edward VII Stakes in 1983. Shareef Dancer was the first horse Sheikh Maktoum Al Maktoum gave me.” Of the winner he added, “Poet’s Word has been performing creditably in group 1s and I am delighted for him to win one. We’ll take our time with him before deciding on future plans, but he could go for the [G1] Coral-Eclipse [at Sandown July 7] or the [G1] King George VI & Queen Elizabeth Stakes [back at Ascot July 28]. There are a lot of options with him, as I think he is equally effective over 10 and 12 furlongs and there are not many that are. Anybody would love training this horse as he is so sound and honest.”

John Gosden offered the view that Cracksman had his mind on other matters. “He is a clever horse and he was welcoming all the fillies that were walking back from the Duke of Cambridge on the way back to the stables,” he explained. “I think we need to concentrate his mind, as we know the ability is there. His run wasn’t too dissimilar to Epsom, as going up the hill there he wasn’t really travelling even on good-to-soft ground. The other horse had him covered from two out. To my mind, he is just playing around a little bit. He did it at Epsom, but he didn’t do it first time out at Longchamp. He has always been a laid-back horse and he is beyond laid-back now, so we will get him home and sharpen him a little bit ahead of the King George. At no stage was he travelling or carrying Frankie.” Dettori added, “He’s not the same animal I was riding in the spring and not the Cracksman I know. He was very lethargic and was never travelling at any stage. I gave him every chance and usually when he turns for home, the turbo kicks in but today it was very one-paced. It was not his run.”

Charlie Appleby was pleased with the effort of Hawkbill. “William [Buick] felt the ground is quick enough out there–it’s good-to-firm and lovely summer ground, but our horse has won on good and it was fast enough for him. William also said he felt the blinkers were the way forward and to keep them on him–he felt he had every opportunity to lose interest coming into the straight, but he kept on, was honest and that gained us third place. The [G1] Juddmonte International [at York Aug. 22] looks like being his forte–it’s easier to get on the lead in a race like that, rather than having to dictate it yourself as you do overseas.”