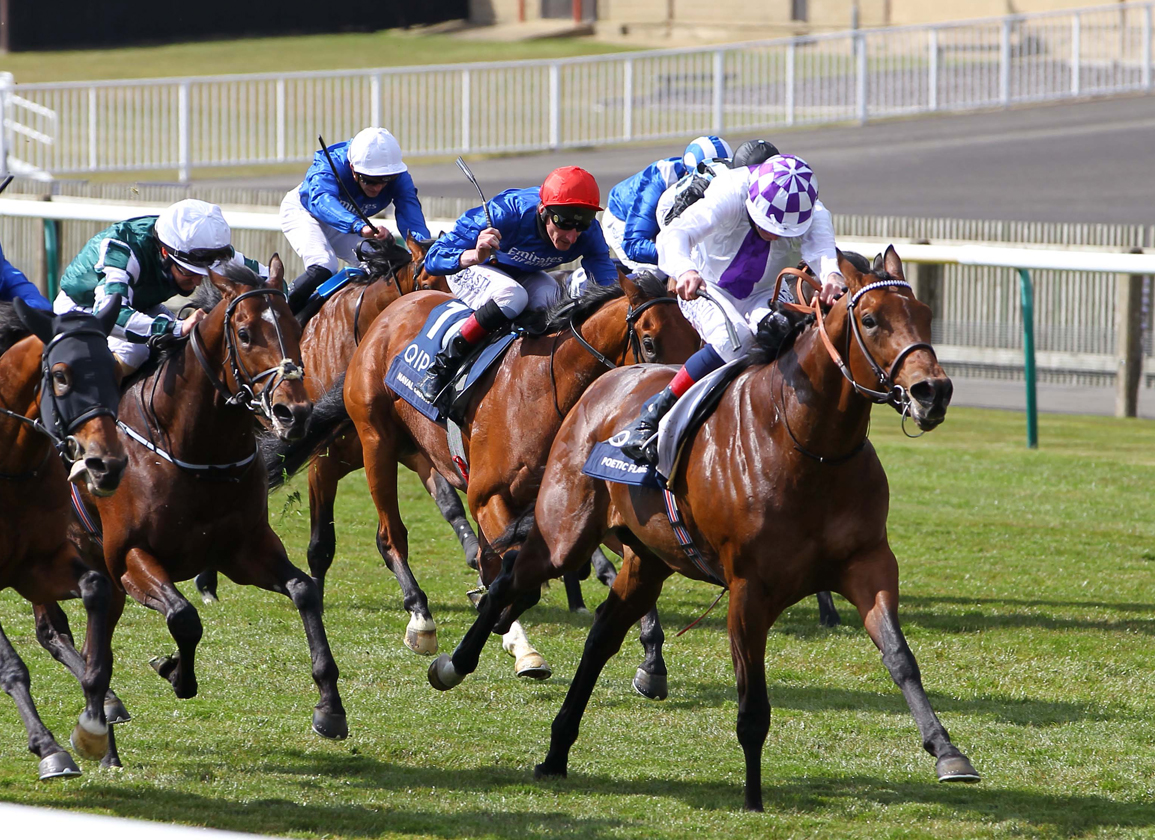 Poetic Flare (Ire) (Dawn Approach {Ire}–Maria Lee {Ire}, by Rock of Gibraltar {Ire}), the top-rated 3-year-old miler of 2021, has been retired from racing and will stand at Shadai Stallion Station in Japan from next year.

Winner of the G1 2000 Guineas and G1 St James's Palace S., the colt has provided his master trainer Jim Bolger with perhaps the pinnacle of his parallel career as a breeder, for he not only bred, owned and trained Poetic Flare's sire and fellow Classic winner Dawn Approach, but he also trained his grandsire New Approach (Ire), whose five Group 1 victories included the Derby. Furthermore, Bolger bred Poetic Flare's first two dams and trained his third dam.

Poetic Flare was not among Monday's five-day confirmations for the G1 Queen Elizabeth II S. on QIPCO British Champions Day, which would have provided a potentially thrilling rematch with top older miler Palace Pier (GB) (Kingman {GB}), who beat the 3-year-old by just a neck in a pulsating finish to the G1 Prix Jacques Le Marois at Deauville in August.

“I'm sure many racegoers will be disappointed not to see him at Ascot, and I am disappointed myself that he is not going there, but it was not possible,” Bolger told TDN on Tuesday. “He will be standing at Shadai and will be leaving soon for Japan.”

Of the sale of a colt to the Yoshida family's powerful stallion operation, he added, “This is a first for me, but it is a great opportunity for the horse and I will be supporting him with mares myself, even though it won't be that straightforward.”

Poetic Flare started his career by winning the first 2-year-old race of the 2020 season at Naas but a growth spurt meant that he wasn't seen again until lining up for the G1 Darley Dewhurst S. some seven months later. He finished 10th that day, almost nine lengths behind the winner St Mark's Basilica (Fr) (Siyouni {Fr}), but finished his juvenile campaign in style by winning the G3 Killavullan S. at Leopardstown just a week later. Another seven days after that his stablemate and fellow Bolger-bred Mac Swiney (Ire) (New Approach {Ire}) gave another boost to the sireline by winning the G1 Vertem Futurity at Doncaster. The pair would meet again the following May at The Curragh when Mac Swiney narrowly got the upper hand in testing conditions for the Irish 2000 Guineas, but by then Poetic Flare had already won the QIPCO 2000 Guineas at Newmarket and contested the French equivalent, finishing sixth in the G1 Poule d'Essai des Poulains.

Campaigned rigorously by Bolger, the powerfully built Poetic Flare bounced back at Royal Ascot to post a commanding victory in the G1 St James's Palace, beating runner-up Lucky Vega (Ire) (Lope De Vega {Ire}) by 4 1/2 lengths. The following month he was back in action in the G1 Sussex S., in which he was beaten into second by Alcohol Free (Ire) (No Nay Never), with the G1 Falmouth S. winner Snow Lantern (GB) (Frankel {GB}) behind him in third.

His narrow defeat in the Jacques Le Marois was followed by what transpired to be the final start of his career when finishing less than a length behind St Mark's Basilica for third in the G1 Irish Champion S. on his first attempt over 10 furlongs.

Ridden throughout his career by Bolger's son-in-law Kevin Manning in the colours of the trainer's wife, Jackie, Poetic Flare, who is out of the Rock Of Gibraltar (Ire) mare Maria Lee (Ire), raced 11 times for five wins and four places, with his earnings just passing £1 million.

He is a member of the fourth crop of the former champion 2-year-old Dawn Approach, who went on to complete the 2000 Guineas and St James's Palace S. double later emulated by his son. Dawn Approach spent the first seven seasons of his stud career at Darley's Kildangan Stud in Ireland, but as support for him dwindled he returned to his birthplace of Bolger's Redmondstown Stud in 2021, where he covered around 40 of his breeder's own mares.

Shadai Stallion Station on the Japanese island of Hokkaido is currently home to 31 stallions. Teruya Yoshida lost his flagship sire Deep Impact (Jpn) in July 2019 after the multiple champion suffered a cervical fracture.