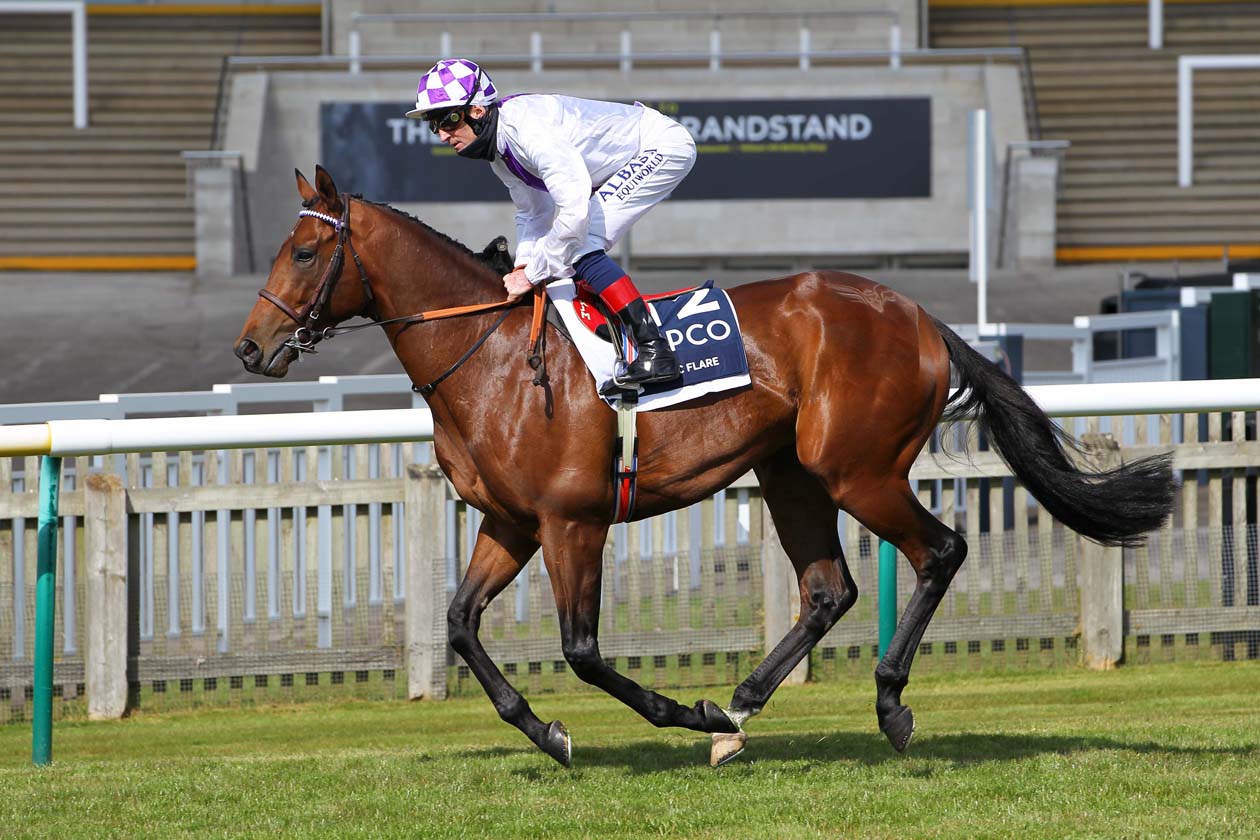 Jim Bolger has some unfinished business to take care of on Sunday, having gone agonisingly close to an unprecedented English-French-Irish Guineas treble in 2007 with Finsceal Beo (Ire) (Mr. Greeley). Denied by a head by Darjina (Fr) (Zamindar) in the second leg at ParisLongchamp, the “living legend” went on to add the Irish equivalent and it is a unique Guineas treble that is on the mind of the Coolcullen maestro once again in 2021.

With an extra seven days than his brilliant filly had between the G1 2000 Guineas and the G1 Emirates Poule d'Essai des Poulains for his latest project Poetic Flare (Ire) (Dawn Approach {Ire}), this second part of the ambitious tilt at least seems achievable. Bolger's horses have proven time and again that they can back up quickly, so the 15-day gap that his May 1 Newmarket Classic hero has enjoyed is a relative holiday and he also has an ideal draw in four. Due to the customary eight-day period between the English and French mile monuments, the 2000 Guineas hero has not even attempted the double in recent decades but the veteran owner, breeder and trainer has spotted an opportunity to create some history.

“I'm hoping to do them all, all going well,” he said, referring to the triumvirate of European Classics which culminates at The Curragh next Saturday. “I haven't had many runners in the French Classics–Finsceal Beo was the only one, I think. He's come of Newmarket well and I've no worries about the ground.”

Irish racehorses have come even more to the fore in recent weeks under both flat and National Hunt codes and it would be no surprise if this Classic was another prestige event to be dominated by the country. Poetic Flare's sole defeat came in a soft-ground G1 Dewhurst S. won by compatriot St Mark's Basilica (Fr) (Siyouni {Fr}), although there were mitigating circumstances for that effort as Bolger's homebred was coming into that off a lengthy break. St Mark's Basilica now has to play catch-up with the colt he left trailing in Newmarket's juvenile showcase, but the half-brother to Magna Grecia (Ire) (Invincible Spirit {Ire}) will be at home on this easy surface. “It was always the plan for him to run in the 2-year-old race on Arc day [the Prix Jean-Luc Lagardere], but he didn't and that is why he ended up going to Newmarket,” Aidan O'Brien said. “After that it was always the plan then that he would go to France for this race. I think he's a miler, but when Frankie [Dettori] rode him in the Dewhurst he said then he'd get further than the Dewhurst trip, so you'd think he might get a bit further at three.”

As far as the home team is concerned, the G3 Prix de Fontainebleau is a key course-and-distance trial and the latest edition Apr. 18 went to the imposing Policy of Truth (Fr) (Siyouni {Fr}) at the expense of the runaway G1 Prix Jean-Luc Lagardere hero Sealiway (Fr) (Galiway {GB}). The latter's trainer Frederic Rossi is convinced that Haras de la Gousserie and Guy Pariente's representative has made marked improvement from that comeback and it is hard to forget his emphatic eight-length victory on testing ground in the Lagardere. “Sealiway is getting stronger,” he said. “His last work was very satisfactory and I hope the ground will be on the soft side. I don't think that there is one particular standout horse.”

From Britain is Hambleton Racing's Mehmento (Ire) (Mehmas {Ire}), a member of Archie Watson's stable who comes here on the back of a second in the G3 Greenham S. at Newbury Apr. 18. Bizarrely, his early education was solely on Southwell's Fibresand with two wins there by a cumulative margin of 22 1/2 lengths Jan. 15 and Feb. 25. The syndicate's head racing manager Cosmo Charlton said, “He's in really good form and Archie is very happy with him, so fingers crossed he runs well. It was only his third start at Newbury, so hopefully there's more improvement to come. It's a big step up again. You've got the 2000 Guineas winner in there and Aidan O'Brien's Dewhurst winner, so those two are going to be hard to beat. If we can be in the mix to make the frame we'll be absolutely delighted.”

Where Finsceal Beo failed narrowly in completing the 1000 Guineas-Poule d'Essai des Pouliches double, the current Newmarket Classic title-holder Mother Earth (Ire) (Zoffany {Ire}) bids to put that right on Sunday. She is joined by the fellow Irish-trained Miss Amulet (Ire) (Sir Prancealot {Ire}), who was just a neck behind the Ballydoyle repesentative when third in the GI Breeders' Cup Juvenile Fillies Turf at Keeneland in November. Miss Amulet has a big disadvantage of the widest draw in 13 and that allied with the fact that Mother Earth also has a fitness edge over her means that it would be a remarkable training feat from Ken Condon if she overcomes. “She accumulated plenty of experience as a juvenile with eight runs, she's been abroad and obviously finished her year in the Breeders' Cup so she's not lacking in that department,” he said. “She does like nice ground too and I didn't think the likelihood of nice ground in the trials in the spring was probably realistic, so we were happy to go straight there.”

Miss Amulet's stamina has to be taken on trust, but Condon is happy to find out. “You'd need to see more evidence, I suppose, before you could be categorical about the trip but to my eyes she ran on well and was strong going to the line at Keeneland,” he added. “We've had an uninterrupted prep. She's fit and looks a picture; all is well with her. She's not a flamboyant worker or anything like that, but she's done everything we've wanted. She's been on the grass with all the fillies here at The Curragh, and she won't lack for fitness anyway. She's drawn 13, which will be difficult out there but I'll speak with Ioritz Mendizabal and Michael, and we'll try to formulate a plan.”

Andre Fabre has opted to revert to a mile with Godolphin, Ecurie des Monceaux and Ecurie Skymarc Farm's unbeaten Philomene (Ire) (Dubawi {Ire}) following her success over 10 1/2 furlongs in the Apr. 6 G3 Prix Penelope at Saint-Cloud. As a May-foaled half-sister to Magic Wand (Ire) (Galileo {Ire}) and Chicquita (Ire) (Montjeu {Ire}), this is a bold move but her trainer has made many leftfield decisions throughout his remarkable career with much success. “Philomene is a very straightforward filly, who has enjoyed an uninterrupted preparation,” Godolphin's Lisa-Jane Graffard commented. “Dropping her back in trip came under discussion very quickly after the Prix Penelope and Andre Fabre felt this race worked best for her timing-wise. She is a filly with a lot of class and Andre has very few worries about the trip. It's obviously unusual to drop back in distance from a [Prix de Diane] prep race to the Pouliches, but it has been done before and he felt that it was the right thing to do. This is very much a springboard for the Prix de Diane, but we are hopeful that she can run very well.”

“Sweet Lady is in great shape and the more rain there is, the happier I will be,” trainer Francis-Henri Graffard said. “She ran well in the Prix de la Grotte, which was a bit of a strange race with little pace. Christophe Soumillon looked after her that day. She has improved a lot for the run and looks in very good order to me. We are following the tried-and-tested route.”

Another proven prep is the G3 Prix Imprudence and it was Yeguada Centurion SL's Reina Madre (Ire) (Kingman {GB}) who prevailed in that seven-furlong contest over Deauville's straight track Apr. 8. As she was on that occasion, she is a live outsider again along with Amo Racing and Charles Obank's G3 Prix Miesque winner Lullaby Moon (GB) (Belardo {Ire}). The latter's trainer Ralph Beckett is wanting rain. “Lullaby Moon has worked well this spring and is ready for this task,” he said. “Every drop of rain that falls up to post time will help.” This is the swansong for Tiger Tanaka, who was sixth in the nine-furlong G3 Prix Vanteaux here Apr. 11 following her heavy defeat in the Prix la Camargo. “Tiger Tanaka is doing well–she showed us that she was in very good order during her work on Wednesday,” trainer Charley Rossi commented. “I think this will be her last race. She has had some health issues in the past and we want to do what is right by her. It is a great privilege to train such a filly. It is thanks to her that my wife, Jessica Marcialis, made racing history. Tiger Tanaka certainly has captured the imagination.”

At Naas on Sunday, 'TDN Rising Star' Contarelli Chapel (Ire) (Caravaggio) works towards Royal Ascot in the G3 Coolmore Stud EBF Fillies Sprint S. So impressive over this course and six-furlong trip Apr. 26, the half-sister to Fancy Blue (Ire) (Deep Impact {Jpn}) is taken on again by the third-placed Freedom of Speech (Ire) (Australia {GB}) who has since come back here to win May 8. “She seems in good form since winning at Naas,” trainer Aidan O'Brien said of the likely hot favourite. “She hasn't done much obviously, but we're very happy with her since. This will tell us what our next option will be, whether that's Royal Ascot or somewhere else, but we are happy with her. Having won already in Naas is obviously a positive and we were delighted with her that day.”

Leopardstown's Listed Ballylinch Stud 2000 Guineas Trial over an extra furlong Apr. 11. He takes on last year's G3 Anglesey S.  one-two A Case of You (Ire) (Hot Streak {Ire}) and Lipizzaner (Uncle Mo) and trainer Ken Condon is happy to be sending him back to what looks an ideal distance. “He's been very well since he ran in the Guineas Trial and, of course, it goes without saying the form of that is working out very well,” he said. “He has a penalty on Sunday, but he's entitled to carry that for what he did last year. It was a very nice comeback run under a penalty–I was pleased with that and I think he's come forward for it. He's a hard horse to read, to be categorical about his optimum. There were diverging opinions, but I think the owners as a collective decided after the Guineas Trial to target this race and come back in trip.”