Plying A Game-Changer For Jossestown Farm 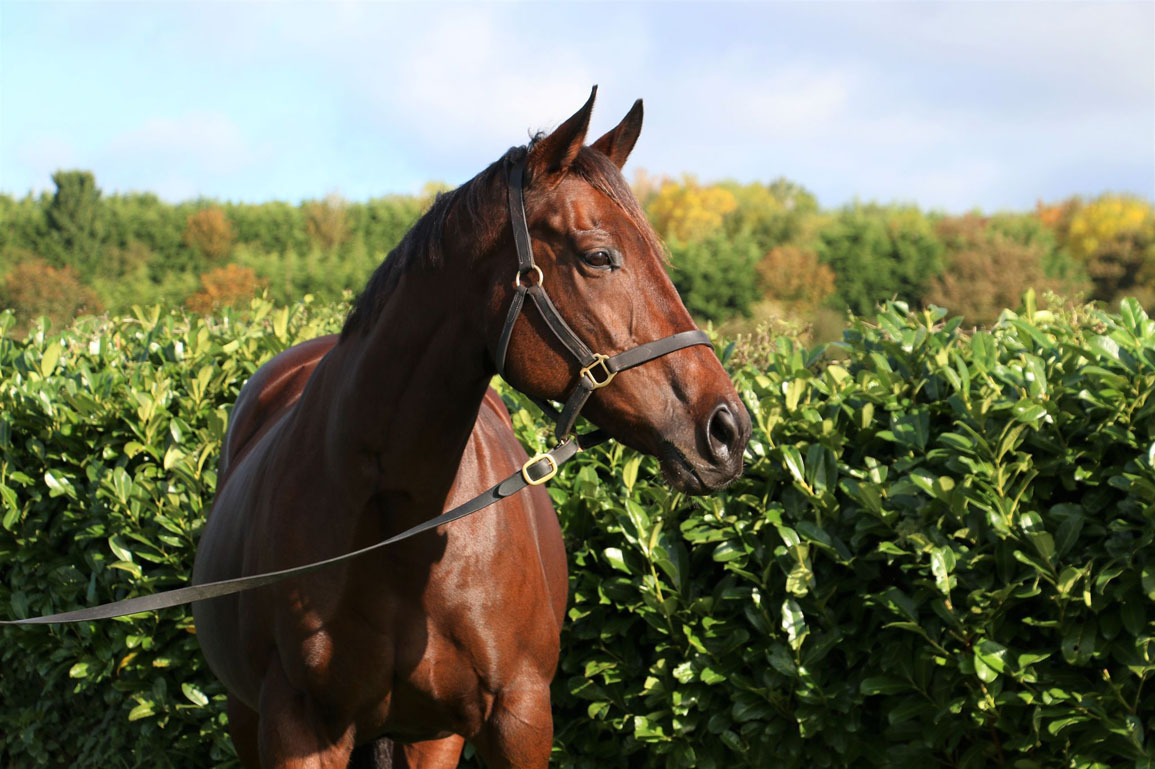 In life and in bloodstock, the confluence of a few small factors–decisions that may seem minute at the time–can quickly amalgamate into life-changing moments.

Like, for instance, when Martin Cooney and Elaine Shaw opted to raise their hands at €21,000 during the 2018 Goffs November Breeding Stock Sale on an 8-year-old daughter of Hard Spun whose first two foals had not yet found the winner's enclosure; while, simultaneously, another bidder hesitated, and ultimately changed their mind too late.

“Too late, sir,” the auctioneer called, hammering Plying down to Jossestown Farm.

Three years later, Plying will make the return trip from Jossestown Farm in Fethard to the Goffs November Breeding Stock Sale on Friday under much different circumstances. Bidders will be much less hesitant on the mare, in foal to Lope De Vega (Ire) (lot 1185), who is now a multiple stakes producer and the dam of triple Group 1 winner Alcohol Free (Ire) (No Nay Never). And the final price will be many multiples of what Cooney and Shaw paid for her.

“We'll be sad to see her go,” Cooney admitted. “She's part of the furniture at this stage, but she's worth a lot of money, we hope, and that money could do a lot for us going forward.”

Cooney, who has dabbled in many facets of the business including riding over jumps and working under the likes of PJ Colville-“a great horseman and person to have on your side”–Mouse Morris, Enda Bolger and Harry Fry, has more recently turned his focus back to Jossestown Farm, where he grew up, with hopes of growing his business of breeding and pinhooking a few National Hunt horses to boarding mares and consigning for clients. A Starspangledbanner (Aus) filly and Dandy Man (Ire) colt sold out of Plying have already helped further than dream, and Cooney acknowledged that capital gained from the sale of Plying would take Jossestown Farm to the next level.

“She's one in a million and they're hard to come across,” said Cooney. “As Jossestown Farm is only starting out you'd love to keep her, but if she's to fetch a huge sum of money it could do a lot for us. I'm after putting up a barn and I want to take in horses for clients and do a bit of everything. I like consigning and pinhooking. I have a few mares for boarding, so I want to go down that line. You need a proper facility and I have that just about finished now. That kind of money would finish it off.”

Cooney and Shaw-who currently works at Kiltinan Castle Stud foaling and prepping yearlings after a six-year tenure with Coolmore–arrived at Goffs in November of 2018 “with the idea of buying a mare that would produce you foals and turn over a bit of money.” From an initial shortlist of five they narrowed it down to two, and after the first went above their budget, it was down to Plying.

Bred by Rabbah out of the listed-placed Fairy King mare Nasaieb (Ire), Plying was knocked down to Mark Johnston for $200,000 at the Fasig-Tipton Saratoga Sale as a yearling before ultimately going into training with Henri-Alex Pantall for Sheikh Mohammed. Plying started six times at two in 2013, winning twice at Toulouse and once at ParisLongchamp over 1300 and 1400 metres. Offered by Darley at that year's Arqana December Breeding Stock Sale, Plying was bought by Churchtown House Stud through BBA Ireland for €12,000. Michael Gaffney's Churchtown House was, in fact, getting back into the family, having bred Plying's dam Nasaieb and having sold her to Saeed Manana for 100,000gns as a yearling. Gaffney bred Plying's first four foals, Alcohol Free being the last, before putting both Plying and Alcohol Free, as a foal, into the Goffs November Sale of 2018. Plying was bought by Cooney and Shaw for €21,000 in foal to Starspangledbanner, while Alcohol Free fetched €40,000 from Jeff Smith's Littleton Stud the day before her dam sold.

Though Plying's first two foals had not yet won at the time of their dam's third trip through a sales ring, Cooney said it was the quality of her prior coverings that stood out to he and Shaw.

“Plying had had a couple of foals before she went for sale,” he said. “She had had a Camelot, a Zoffany, and Alcohol Free was sold the day before she was. So she had those coverings that we probably couldn't afford, and those sires would have a great chance of producing a winner. That was why she looked inviting, plus she had a Starspangledbanner in the belly, so we were thinking that if she had an any way good-looking foal, and even if it was a filly, she'd nearly pay for the mare quick enough.”

“There were probably five mares we honed in on,” Cooney added. “It came down to two. We went in after one and she made too much money. We went back and looked at Plying again, and it was down to her. Luckily enough the hammer dropped in time; I actually think there was someone else trying to get a bid in.”

Cooney's and Shaw's logic of leaning on Plying's past coverings soon proved out. The mare's second foal, Alexander James (Ire) (Camelot {GB}), won three times the following season including Chantilly's Listed Prix le Fabuleux. The following February, Plying's Starspangledbanner filly made €40,000 at the Goffs February Sale, having missed her original date at Goffs November after colicking on the day of the sale. She was eventually pinhooked by Knockatrina House Stud for 130,000gns and is now in the care of John and Jess Dance, but the €40,000 she brought for Cooney and Shaw nonetheless covered the cost of both Plying and her next mating, to Dandy Man, “so it was like having a free mare,” Cooney reasoned.

Those results alone would have meant a job well done, but just a few months later along came Alcohol Free to rewrite the entire script.

A debut winner for trainer Andrew Balding in August of 2020, the bay filly was second next out in the G3 Dick Poole S., which would have itself been a welcome result for Team Jossestown. What came next, however, changed their lives in a little more than 1:42: battling the speedy Miss Amulet (Ire) (Sir Prancealot {Ire}) up the Newmarket straight, Alcohol Free took the overall advantage well out in the G1 Cheveley Park S. but nonetheless held off all comers to win by a half-length.

Three months later, Cooney and Shaw sold their Dandy Man colt out of Plying at last year's Goffs November Foal Sale for €80,000 to Joe Foley, who is retaining him to race. They took the word of Balding, who insisted Alcohol Free's Cheveley Park win was not a one-off, and held onto Plying, who was in foal to Gleneagles (Ire). Plying produced a filly this spring–which Cooney described as “probably the best foal she's had so far”-before visiting Lope De Vega.

Balding's prediction proved correct and Alcohol Free held up her end of the bargain, winning this year's G1 Coronation S. and G1 Sussex S. to established herself among the very best of her generation, male or female.

“It's hard to explain,” Cooney said of the excitement of following Alcohol Free. “You're kind of nervous watching, hoping and praying that it might actually happen, but kind of in the back of your mind you're thinking, 'are you half mad? It probably won't happen.' You start doubting it as you get closer.”

Alcohol Free's ascent has also provided solace for the Cooney family, with Martin's father Jim having been tragically killed in a car accident less than two weeks after Alcohol Free's Coronation S. win.

“Dad would have got a huge kick out of that,” Cooney said. “He passed away this year and he was a big part of the whole operation. He would be the reason I got into horses. He was a great horseman and was great with his animals. Even watching him watching, it would give me a huge kick.”

Cooney said that seeing the pride his father took in Plying was as rewarding as anything Alcohol Free accomplished on the racecourse.

“To be honest, watching the big smiling face on him going out to the mare would excite me as much as watching her races,” he said. “He liked breeding National Hunt foals, he had one or two nice ones but he never had anything like that mare. He would have treated Plying as his own; he'd have been watching her like a hawk.”

While one chapter comes to a close with Plying bidding farewell to Jossestown Farm, another is very much being written. Thanks in large part to her contributions, the future looks bright at the Cooney family's farm.

“I suppose I had it in the back of my mind that my father probably wanted me to come home and take over the family farm, so to be honest it was always in my head to come home,” Cooney said. “To be honest I live and breathe Jossestown Farm. I spend night and day on it.

“Myself and Elaine went to buy Plying with the idea of buying a mare that would produce you foals and turn over a bit of money, and it turned out that we bought a queen. She's one in a million and I might never see one like her again.”