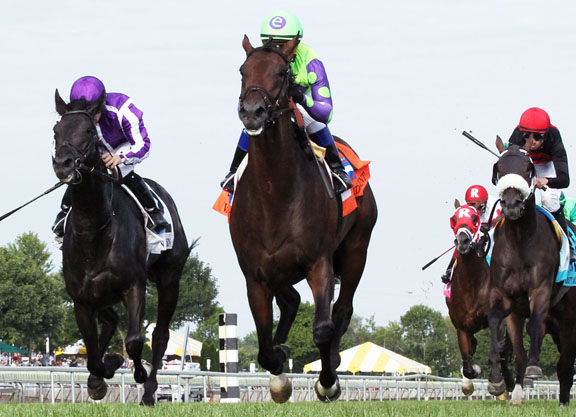 'TDN Rising Star' Valid Point (Scat Daddy) isn't exactly following the script his owners envisioned when they bought him as a $140,000 yearling at the 2017 Keeneland September sale. But the improvised rewrite this undefeated colt is orchestrating just might turn out better than the original story line, because the plot thickened considerably last Saturday when Valid Point roared home a length in front of the GI Secretariat S. field at Arlington Park.

When you consider that Valid Point has only raced three times and has now run the table through a maiden/allowance/Grade I progression, it lends a “sky's the limit” appeal to the KEESEP grad's career arc.

Valid Point is owned in partnership by Bob Edwards' e Five Racing Thoroughbreds and bloodstock agent Mike Ryan. They originally signed the sales ticket under a different partnership name (Holly Springs Stable). Edwards told TDN Tuesday this was because they initially had Royal Ascot aspirations for this bay bred by Westwind Farms out of the Blandford Stud consignment.

“He was going to be an Ascot prospect for Mike and me,” Edwards said. “As a yearling, Mike thought he looked like a racy 2-year-old. He looked like he'd be a precocious Scat Daddy. We liked the way he looked and the way he moved.”

Ryan said that to prepare for the annual Keeneland September sale, he typically starts visiting Kentucky farms six days a week to take stock of yearling prospects around this time of the year. But back in 2017, he didn't get to see this particular colt ahead of time.

“But when I first saw him on the sales grounds, he just blew me away,” Ryan said. “I vetted him off one look. It was a complete surprise that we were in to buy him at that price. And he hasn't disappointed us for sure.

“He showed from the get-go he had a lot of natural ability,” Ryan continued. “For a big horse he was very light on his feet. He moved like a cat. And when we started to train him, he just had the mind of a mature 4-year-old rather than a 2-year-old.

“He's a magnificent-looking horse,” Ryan added. “He's got plenty of size, which he's getting from the Unbridled side. He's out of a mare by Buddha, who was actually a very disappointing sire. And I think that's part of why he was affordable. It was the last crop of Scat Daddy. Everybody wanted one, and they were bringing $500,000, $600,000, and $800,000. The mare had had a few foals, but she really hadn't accomplished a whole lot. That said, I still thought he'd bring $300,000 or $350,000 because he was a very imposing physical horse.”

Edwards said that once Valid Point got to Stonestreet Training & Rehabilitation Center near Ocala, Florida, and started working, “he made a good impression and was moving forward. We tried to position and point him towards Ascot, but it didn't happen like it's supposed to.

“Nothing ever happens like it's supposed to,” Edwards added with a those-are-the-breaks hint of dry humor.

Ryan explained that a non-displaced condylar fracture sustained during the colt's final stateside training move prior getting on an Ascot-bound plane bound is what swept aside Valid Point's entire juvenile season.

Ryan said the surgical procedure to help the injury heal involved the insertion of a screw to compress the bone tight so it would knit properly in conjunction with rest.

“The vets said they have seen horses come back from that [type of injury] better than ever, so it was kind of a wait-and-see thing,” Edwards said. “The team at did a phenomenal job at Stonestreet nursing him back to health, getting him prepped and in condition for [trainer] Chad [Brown]. Then Chad does what Chad does best–get a horse in really good shape. And that set him up for the future.”

“So then the discussion was 'How good is this horse and can we get to the bottom of him through training?'” Edwards said. “Chad didn't breeze him ever on the turf, only on the dirt in pointing him to the Secretariat. We all felt good about it before the race, and we feel even better about it now.”

Valid Point rallied from dead last to win the Secretariat as the second favorite, seemingly unfazed by the change of tactics.

“I don't think [jockey] Javier [Castellano] even touched him,” Edwards said. “It was a hand ride, and the horse won very well. Javier has only had good things to say every time he's ridden him, and he liked this ride coming off the pace the best.”

Both Edwards and Ryan acknowledged it's a bit of an anomaly that Valid Point trains exclusively (and exceptionally well) on the dirt, but that he only races on the turf.

Ryan said “We breezed him a few times on the grass [in Florida before he raced] but he's trained superbly on the dirt. The only time he's been on the grass with Chad was when he won his last three races. He's not one-dimensional. He can relax, he can rate, but he's got a very good turn of foot. And who knows? He may very well [race] on the dirt one day because he trains so well on it. ”

“Based on a quick high-level discussion, maybe the [Sep. 14 GI] Woodbine Mile against older horses,” Edwards said. “There's really nothing for him left at his age bracket. He probably can go farther than a mile just looking at the way he galloped out. But I'll let Chad pick where he's going to go next. He went from an allowance win to Grade I, so I'm not going to second guess. The Breeders' Cup would be the ultimate goal.”

Valid Point is the fifth winner from five starters for his dam, Goldbud, a half-sister to GISW Santa Teresita (Lemon Drop Kid) and to Italian highweight and French G1SP Sweet Hearth (Touch Gold). Goldbud has produced a yearling filly by Orb catalogued as Hip 1187 at next month's Keeneland September sale.