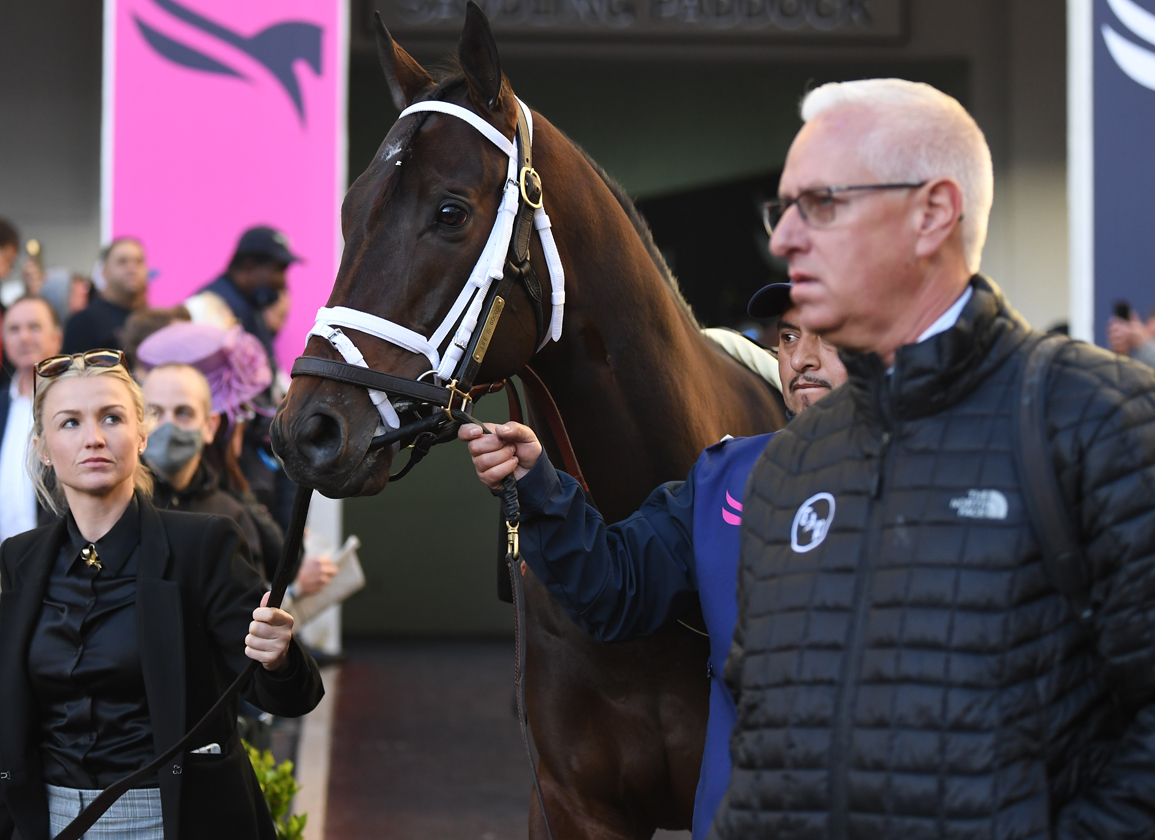 Todd Pletcher with Life Is Good at the Pegasus | Janet Garaguso

Hall of Fame trainer Todd Pletcher joined the TDN Writers' Room presented by Keeneland Tuesday fresh off of a pair of seven-figure wins at Gulfstream and amid one of the hottest streaks of his training life. Sitting down with Joe Bianca, Bill Finley and Jon Green as the Green Group Guest of the Week, Pletcher talked about Life Is Good's dazzling win in the GI Pegasus World Cup Invitational S. and what's next for the superstar son of Into Mischief, a planned Dubai trip for MGISW turfer Colonel Liam (Liam's Map), what he thinks of his ample stable of Triple Crown nominees and more.

Asked about the plan for Life Is Good going into the Pegasus relative to how the race played out, Pletcher said, “When you're coming up with a strategy for a race, you know what you want to do, but you don't always know what your opponent wants to do. I thought when Knicks Go drew the rail, their hands were cuffed and they were going to have to come out running. And we wanted to come out running and play to our horse's strength, which is his speed. It surprised me a little bit that he cleared off as easily as he did. But if you look back to the Allen Jerkens at Saratoga, he's super fast. He was a couple of lengths in front of Jackie's Warrior down the backside. He didn't break great [in the Pegasus], but his second, third and fourth steps were really good, and he got [to the lead] the right way. I was pretty confident turning up the backside, but he still had some running to do. And we were just delighted with his performance. It was everything we hoped for.”

Pletcher added that Life Is Good's first post-Pegasus breeze would likely come this Friday, with his next start expected to come in the Mar. 26 G1 Dubai World Cup, and GI Pegasus World Cup Turf Invitational S. would likely be on that plane with him.

“If everything stays on course [with Life Is Good] and we go to Dubai, we're going to take him as well for the [G1] Dubai Turf,” he said. “It's the same timing as with Life Is Good, so we feel the timing's good. I feel like he came out of the Pegasus Turf even better than he went into it, so taking a shot at a race like that is worthwhile.”

The conversation turned to a potential third, synthetic surface potentially being installed at Belmont Park as has been done at Gulfstream and whether or not that would help keep some turf horses in New York who would normally ship south during the winter months.

“To be honest with you, I I don't know what the synthetic would do there, and one of the things that we're sort of learning during this [Gulfstream] meet is which horses handle the Tapeta and which ones don't,” Pletcher said. “And I haven't been able to do it without actually running them on it. We've had several horses that have won Tapeta races that were off the turf who were coming off turf wins and they handled it fine. We had a couple other ones that were coming off good turf races that we ran on the Tapeta, and you can tell in the first 100 yards that they hated it. So that was one of the things that was difficult for us before [with synthetic tracks]. I can think of an example at Keeneland. Years ago, we had a filly named Wait A While who was a top class turf mare. She worked at Keeneland on the synthetic, going a ridiculous :46 flat [half-mile], with her neck bowed, in hand the whole way. We were running in the [GI] First Lady. It rained, it came off the turf and I was like, off that breeze, I have no reservation running her at all. But that afternoon, she never tightened the bridle. She hated it. So it's a little bit tricky to get a line on [the track] without running on it. So could it keep some turf horses in New York? Possibly, yeah I think it could, and then it would just be a matter of seeing if they actually took to it.”

Elsewhere on the show, which is also sponsored by Coolmore, West Point Thoroughbreds, the Pennsylvania Horse Breeders Association, XBTV and Legacy Bloodstock, the writers discussed the ongoing silence over hearings to adjudicate to the 2021 GI Kentucky Derby, Jonathon Kinchen's suspension from the NHC Tour and Thursday night's Eclipse Awards. Click here to watch the podcast; click here for the audio-only version or find it on Apple Podcasts or Spotify.