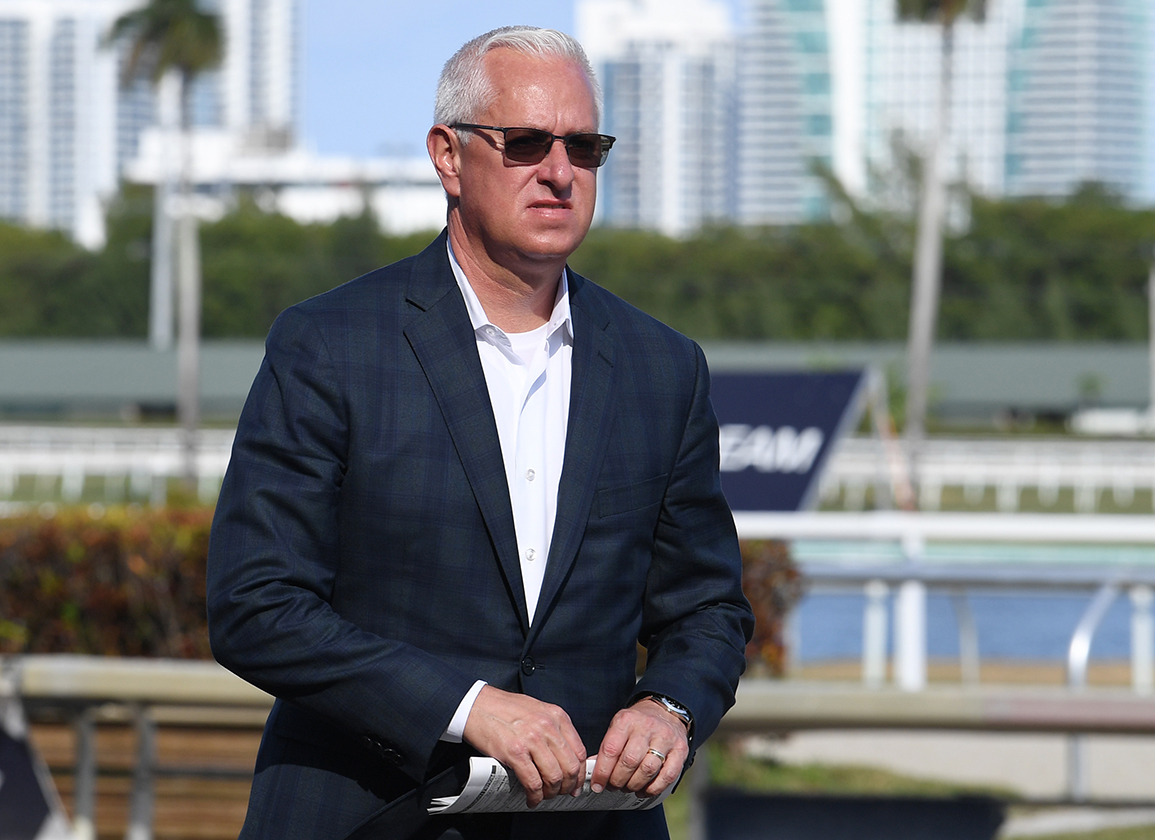 With less than three months remaining before the running of the GI Kentucky Derby, trainer Todd Pletcher, with 42 horses nominated to the Triple Crown, will be active in a number of Derby preps as he prepares his troops for his annual invasion of Churchill Downs. Pletcher divulged his plans during this week's TDN Writers' Room podcast, which will be available Wednesday afternoon.

Despite finishing third as the favorite in last Saturday's GIII Holy Bull S. at Gulfstream, Mo Donegal (Uncle Mo) may represent Pletcher's best chance of winning a third Kentucky Derby. His main target will be the GII Wood Memorial at Aqueduct Apr. 9. It has yet to be decided if Mo Donegal, the winner of last year's GII Remsen S., will have another race before that.

“We know he likes Aqueduct, so the Wood Memorial is a logical spot for him,” Pletcher said. “I spoke to [owner] Jerry Crawford Monday and we're sort of weighing our options and going to wait and see how he trains before we decide if he's going to have a prep race in between now and the Wood Memorial. The Wood Memorial is the 100-point race that we've got him targeted for since he won the Remsen at Aqueduct. I actually thought he ran a sneaky good race the other day [in the Holy Bull]. He was making up some ground late. It's just that everything kind of unfolded the wrong way for him and it took him a while to get out in the clear and able to make his run. It was the kind of effort we were hoping for, even though it wasn't the result we were wanting.”

Pletcher has some up-and-comers to keep an eye on, particularly in Emmanuel (More Than Ready). After breaking his maiden at Gulfstream, he won a Jan. 30 allowance at Tampa Bay Downs.

“Emmanuel really liked Gulfstream in his debut and feel like if we're able to continue moving forward the [GI Curlin] Florida Derby could be a potential final prep for him,” the trainer said. “Emmanuel is definitely one that we're pretty high on. He's no longer under the radar, even though he's only had a maiden win and a win at Tampa. Right now, we have him pointed for the [GII Fasig-Tipton] Fountain of Youth.”

So far as why he sent Emmanuel to Tampa for what looked on paper like a soft spot, Pletcher said he's had a lot of success with the 3-year-olds he has prepped at that track.

“Part of the strategy was trying to get him around two turns,” he said. “We've been able to accomplish that at Tampa over the years and we've had pretty good luck going there. Both Super Saver and Always Dreaming ran races at Tampa before they won their Derbies. We've had a number of horses that have gone through there that have gone on to do well. It's a good place to leg a horse up and it's a safe track. Getting some two-turn experience there is key.”

Pioneer of Medina (Pioneerof the Nile) was last seen winning an allowance race at Fair Grounds and before that he broke his maiden at Tampa Bay Downs. He will soon be back on his way to New Orleans to run in the Feb. 19 GII Risen Star S.

Since he hasn't run since a win in the Sept. 18 GIII Iroquois S. at Churchill Downs, Major General (Constitution) has flown under the radar this year, but Pletcher said he is nearing his return. Pletcher said he will most likely start next in the Mar. 12 GII Lambholm South Tampa Bay Derby.

So far as nominating so many horses to the Triple Crown, Pletcher said he doesn't look at just the Derby but at the GI Preakness S. and the GI Belmont S. as well.

“We do these nominations for the Triple Crown,” he said. “You're doing it for all three races and the Belmont is not until the first Saturday in June. That's a long way away and we like to keep all of our options open. Some of these horses might not be Derby or Preakness horses, but we feel like we could sneak up on the Belmont if they were able to win a maiden and then go to a race like the Peter Pan. The 42 number is probably a little bit misleading when you think of it in terms of Derby prospects.”