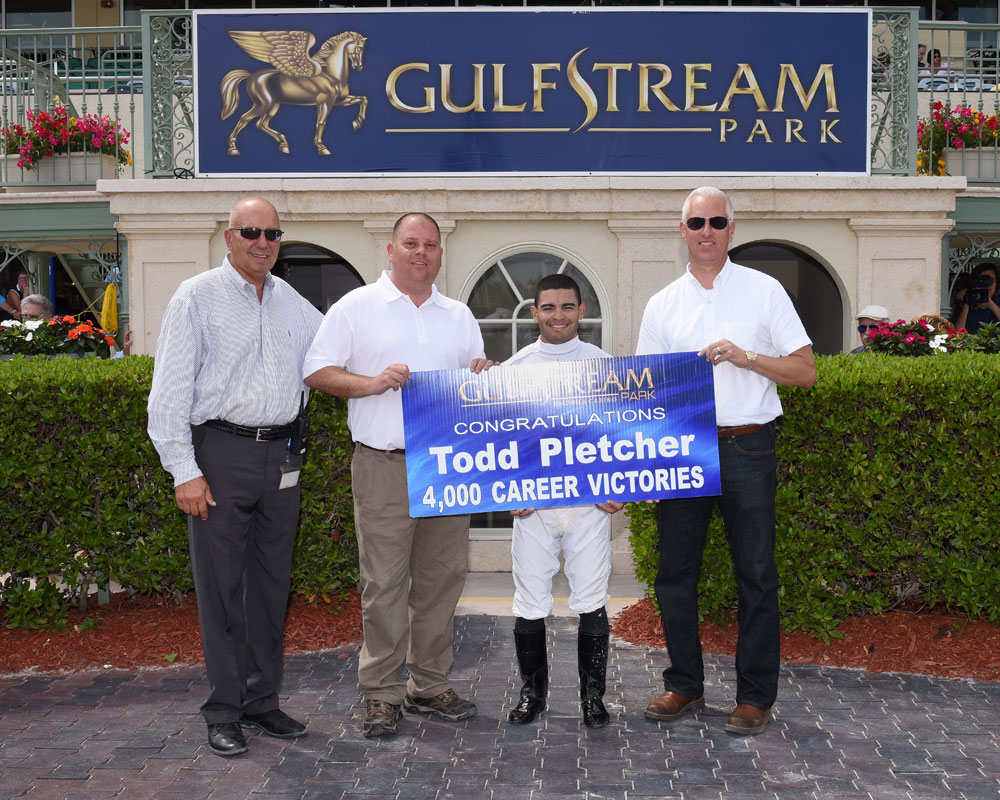 Todd Pletcher is beginning to put the pieces of the puzzle together and now has tentative plans for his major 3-year-old colts who are being pointed for the GI Kentucky Derby.

Though GII Fountain of Youth S. runner-up Zulu (Bernardini) would pick up a $1-million bonus courtesy Fasig-Tipton if he were to win Saturday's GI Xpressbet.com Florida Derby, Pletcher confirmed that he will pass the Gulfstream race. He does not want to run his horse against the top two in the division, Mohaymen (Tapit) and Nyquist (Uncle Mo), at least not at this point. Instead, he will point Zulu to either the GI Blue Grass S. or the GI Wood Memorial, with the Blue Grass appearing to be the more likely choice.

Outwork (Uncle Mo), the runner-up in the GII Lambholm South Tampa Bay Derby, is also being considered for the Wood at Aqueduct and the Blue Grass at Keeneland. Because owner Mike Repole prefers to run his horses in New York, the Wood would seem like the more logical spot, but Pletcher said there are other factors to consider.

“Usually, with Mike's horses it would be we're going to New York, period,” Pletcher said. “In this particular case he's being more open minded. Outwork is a son of Uncle Mo and the focus is trying to win a Grade I with him and trying to take him to the best possible spot to do that. You don't want to over think these things, but the horse did win at Keeneland last year, so he got a race over the track. We know he handles it. Granted, it was only a 4 1/2-furlong race, but he did do it. Those things are in play. I would say, however, things are tilted toward him running at Aqueduct. And I would like to keep Outwork and Zulu apart.”

Pletcher's third big gun is Destin (Giant's Causeway), who was last seen winning the Tampa Bay Derby Mar. 12. Pletcher said one distinct possibility is that the colt will not have another prep for the Derby.

“The ownership is on board with that,” Pletcher said of the possibility of passing the next round of Derby preps. “[Owner] Steve Davison is a big Ragozin guy and the horse made a big move forward in the Tampa Bay Derby. I know that when it comes to the Derby, not too many people have tried this approach. But, generally, giving horses plenty of time between races has worked well for our stable. Liam's Map (Unbridled's Song) and Stopchargingmaria (Tale of the Cat) winning Breeders' Cup races off layoffs are examples of that. It something we are thinking about.”

Pletcher said that should Destin run again between now and the Kentucky Derby, it would be in either the Blue Grass or the GI Arkansas Derby.

The trainer said he will have a better idea about where he is going with his “Big Three” after their next works. All three will work on either Friday or Saturday.

As for other 3-year-olds in his barn, Cards of Stone (Bustin Stones) could go in the Wood Memorial and Donegal Moon (Malibu Moon) is a Blue Grass possibility.

Pletcher may not have the strongest group he's ever had heading into the Derby, but his prospects appear much better than they did around the first of the year when it seemed like he didn't have a single top 3-year-old male in his barn.

“Going into the winter it didn't look like we were loaded with the typical type of 2-year-old group we usually have,” the trainer admitted. “We went to Palm Beach Downs thinking we were probably behind schedule with most of the promising 2-year-olds that were about to turn three. The ones that had run hadn't quite stepped up to that level. Destin is one we thought could step up and he certainly has. Outwork was just coming back and has accomplished as much as one could in that short amount of time and Zulu had just broken his maiden. It's been fun to see some of those horses come around and step up. It's always interesting…sometimes the worst thing you can have is a hot hand in January. We are pleased with the progress a lot of them have made and that we're now targeting a lot of these big preps. Still, there's a long way to go.”