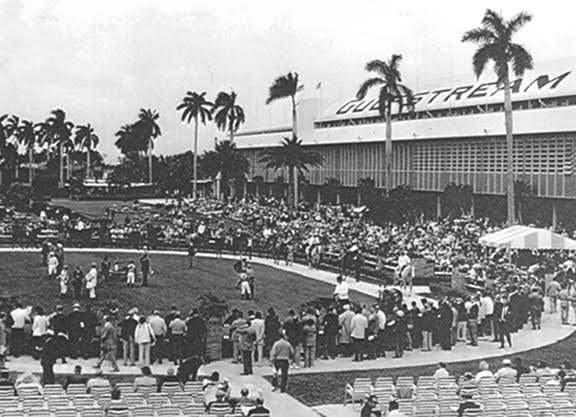 It was 1955, and Gulfstream Park was hitting its best stride. Rescued from insolvency just over a decade earlier by successful Scottish-born florist and entrepreneur James Donn, the beautifully landscaped South Florida racetrack steadily grew in popularity, routinely attracting record crowds for increasingly glamorous racing events–none more so than the Florida Derby.

The Mar. 26, 1955 running of the race christened the “Run for the Orchids”–a derivative of the storied “Run for the Roses” held at Churchill Downs six weeks later–featured Nashua, champion juvenile colt of 1954 and the de facto division leader after a win in the Flamingo S. at nearby Hialeah Park to begin his 3-year-old season. While much excitement surrounded the appearance and eventual victory of the celebrated colt, the festivities planned by Donn and his chief of staff Horace Wade extended far beyond the race itself.

In his coverage of the event for Sports Illustrated–which was in its first year of publication–horse racing editor Whitney Tower observed: “Florida Derby Day at Gulfstream was not entirely Nashua's day. More properly, it might have been called Carnival Day, for probably no race in history has been preceded by more fanfare, buildup and pre-race festivities. Gulfstream opened its gates at 9 a.m., more than four hours before the first race and almost eight hours before the Derby itself…There was music from a dance orchestra and from the University of Miami band…a parade of state flags, trick riding exhibitions, baton twirling and…water skiing on the infield lake where tiny multicolored sailboats puffed lazily about. All this gaiety at Gulfstream's biggest day…is the product of the imagination, ambition and energy of two men who have built Gulfstream into one of America's premier race tracks.” 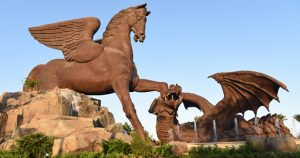 Sound familiar? Every racetracker knows that present day Gulfstream Park, a sun-drenched winter destination in the world of Thoroughbred racing, possesses a flare for the dramatic. Now in the hands of The Stronach Group, the Hallandale Beach oval features a 110-foot tall bronze Pegasus statue, a casino, a myriad of shopping and dining options and is poised to host its newly created $12-million GI Pegasus World Cup Invitational, the richest horse race in the world. While the Pegasus is unarguably a novel event, it is, in many ways, the logical extension of a longstanding tradition–one dating back to the 1940s–of pageantry and innovation at Gulfstream Park.

'Donn' of a New Beginning

Quite literally, the Pegasus–or Gulfstream as we know it–would not exist without the ingenuity of James Donn, Sr., who initially became associated with racetracks in South Florida as a landscaper. While Gulfstream opened with a roar on Feb. 1, 1939, attracting a robust crowd of 18,000 with local businesses closing for the occasion, the track failed to secure sufficient funding for the following cards and closed after only four days of operation. Even as the Gulfstream property sat empty and inoperative for four subsequent years, many continued to observe that the track had the potential to be an important destination on the calendars for sportsmen across the country.

“People come to Miami for sports [and] not as many would have come if they thought there would be no racing,” noted Allen T. Simmons, a well-heeled racing supporter and radio station operator from Akron, Ohio, in a 1943 article in the Daytona Beach Morning Journal. “Gulfstream Park is a fine plant.”

Donn recognized that potential sooner and more shrewdly than others, acquiring a majority interest in the track in 1943 and immediately acting to spruce up the facility ahead of the 1944 racing season. With a focus on developing the track as a destination for racetrack stalwarts and weekend thrill-seekers alike by pairing racing events with complementary festivities, Gulfstream experienced steady growth under Donn's stewardship. 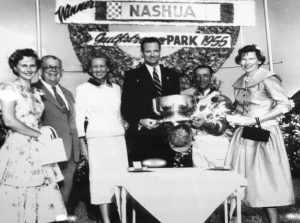 James Donn Sr. (second from left) on hand at the 1955 Florida Derby | Horsephotos

A December 1945 Associated Press report in the New York Times captured the disposition of the crowd and the flow of dollars-and-cents on yet another record-breaking day at the seaside track: “In a carnival mood, the racegoers poured $805,866 through the pari-mutuel windows on the nine-race card, nearly doubling the previous high of $409,209 set a year ago.”

During the 1950s, Donn and Wade continued to employ creative strategies to cultivate fans of the sport, including contests in which random patrons were selected as “temporary owners,” allowing racegoers to experience the thrill of watching a horse run under their own name. Without question, in the years before his death in 1972, Donn steered Gulfstream using many of the marketing and managerial principles that still guide the track today. In addition to creating Florida's first $100,000 stakes race in the 1953 Florida Derby–and bolstering its commercial appeal with a circus-like atmosphere described as “racing's greatest extravaganza”–Donn installed a cutting-edge clubhouse and introduced 10-race cards, packing as much racing action as possible into Florida's relatively extensive southern-latitude daylight hours. In 1968, Gulfstream continued to be at the fore of entertainment innovation, hosting the Miami Pop Festival–one of the first large-scale outdoor music festivals in American history. The event, which took place on the track's infield, was highlighted by a performance by Jimi Hendrix and served as a precursor to the fabled Woodstock festival, which took place in upstate New York the following year.

While Gulfstream undeniably flourished during Donn's tenure at the helm, the broad history of the track must be painted against the unvarying backdrop of a battle to establish itself as the premier racing venue in South Florida. Facing stiff competition from Hialeah and Tropical Park closer to the Miami city center, the Hallandale track spent roughly 25 years stating its case in the Florida legislature to secure its share of racing dates during the January-to-April high tourist season, something that became a reality in 1972–ironically, the year of Donn's death. With the favorable realignment of dates on the racing calendar, new Gulfstream president James Donn, Jr. was able to market his father's extravagant event concept to a distinctively new pool of well-heeled customers in addition to mainstay Floridians.

Gulfstream's innovations and success during the Donn years played a major role in its eventual propulsion to the top of the Florida racing heap. Never dull and ever-changing, the ensuing decades saw Gulfstream adapt and build upon time-tested strategies to appeal to the sensibilities of new generations of racegoers.

From the Breeders' Cup to the Pegasus

In 1989, just one year before the Donn Family sold Gulfstream Park to Bertram Firestone, the track hosted its first of three Breeders' Cups, a well-matched marriage between racing's increasingly significant World Championships and a venue with a proven ability to shine on the grandest stage. Over 51,000 packed the building to witness the fourth and final meeting between rivals Sunday Silence and Easy Goer in the GI Classic, with the latter emerging victorious by a neck on the wire.

Six years later, Gulfstream played host to a coming out party of sorts for Hall of Famer Cigar, who prevailed in his first of two GI Donn Handicaps as part of a stunning 16-race win streak. The race was captured by three champions and two Hall of Famers in subsequent years before being re-appropriated for the Pegasus World Cup in 2017.

As the Pegasus nears, it is safe to say that its soon-to-be-written story will serve as the latest chapter in Gulfstream's rich history and a fitting sequel to the track's status as an innovation center over the past 70 years. Although the Donn Family is no longer nominally attached to the 1 1/8-mile Grade I event–and high-divers and racing elephants have been replaced by UFC champion Conor McGregor and a colossal Pegasus statue at the all-encompassing entertainment venue–Saturday's event is unmistakably cast in the simultaneously pioneering and traditional mold of Jimmy Donn's Gulfstream Park. Just as Nashua was the racing attraction on a day packed with festivities at the 1955 Florida Derby, the anticipation of a showdown between handicap stars Arrogate (Unbridled's Song) and California Chrome (Lucky Pulpit) anchors a high-end celebration of the sport at its pinnacle in the 2017 Pegasus World Cup.