Pivotal’s Addeybb On Top In the Champion 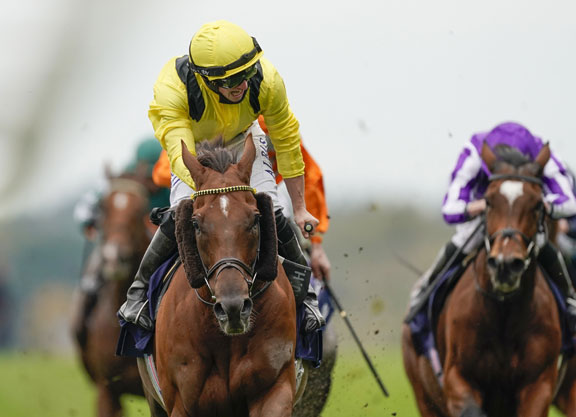 All day long at Ascot, it was a case of deep-ground lovers need only apply and one who certainly fit that category was Addeybb (Ire) (Pivotal {GB}) and he duly carried off the feature G1 QIPCO Champion S. Going through the conditions with an ease his rivals could not match, last year’s runner-up finally registered a first top-level success in his native country having annexed the G1 Ranvet S. and G1 Queen Elizabeth S. during a Spring campaign in Australia. Well-positioned in second by Tom Marquand throughout the early stages, Sheikh Ahmed Al Maktoum’s 9-1 shot was committed two from home and saw off Skalleti (Fr) (Kendargent {Fr}) to score by 2 1/4 lengths, with the 15-8 favourite Magical (Ire) (Galileo {Ire}) battling into third, half a length away. On a day when his partner Hollie Doyle made the headlines, Marquand was grabbing his own share but was quick to heap praise elsewhere. “What a credit to Safid [Alam], William and Maureen and the whole team at home. He’s gone to Australia, he conquered down under and now he’s come back up and he deserved that group one so much,” he said. “All he’s done is knock on the door, show he’s a champion and he’s never got his real swansong but today’s he’s got it.”

It has been a long voyage to star of the show at this prestigious meeting for Addeybb, who at one point in his career was labelled unlucky for failing to get his favoured easy conditions on several occasions. Kept in training and carefully nurtured by William Haggas, he proved that if you hang around long enough you can have things fall into place and they did this time with the track unraceable a fortnight ago. During the summer, the veteran had been rested but had shown enough when defying a seven-pound penalty in the Listed Doonside Cup on his return over this trip at Ayr Sept. 19 to confirm that he was very much a player here. Twelve months ago, the ground had not been bad enough for him to get past Magical but on this occasion he had first run on the mare who clearly struggled in the conditions.

With the sluggish-starting G1 Epsom Derby hero Serpentine (Ire) (Galileo {Ire}) soon rousted along to take the lead, the widest-drawn Addeybb was granted a perfect lead with the July 5 G1 Prix du Jockey Club hero Mishriff (Ire) (Make Believe {GB}) too fresh in behind. “PCB” had Skalleti positioned alongside that Gosden runner after Ryan Moore had worked to get last year’s heroine into a challenging position in fifth. Turning for home, Tom Marquand had threats on either side but as soon as he pushed the button at the two-furlong pole the contest was decided with only the similarly ground-dependant Skalleti and the race’s class act Magical able to give meaningful pursuit. “He travelled like a true good horse throughout the race and to be honest when I started getting going, I just bombed the straight,” Marquand explained. “It’s remarkable, I’ve never ridden a horse like him. He goes over ground that’s as bad as you can get and he makes it feel like you are on quick ground. That’s why he’s so good on it.”

Addeybb, who first came to prominence when beating fellow social climber Lord Glitters (Fr) (Whipper) in the Lincoln H. over Doncaster’s straight mile in March 2018, looked to be going places fast when adding the following month’s G2 Sandown Mile to his tally. Denied a fair crack at this level due to drying ground thereafter, it was not until June 2019 that he enjoyed another slice of fortune when taking a competitive renewal of the course-and-distance Listed Wolferton S. at the Royal meeting. Winning the G3 Rose of Lancaster S. on heavy ground at Haydock before beating all bar Magical in this, the bay went to Australia and connections were rewarded for their enterprise as he gave four pounds to Verry Elleegant (NZ) (Zed {NZ})–since the winner of three group 1 races including Saturday’s Caulfield Cup–in both Rosehill’s Ranvet Mar. 21 and the Queen Elizabeth at Randwick Apr. 11. On the latter occasion, when the ground had deepened, he put 2 3/4 lengths between himself and that filly but it was officially “good” as he trailed Lord North (Ire) (Dubawi {Ire}) when second in the June 17 G1 Prince of Wales’s S.

William Haggas said, “He has been absolutely fantastic. Since he won the Wolferton last year and we put the cheek-pieces on, he has just been so consistent. He was really on it today. He looked fantastic beforehand, we thought, but he was grumpy and difficult to saddle, which is a good sign for him. He has got such a marvellous nature and this is tailor-made for him. We all know that he loves this ground. We have finally won a championship race with such a good horse.”
Pondering the winner’s journey, he added, “I said after six-year-old One Master won the Foret for a third time that, if you can keep them happy, sound and not abuse them when they are young they will reward you when they are older. This is exactly what he has done. Look at today–the first winner was six, the second winner was six–if they are sound, healthy and keep their enthusiasm, which he has done, then they can enjoy life. I think that was his best ever performance at the age of six.”

“He is great at home and Safid, who rides him every day, said this morning that he would win and that he was really on form. I have been not very well for a bit and then have been at the sales when I have been better, so I have hardly seen him. I have seen him at first lot but that is it really, so all credit to my team at home and to Safid in particular, who dotes on this horse. I think he is looking for another couple of months in Australia next spring! If we can get back there, we will obviously consider it. We also might consider Saudi Arabia as well, which is dirt but that dirt track is terrific and possibly worth a short.”