Pioneerof the Nile Filly Stalks And Pounces in Churchill Bow 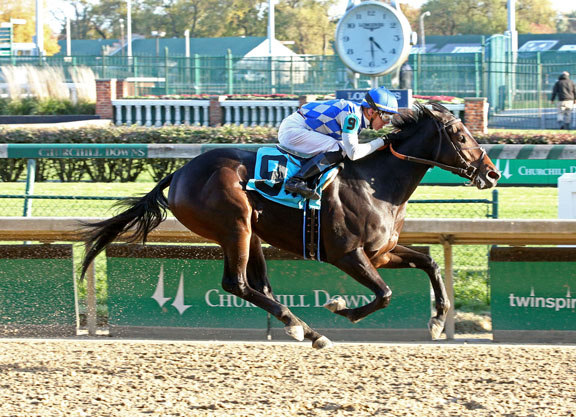 8th-Churchill Downs, $92,756, Msw, 11-9, 2yo, f, 6f, 1:11.20, ft.
HALAMA (f, 2, Pioneerof the Nile–Milania, by Bernardini) out-slugged her two chief rivals in the market to open her account at first asking Saturday at Churchill. Drawn widest of the seven remaining runners after the scratch of would-be chalk Further Lane (Lea), the $200,000 Fasig-Tipton October acquisition landed in midfield through the opening exchanges before working her way up into a three-deep third, as favored Weekend Fun (More Than Ready) cut out the running from 2-1 second choice Speighty Shirl (Speightstown). Those three stretched across the track at the top of the lane and raced heads apart into the final eighth of a mile before Halama asserted a sixteenth out en route to a two-length score. Weekend Fun boxed on gamely at the fence to hold second from Speighty Shirl in a WinStar-sired trifecta. Halama was acquired in utero for $310,000 at Keeneland November in 2016 and is out of a winning daughter of Keeper Hill (Deputy Minister), victorious in the 1998 GI Kentucky Oaks beneath the Twin Spires and later the dam of Mill Ridge stallion Keep Up (Unbridled's Song). Keeper Hill was a half-sister to the good sprinter Golden Gear (Gulch), who also stood for a time at Mill Ridge. Halama, out of a Bernardini mare like her Grade I-winning stablemate Maxfield (Street Sense), is a half-sister to a Curlin filly who made $200,000 at KEENOV earlier this week. Milania visited Justify this term. Sales history: $125,000 Wlg '17 KEENOV; $90,000 RNA Ylg '18 KEESEP; $200,000 Ylg '18 FTKOCT. Lifetime Record: 1-1-0-0, $54,412. Click for the Equibase.com chart or VIDEO, sponsored by Fasig-Tipton.
O-Wayne Sanders & Larry Hirsch; B-Buscar Stables, Inc (KY); T-Brendan P. Walsh.