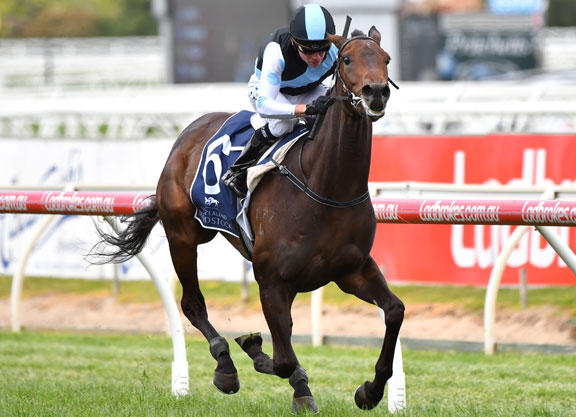 Ultimately loaded into barrier 15 following the scratching of the race's four emergency runners, Pinot was off to an uneventful beginning, but was four and five wide for the opening three furlongs before finally crossing over to the fence to head them off. Allowed to gallop along through even sections down the side of the track, the A$200,000 acquisition was asked to quicken by Stephen Baster with about 500m to travel and the pair opened some daylight at the entrance to the straight. A bit wobbly-legged and wanting to drift in at the furlong grounds, Pinot began looking for the line, but had the race in safe keeping and took it by 1 3/4 lengths as the $5.50 (9-2) joint-favourite (video). Rimraam (NZ) (Commands {Aus}) was second, a length better than Hiyaam (NZ) (High Chaparral {Ire}) in third. The final time over a track rated a good 3 was 2:02.71.

“It was really good to see her do that,” Eclipse's Aron Wellman told the TDN Saturday afternoon en route to the races at Santa Anita. “[The wide draw] was certainly my biggest concern going into the race. But [trainer] Gai [Waterhouse] is the self-proclaimed most optimistic human being and she was unconcerned, because the filly was doing so well. The ground and the distance were concerns, but she dispelled of those concerns, much to our delight.

He continued, “The first quarter mile won the race and Stephen [Baster] gets all the credit for that, it was absolutely brilliant. The way he gradually allowed her to get to the lead as opposed to sending her too abruptly–that probably would have done her in right there and then and she probably wouldn't have found that extra. His ride was a thing of beauty and he deserves credit for the win.”

Pinot–whose dam Dizelle (NZ) (Zabeel {NZ}) was herself a winner of an Oaks–will need to negotiate an extra 500m, but Wellman and team are not the least bit worried.

“The one thing that we have always been very confident with this filly is her endurance and stamina to get the Oaks distance,” he said. “It looked for a minute that she was looking for the wire, but they really weren't gaining on her all that much. Her stride remained fluid and she never lost her action, she was really reaching out at the wire. But her ability to get the distance is one of the least of our concerns. We're all pretty bullish on going to Melbourne with a live chance in the Oaks.”

And Wellman, who will likely make the trip to Victoria after attending the Breeders' Cup the prior weekend, welcomes the opportunity to give the legendary Waterhouse her first win in the prestigious event.

“She's been spot on about this filly all season long, she's made every right move,” he said. “Her mission going back the last few months was to have Pinot primed for a peak performance in the Oaks and hopefully that's what she's accomplished. To win a race like the Oaks would be a great honour and for it to be Gai's first Oaks, that would just amplify the experience. If it weren't for her, we wouldn't have taken the plunge. She deserves all the credit for putting us in this position.”

Kate Waterhouse is also a partner in the filly along with Newgate Farm and bloodstock agent James Bester.