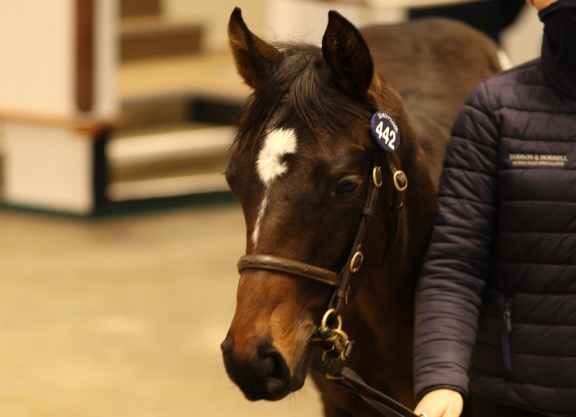 NEWMARKET, UK—The popularity of first-season sires is no new phenomenon but it is a feature of the market which apparently gains more and more traction, and three freshmen were responsible for four of the top ten lots as pinhookers wasted no time in assembling their prospective yearling drafts for next season.

The first session traditionally represents a quieter start to the four-day auction, which builds towards the better pedigrees on Friday. With shorter sessions throughout the sale this year, there were 135 foals sold on Wednesday, compared to 168 on the same day last year, meaning that the aggregate of 1,585,100gns, which was down by just 7%, actually represented an improved performance from 2019. Indeed, both the average and median were up, by 16% and 60% respectively, at 11,741gns and 8,000gns, while the clearance rate of 67% was just one point lower.

Selwood Out In Front
The established names of Iffraaj (GB) and Oasis Dream (GB) led the session when consecutive colts from James Read's Selwood Bloodstock sold for 57,000gns and 50,000gns respectively.

Anita Wigan bred this year's G2 Coventry S. winner Nando Parrado (GB) (Kodiac {GB}) and is also responsible for the Iffraaj colt (lot 442), a son of the dual-winning Shamardal mare Soryah (Ire) whom she bought from the Godolphin draft at last year's December Sale for 18,000gns. The session-topper was bought by Ross Doyle on behalf of the Morrin family's Pier House Stud.

“He is a good-looking horse out of a Shamardal mare and by a top stallion,” said Doyle, who added that the colt would likely return to neat year's October Sale.

The next lot into the ring (443) was prepared by Read for his breeder Lady Hardy and is a half-brother to treble winner Stylianekkos (GB) (Kyllachy {GB}). By Oasis Dream, he was the selection of Flash Conroy of Glenvale Stud at 50,000gns.

With three foals sold for an average of 39,000gns, Selwood Bloodstock was the leading consignor on day one.

Iffraaj was also on the list of another accomplished pinhooker, Paul McCartan, who bought the most expensive filly of the session, his daughter out of the unraced Royal Applause (GB) mare Posh Claret (GB).

Among McCartan's recent foal purchases is the aforementioned Nando Parrado, and the Ballyphilip Stud owner went to 40,000gns for lot 402, whose half-sister, a yearling filly by Ardad (Ire), is heading into training with Archie Watson.

“I haven't had many foals by [Iffraaj], but I have a mare by him and she is the dam of Imperial Force, who was third in the Norfolk Stakes. He is a good sire and he gets a good filly,” said McCartan, who is also the breeder of Harry Angel (Ire), whose first foals are selling this week.

National Treasure
No fewer than 24 stallions are represented by members of their first crops at Tattersalls this week and it was the National Stud's G2 Coventry S. winner Rajasinghe (Ire) who led the way during the opening session.

A colt bred in Devon by Richard Tucker and offered through the National Stud was the pick of Jimmy Murphy of Redpender Stud, whose final bid brought the hammer down at 46,000gns.

Rajasinghe's first foal through the ring had been one of the early leaders of the day when knocked down to agent Larry Stratton at 37,000gns. Sold by Whitwell Bloodstock on behalf of breeder Alice Walton, lot 256 is out of the unraced Lucia De Medici (GB) (Medicean {GB}), herself a daughter of the listed Middleton S. Winner Jalousie (Ire) (Barathea {Ire}).

“Rajasinghe is a horse I have always followed since he won the Coventry Stakes because I bred the runner-up, Headway (GB), in a partnership,” said Stratton. “Rajasinghe's sire Choisir (Aus) is a good influence. This is a nice colt who has been bought for a partnership and is for resale.”

Rajasinghe stood his first two seasons at £5,000 and has had his fee cut to £3,000 for 2021. He has six foals for sale this week, with the first three sold having returned an average of 30,667gns, making him the leading first-season sire at the sale after the first day.

Fitzpatrick, an accomplished pinhooker through his Kilminfoyle House Stud, said, “This is a quality, attractive foal. He is from a good breeder, and is one of the few today who is a half-brother to two stakes horses. He has a nice back pedigree, too, and will be back for resale.”

Dukes Stud often has a stand-out foal or two during the Saturday session, but Wyatt explained that in this unusual year it was “time to mix it up a little bit”.

He said, “Saturday has always been good to me but I felt it was the year for a change. [The colt] has been a lovely foal throughout. I think he is good representative for the sire, I have seen a few of them, they look nice sorts.”

A Sixties Hit
Standing for just £1,000 in 2021 on pay-up-front terms, Sixties Icon (GB) has to be one of the best-value stallions in Britain and his sole representative in the foal sale, a colt out of the G1 Moyglare Stud S runner-up Silca Chiave (GB) (Pivotal {GB}), hit the first-day leader-board when selling for 42,000gns.

Offered by Norman Court Stud, which is co-owned by Mick Channon and is also home to Sixties Icon, the colt (472) is a half-brother to the listed-placed Strictly Silca (GB) (Danehill Dancer {Ire}) and was bought by John Troy.  His dam's illustrious siblings include the full-sisters Golden Silca (GB) (Inchinor {GB}), whose eight victories include the G2 Mill Reef S., and G1 Prix Morny winner Silca's Sister (GB).

Bearstone Rookie
Terry and Margaret Holdcroft of Bearstone Stud have enjoyed a terrific season on the racecourse with their GI Breeders' Cup Turf Sprint heroine Glass Slippers (GB) (Dream Ahead) and a colt from her family by the stud's recent stallion recruit, Washington DC (Ire), featured among the day's leaders.

Offered as lot 320, the colt's dam is the unraced She Mystifies (GB) is a daughter of the stud's former resident Indesatchel (Ire) and a half-sister to Glass Slippers, who is now a treble Group/Grade 1 winner. Another half-sibling is the listed Radley S. winner Electric Feel (GB), who is also by a former Bearstone stallion, in this case Firebreak (GB).

Sold to Y&R Engineering, whose bids were taken over the phone by Tattersalls' marketing manager Jason Singh, the colt fetched 35,000gns.

The December Foal Sale continues on Thursday at 10am, an hour earlier than the published time.