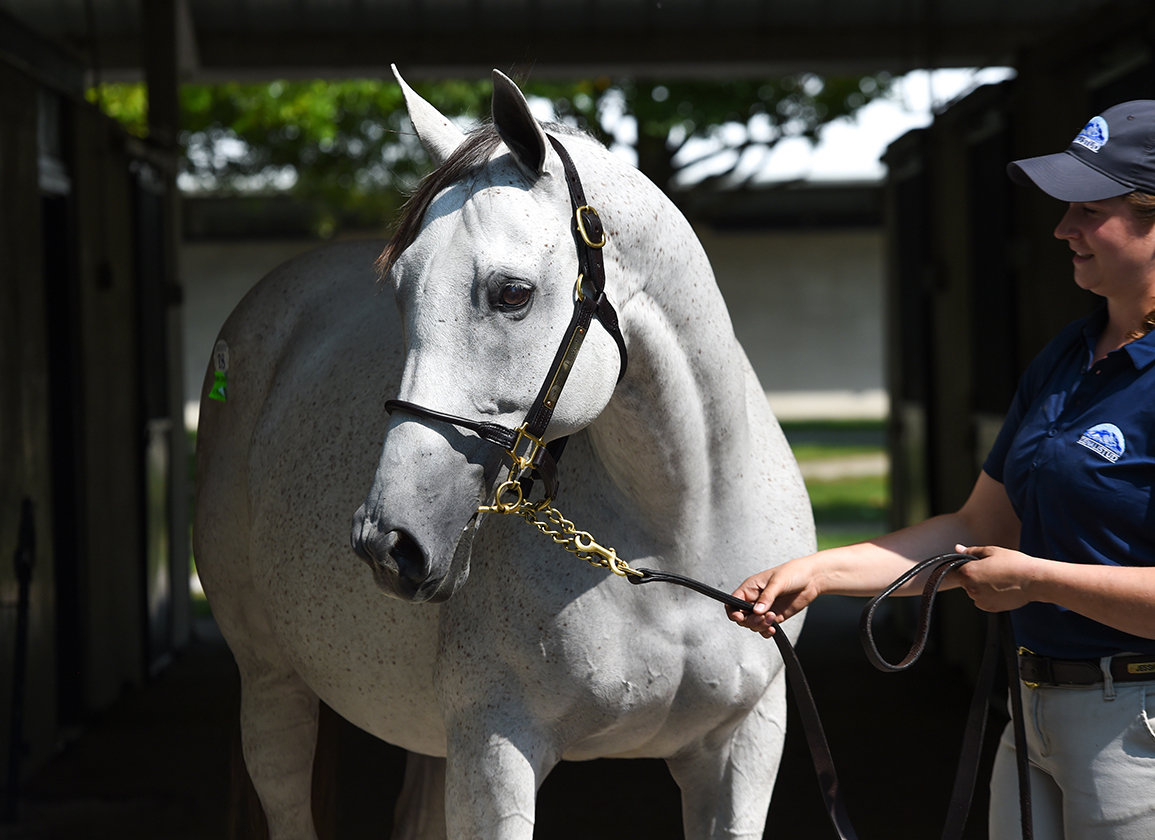 LEXINGTON, KY – A large group of interested parties turned out at Fasig-Tipton as an offering of 23 mares and foals from the dispersal of Josephine Abercrombie's historic Pin Oak Stud went through the sales ring Sunday evening at Newtown Paddocks. Bloodstock agent Lincoln Collins, bidding on behalf of John and Susan Sykes's Woodford Thoroughbreds, made the evening's highest bid when going to $650,000 to acquire multiple graded stakes winner Don't Leave Me (Lemon Drop Kid) (hip 18). The 9-year-old mare sold in foal to 2020 Horse of the Year Authentic.

“We were very pleased by the reception,” said Craig Bandoroff, whose Denali Stud handled the consignment. “We started showing Saturday morning and they were here at 7:45. We had 23 horses show 1,056 times. Broodmares don't do that. Foals do that. We were hoping that the community would appreciate the quality of the offerings and the quality of Mrs. Abercrombie and Clifford [Barry]'s lifetime work. And they did.”

Barry, who has served as Abercrombie's farm manager for over 30 years, agreed the evening was bittersweet.

“This has been Mrs. Abercrombie's baby for 60-plus years,” Barry said at the close of the auction Sunday. “It's kind of nice to come in here tonight and showcase the last part of it and make something happen and make a legacy. There are some mares in here that she's had for three and four generations. I'm very, very proud for her and a I have a debt of gratitude myself. I've been on pretty much a magic carpet ride for 35 years. I'm very proud of my staff. It came together very quickly. It was a pretty tough day when we told them what we were going to do. Friday was a tougher day putting those mares on the trailer. I won't deny it.”

Both Barry and Bandoroff gave credit to Fasig-Tipton for putting together an unorthodox bloodstock sale.

“I want to take my hat off to Fasig-Tipton,” Bandoroff said. “It was their idea to do this. I was somewhat skeptical–it was out of the box, but Boyd [Browning] and Bayne [Welker] and Clifford said we could do it. And this sales company is unbelievable. They try hard and the answer is never no. The answer might be let me think about it, but it's always yes.”

Welker added, “We thought all along that we could do a stand-up sale to shine the light on the achievements of Mrs. Abercrombie and Pin Oak and what it's done over the years. We thought the consignment and the horses would take care of themselves. And they certainly did.”

Don't Leave Me, winner of the GIII Ontario Colleen S. and GIII Bourbonette Oaks, proved the most popular of Sunday's 23 offerings. She is out of GI Selene S. winner See How She Runs (Maria's Mon). Her first foal I'm So Sorry (Uncle Mo), a $42,000 Keeneland September yearling last year, was second on debut at Saratoga Aug. 5 for trainer Brian Lynch.

“She's a lovely mare, it's the right pedigree, we like the [covering] sire,” Collins said of the 9-year-old's appeal. “As a commercial operation you have to consider that a lot of times these first-season stallions will be very popular. We have had a general upgrading program. She fit into it and Mr. Sykes was prepared to give it a go.”

Of the mare's final price tag, Collins added, “Mrs. Abercrombie is a great breeder and she's bred all kinds of good horses. You don't argue with people like her and Clifford Barry. When they've got a good one, you've got to pay up for it. It was richly deserved.”

Don't Leave Me had originally been scheduled to go through the ring before her weanling filly by Medaglia d'Oro, but after a last-minute change she followed after that dark bay youngster. Collins was underbidder on the weanling after Denali's Conrad Bandoroff signed for the filly at $370,000 on behalf of Rigney Racing.

“I was underbidder on the weanling,” Collins confirmed. “She was full of class, a beautiful mover. I hope it will end up as a beautiful yearling. If we had bought her for the client we were bidding for, that would have been to race. Inevitably if you love a foal that much, you've got to like the mare as well. In some respects, I wish that the Bandoroffs hadn't switched the order.”

Conrad Bandoroff said options for the session's top-priced weanling were up in the air.

“She is a lovely filly,” Bandoroff said. “We loved her when we saw her at the farm. She's a beautiful filly who presents you with a lot of options. There is a good chance she could end up at [Denali's] Barn 7a at Saratoga, but we will take it day by day. For now she will go back to Denali. We are thrilled to have her at the farm.”

As Bandoroff described plans for the weanling, Barry, standing nearby, jumped in to add, “I'll raise her if you want.” Bandoroff smiled and said, “I might have to take him up on that.”

“We will foal her out and we will see,” Shepherd said of plans for the mare. “Obviously we will have different plans if it's a colt or a filly. If it's a filly, you'd want to keep that family around. And if it's a colt, we will see how he develops and it could be 100% a commercial play. That's the plan as of right now.”

Hirsch, of Highlander Training Center, has a small broodmare band primarily focused on racing, according to Shepherd.

“He keeps some fillies that he races, but there is no scheme of building a big commercial broodmare band,” Shepherd said. “Our focus is on racing and if we can breed great racehorses, and in particular hopefully fillies, that would be the big picture.”

Of the dispersal dynamic, Shepherd said, “You come across good horses from great families all the time, but these were all centrally located in one spot. Dispersals tend to take on a certain mystery within themselves. And sometimes you overpay, but I think she was well worth that kind of money.”