Pier Sets Sights On The Lockinge 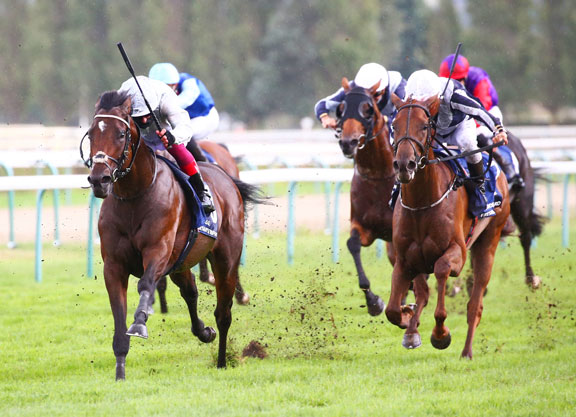 There is still a sense of the unknown where 'TDN Rising Star' Palace Pier (GB) (Kingman {GB}) is concerned, despite his already-impressive achievements, and Saturday's G1 Al Shaqab Lockinge S. at Newbury should provide more evidence as to the level of his ability. Staying on powerfully to win the G2 Sandown Mile by eight lengths on his seasonal return Apr. 23, Sheikh Hamdan bin Mohammed Al Maktoum's G1 St James's Palace S. and G1 Prix Jacques le Marois hero has slower ground to contend with here but it should be nowhere near the testing surface he hated when third in the G1 Queen Elizabeth II S. at Ascot in October. “It looks a good edition of the race and we wouldn't want to see a lot more rain,” John Gosden said. “He lost a shoe and had a slight injury in the QEII when the ground got very soft, so hopefully it's not that–it can happen at Newbury. We're pleased with him, but I have plenty of respect for the opposition. Sometimes the Lockinge can come up a little bit weak, but not this year.”

Fellow 'TDN Rising Star' Lope Y Fernandez (Ire) (Lope de Vega {Ire}) has no problem with an easier surface and now that connections have decided to stick to a mile he is at a trip that he remains relatively unexposed at. Placed in the G1 Prix Jean Prat and G1 Prix Maurice de Gheest over shorter last summer, he had just two tries at this distance in 2020 and was third in the G1 Irish 2000 Guineas at The Curragh and in the GI Breeders' Cup Mile at the start and end of his season. The manner of his comeback win in Leopardstown's Listed Heritage S. Apr. 14 suggested he had potential to improve again this term and it could be that he is only now beginning to fulfil his potential.

“The Irish Guineas was a messy race and it didn't really tell us if he was a sprinter or a miler. After that we messed around with him a bit, but in all fairness he took it well,” Aidan O'Brien explained. “At the end of it all, we decided this horse was a miler. His last run at the Breeders' Cup was good and we decided we'd get him ready for this race. He's done very well physically and mentally and has settled down.”

Two interesting improvers who have met before are Saeed Manana's Top Rank (Ire) (Dark Angel {Ire}) and Sunderland Holding's My Oberon (Ire) (Dubawi {Ire}), with the former getting the better of his peer in the G3 Superior Mile on soft ground at Haydock in September. The James Tate-trained Top Rank defied a subsequent penalty when staging a successful return in the Mar.  27 Listed Doncaster Mile, while My Oberon struck for the William Haggas stable in the nine-furlong G3 Earl of Sefton S. at Newmarket Apr. 14. James Tate said of Top Rank, “He may be five, but has not been over-raced. I'm very hopeful this season will be his peak season, so it seems like the right one to be having a go at the Lockinge. He's in good form, so we'll have a go.”

William Haggas is happy that My Oberon has the right progressive profile for the race and commented, “He seems fine. I was going to run him in the Prix d'Ispahan, but it's complicated so we're going for the Lockinge. I'm not sure he'll enjoy the ground much but nothing ventured, nothing gained. He's definitely improved. It was a good run first time out–he beat a couple of solid yardsticks. Hopefully he'll show a bit more improvement.” Another lurker is Lady Bowthorpe (GB) (Nathaniel {Ire}), whose defeat of Queen Power (Ire) (Shamardal) in the G2 Dahlia S. over an extra furlong at Newmarket May 2 looks all the better after the runner-up's subsequent romp at York on Thursday.

At Newmarket, 'TDN Rising Star' John Leeper (Ire) (Frankel {GB}) tests his Derby credentials in the 10-furlong Listed Betway Fairway S. where he meets the solid yardstick and G3 Chester Vase third Fancy Man (Ire) (Pride of Dubai {Aus}). Successful by four lengths in a Newcastle novice over this trip Apr. 30, the son of Snow Fairy (Ire) (Intikhab) is the one colt left in the fray for the blue riband who has a potential x-factor. “We thought long and hard about running him in the Dante,” trainer Ed Dunlop said. “It was a serious option, but a key factor was that we got two extra days since his last run by going to Newmarket. This is a lightly-raced horse coming out of novice company, so after looking at the options and discussing it with Mrs Patino we decided upon the Fairway S. We've also had plenty of rain here, so it's beautiful ground. It should be on the easy side of good this weekend. We think an awful lot of him. If he proves not to be good enough, there's the [G2] King Edward VII S. and other races to go for.”

Back at Newbury, the G3 Al Rayyan S.–which is registered as the Aston Park–sees Shadwell's Al Aasy (Ire) (Sea the Stars {Ire}) bid to defy a three-pound penalty for his return success in the course-and-distance G3 John Porter S. This easier ground will suit better and he has a distinct fitness edge over Juddmonte's 2019 G1 St Leger hero Logician (GB) (Frankel {GB}), who lost his unbeaten record when last of four on soft ground in York's G3 Cumberland Lodge S. in October. “Al Aasy ran very well at Newbury first time out, and William [Haggas] has been happy with him since,” Angus Gold said. “We will see how he gets on this weekend at Newbury and take it from there, but William had planned to go to the [June 4 G1] Coronation Cup.” Teddy Grimthorpe said of Logician, “We're still a bit mystified why he ran so poorly at York on his last start in the Cumberland Lodge. He checked out fine and has had a straightforward winter. I think older horses always tend to take a little bit longer to come to hand, especially a horse who has had time off. With each of his works, he's improved. He obviously had that severe peritonitis over the winter of 2019-20 and that is serious. We've always had faith in him and Prince Khalid and the family were excited about him and wanted to give him every chance. We know he's got that talent and he's in the right hands.”

Classic Doubles On The Line in Paris