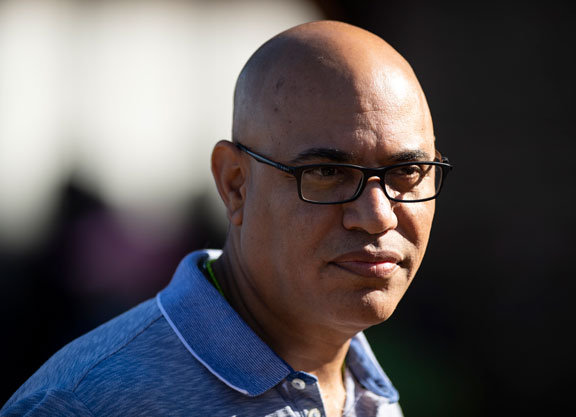 Amer Abdulaziz Salman, the founder of Phoenix Thoroughbreds, has been named as a “key figure in a major money-laundering operation” and is also alleged to have stolen €100 million from the sham cryptocurrency project he purportedly helped to run, the Racing Post has reported.

Over time, Abdulaziz then allegedly whitewashed his ill-gotten gains by buying racehorses and breeding stock for Phoenix, the global Thoroughbred ownership enterprise he launched in 2017, the Racing Post story said.

These stunning allegations were reported Nov. 24 by the Racing Post (here and here) and appear to be based in part off of live-Tweeted testimony reported by earlier this month by Inner City Press (here) from a United States federal court trial.

On Nov. 21, that federal trial in New York resulted in a guilty verdict for U.S. lawyer Mark Scott on charges of fraud and laundering $400 million in illegal funds for the global cryptocurrency entity known as OneCoin, which was created in 2014 but has since been exposed as a Ponzi-style scam that promised unsustainable returns to multiple levels of unwitting investors.

The Racing Post reported that Abdulaziz was “one of the operation's web of money-cleaners under the guidance of Gilbert Armenta, boyfriend of OneCoin's other co-founder, Dr. Ruja Ignatova.”

On Nov. 6 Inner City Press live-tweeted sworn testimony delivered by Konstantin Ignatov, the co-founder of OneCoin. The Racing Post reported that Ignatov recently pleaded guilty to his own money-laundering and fraud charges part of the estimated $4-billion scam, and has been cooperating with U.S. prosecutors. Inner City Press reported the following exchanges that TDN has condensed here for brevity:

US Attorney: Who did Gilbert Armenta work with on money laundering?

US Attorney: Who was this Mr. Aziz?

Ignatov: One of the main money launderers for [OneCoin].

US Attorney: Did you ever report to the police any of [Abdulaziz's] theft?

Ignatov: No. [Because] the money came from a criminal activity.

On Sunday evening, TDN was not able to corroborate the live-tweeted testimony against an official court transcription. TDN could also not reach Abdulaziz via phone to ask his side of the story, and a voicemail message seeking comment from Tom Ludt, the head of U.S. operations for Phoenix Thoroughbreds, was not returned in time for deadline for this article.

The Racing Post reported that it has seen “a draft transcript of the September 2018 interview between Mark Scott and FBI agents after he was arrested on suspicion of money-laundering, in which he claimed a Dubai-based investment fund named Phoenix was sent $190 million.”

The Racing Post continued: “In an interview earlier this year, Abdulaziz said he created Phoenix as an equine investment fund geared towards providing investors with a 'sustainable return realized through acquisition and breeding of top-quality Thoroughbreds' and claimed to have raised $250 million. However, Abdulaziz has never disclosed who his investors are–citing a desire to protect his client base–other than to say they are 'non-racing people.'”

The Racing Post added that “The U.S. Attorney's Office for the Southern District of New York, which prosecuted Mark Scott, declined to comment on Sunday when asked if Abdulaziz was a person of interest, while the FBI said it 'neither confirms nor denies' having an interest in the Phoenix founder.”

The Racing Post reported that Abdulaziz's bloodstock agent, Dermot Farrington, “is understood to have quit his role after becoming aware of the accusation…. Kerri Radcliffe, Abdulaziz's first bloodstock agent, was fired by him last year and he has since relied on Farrington” for helping to build what is now estimated as a 300-horse international racing and breeding operation on five continents.