Phoenix Clash One To Savour 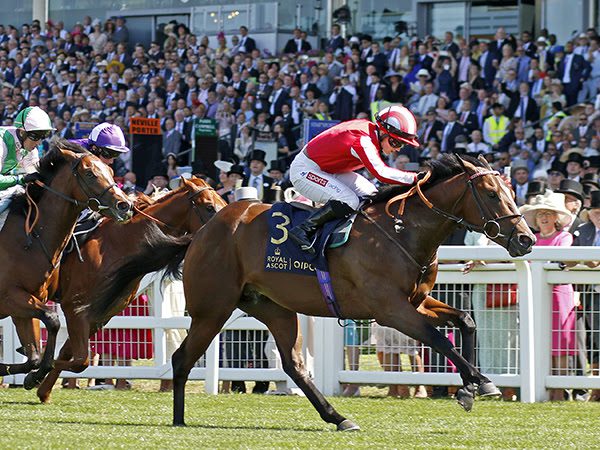 There is the usual feast of racing across Britain, Ireland and France on Saturday, but The Curragh is where it's at as the G1 Keeneland Phoenix S. provides the first coming together of the elite among Europe's precocious juveniles. It could boil down to a battle of the TDN Rising Stars Bradsell (GB) (Tasleet {GB}) and Little Big Bear (Ire) (No Nay Never), with Hollie Doyle and Ryan Moore in no mood to allow their mount's considerable reputations to slide. Bradsell is in a bit deeper than he was in the G2 Coventry S. at Royal Ascot June 14, but his insatiable appetite for work and racing will take him a long way against Ballydoyle's leading G1 2000 Guineas hope at present.

“I've ridden him in most of his homework since Royal Ascot at Archie Watson's Saxon Gate Stables and have been delighted with his progress,” Doyle said of Bradsell in her attheraces blog. “He's definitely strengthened up and is very professional in the way he goes about his business. It's going to be a tough assignment in what looks a stellar renewal, but Bradsell has a great mind and I wouldn't swap him for anything. The stiff track and the forecasted good ground should be ideal and I'm happy enough with my draw in stall six in such a small field.”

Ryan Moore is happy to be on Little Big Bear over the high-achieving Blackbeard (Ire) (No Nay Never), with his emphatic success in the G3 Anglesey S. over an extended six furlongs here July 16 marking him out as a colt with Classic pretensions. “He really was impressive here last time. He gave me a great feel,” his rider said in his betfair blog. “We will know who the number one juvenile is after this, I would imagine, and hopefully it is one of ours.”

Outside of the big two in the Phoenix, Amo Racing Limited's Persian Force (Ire) (Mehmas {Ire}) retains intrigue having bounced out of the Coventry to take Newmarket's G2 July S. July 7. Richard Hannon rates him alongside the likes of Canford Cliffs (Ire) (Tagula {Ire}) and normal progression could see him usurp the market principals. Amo's racing manager Emily Scott said, “It's a small but select and strong field, we go there with a lot of confidence that we've got a very nice horse and if he's come forward from Ascot as much as Richard thinks he has, hopefully he can put it to Bradsell and the O'Brien duo. As Richard said to me, whatever beats him, if anything beats him, it's going to be good.”

It's that time of year that the 2-year-olds really excite and away from the Phoenix, Saturday also sees a cluster across Europe with the pedigrees to enter the Classic picture with prominent displays. On The Curragh's card, the latest offering from Lillie Langtry (Ire) (Danehill Dancer {Ire}) emerges from Ballydoyle in Delightful (Ire) (Galileo {Ire}) in the Loder Irish EBF Fillies Race, Newmarket's fixture opens with a maiden that hosts the Juddmonte debutante Jalapa (GB) (Expert Eye {GB}), a half-sister to Westover (GB) (Frankel {GB}), and continues with the feature seven-furlong G3 Jewson Sweet Solera S. In the latter contest, Sheikh Mohammed Obaid Al Maktoum's homebred Novakai (GB) (Lope De Vega {Ire}) bids to back up an impressive 4 1/4-length winning debut at Doncaster July 16 and the Karl Burke-trained descendant of Ela Athena (GB) (Ezzoud {Ire}) is currently favoured over Gallop Racing's June 18 Listed Chesham S. third Lakota Sioux (Ire) (Sioux Nation) from the Charlie and Mark Johnston stable successful three times since 2014. “I was pleasantly surprised she did it so well at Doncaster and I've been delighted with her since,” Burke said of Novakai. “I wouldn't want the ground too quick, so we'll just have to keep an eye on that.”

Frankie Takes To The Shergar Cup

During what feels like a long goodbye tour for Frankie Dettori, he is at his favourite venue of Ascot on Saturday to take part in the Dubai Duty Free Shergar Cup for the first time since 2016. Other leading lights in the riding sphere on show include Christophe Lemaire, Kerrin McEvoy and Emma-Jayne Wilson, while at Haydock the G3 Betfred Rose of Lancaster S. sees Prince Faisal Bin Khaled's nine-length July 16 Listed Steventon S. winner Grocer Jack (Ger) (Oasis Dream {GB}) take on Shadwell's July 9 John Smith's Cup scorer Anmaat (Ire) (Awtaad {Ire}) from the Owen Burrows stable.