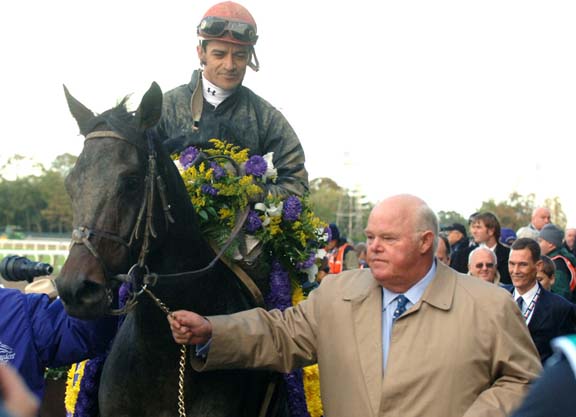 Over the decades, the Phipps Stable has campaigned a legion of homebred turf luminaries, but the historic name appeared in an unusual place two months ago as the buyer of a pair of yearlings at the Keeneland September sale. The stable returns to a somewhat more regular role when it offers 11 mares, including GI Breeders' Cup Distaff winner Pleasant Home (Seeking the Gold), through the Claiborne Farm consignment at the upcoming Keeneland November Breeding Stock Sale.

“It's not really a new direction,” co-owner and racing manager Daisy Phipps Pulito, who partners with her brother and mother to lead the stable founded by her grandfather Ogden Phipps and continued through her father Ogden Mills “Dinny” Phipps, explained. “Before my father got sick, he and I had talked about selling some mares and buying some new mares to add some new blood to our broodmare band. When he got sick, we decided to put everything on hold for a while.”

Dinny Phipps, longtime chairman of The Jockey Club, passed away in April, and the family gathered to discuss the stable's future and find ways to reinvigorate its 27-head broodmare band.

“After my dad passed away, my brother and my mother and I sat down and, along with [Claiborne's] Seth [Hancock] and [trainer] Shug [McGaughey], I said, 'I think this is something we still need to do if you guys want to revisit it,'” Phipps Pulito said. “And we all agreed to do it. So we went through our mares and looked at what families we had a lot of and sort of what we wanted to bring in to make our broodmare band stronger again. So we decided that these 11 mares were the ones that would be very valuable to other people and ones where we had a lot of the families.”

Pleasant Home, who sells in foal to the Phipps co-owned GI Kentucky Derby winner Orb as hip 543, was a romping 9 1/4-length winner of the 2005 Breeders' Cup Distaff. The 15-year-old mare is a full-sister to graded stakes winner Country Hideaway, who is the dam of graded stakes winners Boca Grande (A.P. Indy) and Vacation (Dynaformer). She is also a half to the dam of Grade I winners Point of Entry (Dynaformer) and Pine Island (Arch).

The decision to sell the Breeders' Cup winner was an emotional one for Phipps, who admitted she has a special tie to the mare.

“I love her–she is very special to me,” Phipps said. “I used to work for the Golf Channel and I was travelling about 40 weeks a year. I got off the road and I told my dad that I wanted to work in horse racing. He told me I had six months to do it–and now I've been doing it for about 12 years. But Pleasant Home was one that Shug and I sort of convinced him to run in the Breeders' Cup Distaff and after she won, he realized I kind of knew horses a little bit,” she laughed.

The 11-horse Phipps reduction at Keeneland November also includes Satisfaction (Awesome Again) (hip 581), a half-sister to Grade I winner Dancing Forever (Rahy) and from the family of champion Heavenly Prize and Grade I winners Good Reward and Oh What a Windfall. The 6-year-old mare sells in foal to Point of Entry. Sea Island (Pulpit), hip 590, is a 7-year-old daughter of MGISP Resort (Pleasant Colony) and a full-sister to graded stakes winner Sightseeing. She sells in foal to Hard Spun. The unraced broodmare prospect Secret Agenda (Malibu Moon), hip 593, is a 3-year-old daughter of champion Smuggler (Unbridled) whose second dam is champion and Breeders' Cup Distaff winner Inside Information (Private Account). Another unraced 3-year-old broodmare prospect is Sound the Trumpets (Bernardini) (hip 616), a daughter of My Flag (Easy Goer) and a half-sister to champion Storm Flag Flying (Storm Cat).

At this year's Keeneland September Yearling Sale, the Phipps Stable, with Ocala horseman Niall Brennan as agent, purchased a pair of fillies. The stable went to $430,000 for a filly by Tapit (hip 336) and paid $675,000 for a daughter of Malibu Moon (hip 581).

“We bought those two fillies in September and we will look at what we've got over the next couple of years, what we retire off the track, and we're looking to add one or two a year to freshen things up a little bit,” Phipps commented. “It's hard buying what we've got–we're not going to spend that kind of money for a lot of the top ones, but what we would really like is something that is relatively athletic that we can have a little bit of luck with on the track. But more importantly, we're looking for something that fits into what we want as a broodmare down the road. We would like to add one or two a year over the next few years. Niall Brennan and Seth and Shug have all done a good job of that over the years for other people, so we're sticking with that team for now.”

In discussions about the future of the stable, one thing which was never considered was abandoning the family venture.

“Never,” Phipps Pulito said when asked if there was any discussion of dispersing the family stable after her father's death. “Racing is something that's been really nice. We've all gone out and had our own jobs and our own careers and our own families and it was something that we always connected on and always met up with on the weekends. It's a real connection for us.”

Phipps Pulito is certain the stable's future is in secure hands.

“My dad and my grandfather set up a really good team for us,” she said. “Between Shug and Seth Hancock and Bernie Sams and Niall Brennan, it's such a good crew. I don't pretend that I know everything. Those guys are around our horses every single day, so we have a really good crew and we all work really well together. I'm not afraid to ask questions and they aren't afraid to give me the honest answers.”

The Keeneland November sale gets underway next Tuesday with a pair of Book 1 sessions beginning at 11 a.m. The sale continues through Nov. 20 with sessions starting daily at 10 a.m.