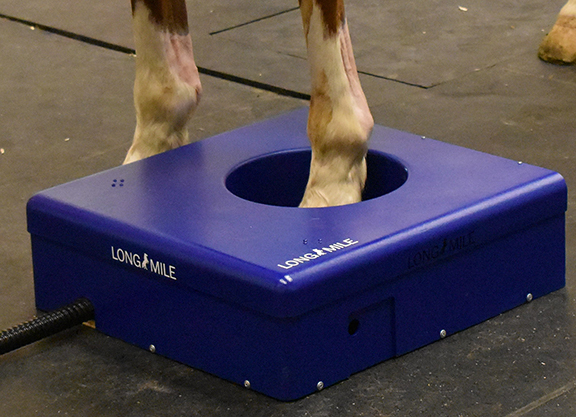 Earlier this month, The Stronach Group announced the arrival later this year at Santa Anita of the Longmile Positron Emission Tomography (MILE-PET) Scan machine-a technology currently under development at California’s UC Davis, that could revolutionize the diagnosis of emerging lower limb injuries that could deteriorate into something catastrophic.

But Santa Anita’s new PET scan machine might not be the only important development at the track. According to CHRB equine medical director Rick Arthur, efforts are afoot to possibly bring a standing MRI to Santa Anita.

The MRI machine’s possible arrival raises some interesting tensions between the two diagnostic modalities. Indeed, proponents of both technologies argue passionately about their individual merits in early injury detection. But what isn’t up for debate is how they both present a win for the horse. “It’ll help complement the diagnostics we offer here to our horses at Santa Anita,” said Ryan Carpenter, a Santa Anita-based private veterinarian. “And it will help us make better choices from a rehabilitation standpoint.”

What’s all the PET scan fanfare about?

PET scans, of course, are already widely used on humans. The basic working principle can be boiled down to the following: a radiotracer–a compound used to hunt chemical reactions–is injected into the body.

This radiotracer then works its way around the body’s blood vessels, seeking out areas of unusual chemical activity–in other words, injured sites the body is trying to heal. The radiotracer accumulates at the injured spot, and, under the eye of a PET scan machine, the troublesome area lights up. The brighter and larger the illuminated spot, the greater the potential problem.

Where an area lights up on a horse’s skeleton, this means there’s an unusual amount of bone turnover and bone remodeling occurring, said Mathieu Spriet, associate professor of Surgical and Radiological Sciences at UC Davis, and a driving force behind the institution’s new PET technology. “It’s telling us that at the molecular level, there’s something happening,” he added.

“It’s like taking a highlighter and saying, ‘look here, look here,'” he said.

Researchers at UC Davis today have collaborated on a machine that looks like a futuristic basketball hoop hovering just above the ground, called the MILE-PET. The hoop, which contains the detectors, opens and closes using magnets around the leg, quickly releasing if necessary.

This scanner will be put through its final paces this summer before it’s shipped to Santa Anita later this fall. And what then?

Current diagnostic technologies like scintigraphy, computed tomography (CT) and X-rays, however, don’t reliably pick up on these lesions, especially the more subtle ones, Spriet said, and as a result, veterinarians “don’t always recognize the horses who are at risk of breakdowns.” The early results with PET suggest that “we have a tool more powerful.”

To date, more than 120 horses have been imaged using PET at UC Davis. According to Spriet, “the spots that light up on PET corresponds to these areas where the fractures tend to occur, suggesting that we’re looking at these early changes before fracture.” In this regard, diagnosticians found better clinical correlation with PET than CT, said Spriet. (Read more about the value of PET in the racehorse fetlock here.)

Nevertheless, because the technology is so new, it’s still a Brave New World when it comes to how, when, and for what the machine is used. What would be useful, said Spriet, would be a long-term study of horses throughout their racing careers, scanning them periodically with PET to observe how their bones respond to varying degrees of training.

“It would be helpful to find out what’s normal for horses at the track, comparing 2-year-olds who start training versus an older horse who has been there longer,” he said.

For example, Spriet has observed through PET how some stress-related bone lesions can disappear within six to 12 weeks, while lesions that are a result of bone degeneration are more permanent.

“We know that racehorses are putting their joints under a lot of stress, and so it’s likely we are going to see some changes,” said Spriet. “The question will be being able to make the difference between the ones who do have changes but who can keep training, and the ones who should not keep training with the changes, because of the risk of breakdown.”

One big advantage that PET has over some other modalities is its ability to quantify changes in the bone. This change is valued using a measurement called Standardized Uptake Value (SUV). Normal bone activity has an SUV of approximately five. Spriet then showed me a PET scan image with an area lit up to an SUV of 25. “So, it means that, in this location, the bone turn-over is five times higher than what it is in normal location,” he said.

“That’s very unique of PET. MRI cannot reliably do quantification,” Spriet said. “The PET alone provides all the information we need for screening horses. The ability to quantify it, gauge severity, then get some data how they’re doing over time. That’s what makes this tool more powerful.”

The Case for MRI

Not so fast, said John Peloso, veterinary surgeon and owner of the Equine Medical Center in Ocala, Florida. “PET scan is a brand-new idea,” he said, explaining how new technologies lack a track record of results. “It might be a Learjet. It might not be.”

Veterinary medicine tends to be 15 years behind human medicine, he added. “Do we want to wait 15 years, or do we want to use something that is shown in human and equine medicine to be all that we need?”

That something, said Peloso, is the MRI machine–a diagnostic tool that has been used to examine racehorses since the mid-aughts. “When you’ve got a $15-million draft pick and he’s hurt, what do they do to him to figure out if he can compete or not? They do an MRI.”

The standing MRI–the one potentially coming to Santa Anita–resembles a large enclosed storage unit, its dimensions

Peloso argues that the MRI is proven at detecting problems in the lower limb early, before they worsen in potentially catastrophic ways.

“Disease takes a while to develop,” Peloso said. “For the fetlock, in my opinion, standing MRI is the answer,” he added. “Standing MRI does an excellent job at identifying horses that are on this disease continuum that’s going to get them in trouble.”

The research, he said, supports his claims. For example, this review study found that MRI was the “most sensitive” and “most specific” imaging test for diagnosing stress fractures of the lower limb of humans, when compared to scintigraphy, X-rays, CT and ultrasound. This study out of Newmarket looked at the fetlock joints in 131 Thoroughbred racehorses, and found that in nearly 40% of cases, the MRI detected problems “consistent with fracture pathology” which didn’t show up under X-ray.

“I can show you some cases of horses where you’d go, ‘oh my god, were we a breeze away from that thing coming apart?'” he said, highlighting how, in many cases, the outward warning signs like visible lameness can be very subtle or even non-existent. “Most everybody says they have no idea.”

Peloso theorizes that the cycle reaches critical mass around the time horses have their first few races.

“It’s my opinion that we haven’t cycled that ankle enough unless we are looking for a race, or they’ve raced a time or two. That’s about the time when condylar fractures become apparent,” he said.

Certain race meets, he added, tend to attract larger populations of horses that fall within that criteria.

“I feel like Del Mar and Saratoga are unduly punished because they get the population of racehorses around that time, of the appropriate number of cycles that have happened,” Peloso said.

“The key is to change the way you cycle the ankle, to give the healing bone a chance to catch up,” Peloso said. “It’s not about the racetrack–it’s about cycling bone. It’s a bone-disease process. The racetrack doesn’t create anything–the racetrack is just what’s there when we’re cycling the ankle.”

The MRI machine, therefore, could be used in preventative fashion, targeting horses that fall within that window. “That’s fertile hunting ground,” Peloso said. “If we could have this machine up at Saratoga, I 100% believe we would identify horses and prevent severe injury.”

Using the MRI before that window, he said, is something of a wasted endeavor. “When someone asks me to do an MRI on a 2-year-old-in-training, I try to discourage it because I really want to give them something when I’m done,” he said. “If the ankle hasn’t cycled enough, I feel like they’re going to spend their money and not be happy.”

The question, therefore, is why isn’t MRI used more prevalently? “It’s a slow melt,” Peloso replied. “You know how it is with this industry–different ideas are not always immediately welcome.”

Peloso has been using the standing MRI since 2008, but he estimates that he has only scanned the fetlocks of about 50 Thoroughbreds in training. Indeed, there are between 60-65 standing MRI’s found around the world, for use in all equine disciplines, not just horse racing.

Part of the reason the MRI hasn’t been more fully embraced is the cost. It takes roughly 45 minutes to an hour to scan both fetlocks, and it costs roughly $2000 to image two areas, said Peloso.

In comparison, Spriet estimates that the PET scan can image six areas–four fetlocks and two knees, for example–during the time it takes the MRI to image two. The costs are up in the air still, but Spriet said that the faster scan time contributes to making PET more affordable than MRI.

Nevertheless, Santa Anita veterinarian Carpenter cautions, as does Peloso, that PET scanners “are still a research modality today, and they have not made the jump into clinical practice.”

There are two equine clinics in Los Angeles with MRI machines, and Carpenter said that his clients have been largely reluctant to use them due to the logistics involved with travel, and time spent away from the barn.

“I believe when you get PET scan and MRI equipment on site, so that all they have to do is walk over and back, and they can be there and back to the barn in a couple hours, I think the sky’s the limit,” he said. “It’s going to be ground-breaking, and I’m really excited to see what diagnostic imaging in the Thoroughbred fetlock looks like in two years from now.”